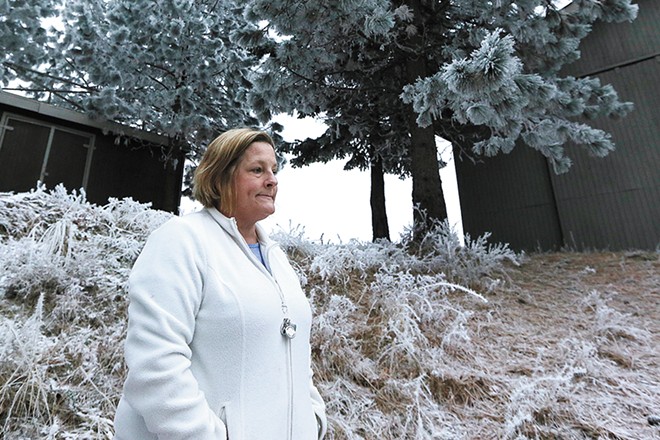 At a packed state Senate committee hearing in Olympia on Monday, Ami Strahan, mother of the 15-year-old victim in the 2017 Freeman High School mass shooting in Spokane, testified in favor new gun control regulations getting pushed in the 2019 legislative session.

The pair of bills proposed by state Attorney General Bob Ferguson would ban untraceable and undetectable "ghost guns" that can't be picked up by metal detectors — such as plastic guns made from 3D printers — and outlaw high-capacity magazines that can hold more than 10 rounds except for on shooting ranges and for military and law enforcement personnel.

Strahan spoke to the merits of the legislation limiting high-capacity magazines, citing her own son's death. "Three of his classmates were injured physically, countless others emotionally, but Sam was the only one who died that day. It’s not right to call that luck, but it wasn’t supposed to be that way," Strahan told the Senate Law and Justice Committee on Jan. 21. "The shooter’s AR-15, equipped with a high capacity magazine, jammed, meaning that he had to use a pistol instead."


"The shooting happened at class time, meaning that the hallways were full of children," she said. "If his rifle hadn’t jammed, just imagine the carnage that would have happened that day."

On Sept. 13 2017, Caleb Sharpe, a sophomore at Freeman High School, southeast of Spokane, brought two guns to his school — including an AR-15 semi-automatic rifle. When he tried to fire the rifle, it jammed, prompting him to use the second weapon, a pistol, to injure three students and kill Sam Strahan.

"High-capacity magazines make it easier to shoot more people faster," Strahan said at the hearing. "If the shooter had been able to use his military-style weapon with a high capacity magazine, there would be even more Freeman mothers like me mourning their children’s lost futures."

"It has to stop somewhere," she added.


At the Jan. 21 hearing, Strahan testified alongside Ferguson and Michael Van Dyke, a pediatric critical care physician at Providence Sacred Heart Medical Center in Spokane, in favor of the legislation.

"In September 2017, when I got call to come urgently to work, I was eager to come help my colleague," Van Dyke said. "When I found it was because a student had opened fire at Freeman High School, I was devastated. Another preventable tragedy had occurred — and this time in my backyard."

The prime sponsor of the bill restricting 3D-printed guns, state Sen. Manka Dhingra (D-Redmond), cited the security issues courthouses have with plastic guns and her experience as a former prosecutor. "I would never want these guns to come into the courthouse and bypass the security machines that we have there," she said. "By limiting the creation and distribution of 3D-printed guns, we are reducing gun trafficking and saving lives."

Opponents of the bills also showed up en-masse at the Jan. 21 hearing, arguing that the legislation amounted to an unnecessary attack on law-abiding gun owners who use firearms for self-defense.

Jane Milhans, a firearm instructor and former chair of the Pierce County Republican Party, said that she was once attacked by two men in her home and that women in similar situations need high-capacity magazines to defend themselves. "It’s a woman’s right to own firearms for personal protection. It levels the fight between her and her personal attackers," she said. "In a personal defense situation, it may take more than 10 rounds of ammunition to stop a threat."


"This bill puts women at a dangerous risk of being defenseless," she added.

Tom Kwieciak, a lobbyist representing the National Rifle Association who testified at the hearing, pointed to a study of a now expired 1994 federal assault weapons and high-capacity magazines ban as evidence that gun control doesn't limit gun violence. (The study showed mixed results: While criminal use of banned guns declined temporarily after the law went into effect, the study's authors were hesitant to declare that reauthorizing the ban would lower victimizations from gun violence.)

He also claimed that a large number of lawful gun owners already own and use high-capacity magazines.

"We’re talking about magazines owned by a large majority of the firearm owners in the state of Washington, your constituents," Kwieciak told lawmakers.

During her testimony, Strahan stressed that the bill wasn't the final cure for gun violence.

"No one law alone can prevent all gun violence, but there is more we can do to keep our communities safe," she said. "It’s time for our legislators to do their part."

Chair of the Law and Justice Committee Sen. Jamie Pedersen (D-Seattle) tells the Inlander that both bills could potentially get voted on by the committee on Jan. 24. But there is also the chance that it may be delayed. "We know that there are going to be amendments. We just have to work through that," he says.