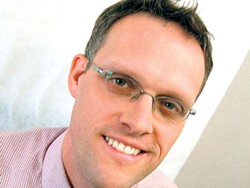 Not your typical afternoon in Spokane’s City Council chambers, but Snyder is not your typical City Council member. Yes, he’s a small-business owner and a white male, but the 40-year-old publisher of Out There Monthly is also a bike-riding, unapologetic progressive, who’s more likely to be seen digging through crates of old vinyl than gladhanding at the Spokane Club.

Two days into his new gig, the new council member sat down with us at the Rocket Bakery to talk about acclimation and what’s down the road for the city of Spokane.

INLANDER: Do your and Amber Waldref’s victories represent a progressive mandate?

SNYDER: I think you could say it’s a little bit of a [mandate]. I feel that that progressive wave has always been there in the city [but] it hasn’t always been represented by the folks on City Council. Both me and Amber definitely have strong progressive tendencies, but we also are really concerned about things that are hard to label — things that are really bipartisan, that, when it comes right down to it, it’s just a matter of economic development.

So what are some of those things on the Jon Snyder agenda?

I really think it’s time that the city looks really hard at adopting a complete streets policy. I mean whenever we re-do a street, we do it for all users — cars, bikes, pedestrians, public transit, the disabled and traffic calming. And that doesn’t mean that every single street gets every possible enhancement. It just means we follow the Comprehensive Plan, we follow the bike plan, and I hope we adopt a master pedestrian plan, at the city or the county level.

You’re big on diversifying our modes of transportation. How do we do it here?

There are a couple things that are being looked at right now: a downtown trolley and electric bus rapid transit. Those things are in their early stages.

I also think that now is the time for the city to get on the electric car bandwagon. The state of Washington has a whole bill that was passed last year talking about electronic car infrastructure. Seattle is gonna be a pilot city for the Nissan Leaf, one of the first plug-in hybrids to be sold domestically. They’re gonna get, I believe, 5,000 vehicles next fall. To prepare for that, they’re putting in [up to 2,550] electric car charging stations. I want people to be able to drive their Leafs from Seattle to Spokane. So I think Spokane is, by virtue of being in the state of Washington, in a good spot to take advantage of that.

It can be difficult to make an argument for these kinds of big projects at a time when the city is facing a $7 million shortfall.

I think it’s really easy to make that argument. What costs us money is when we have to go in and put in a bike lane or a sidewalk or some sort of traffic calming enhancement years later. It has to be done — like they’re proposing to do it up on Lincoln — all at once. It costs the city money not having this complete streets policy. We don’t want that stuff piecemeal. We need to do it comprehensively. It saves money… If we can get even a half percent of folks in this town to bike to work more than they are now, we see tangible dividends. The more costly option is to not act on that.

Do you expect to use your voice as a newspaper publisher to get your message out?

I don’t expect to use Out There any more than I already have. The things that Out There covers will always be connected to the environment, outdoor recreation. There’s no reason to change that. But I do think that being really proactive with your message [is a good idea]. Some people in city government work so hard that they forget to tell people what they’re doing. That’s unfortunate. I already have a Website — councilmanjonsnyder. com. [That] will have a blog, it’ll have my calendar. They can see what meetings I’m going to. I’m gonna send out a monthly e-mail newsletter that I encourage everybody to sign up to. Anything I can do to help increase that fl ow of information I think would be great.