From the wino to the train geek on your list

Giant panda bears are so adorable and cuddly, but they're kind of a nuisance if you happen to be the imperial gardener of Japan. The emperor of Japan received a panda as a peace gift from the emperor of China and then let it loose in the gardens. The panda wants to munch on all the bamboo and the gardener must maintain the flawless garden that the emperor demands. In this Japanese-themed action point game from the same designer who came up with 7 Wonders and Tokaido, two to four players score points by feeding the panda's out-of-control appetite, helping the angry gardener grow more bamboo and cultivating the garden in different patterns for the emperor. You can also spend some time admiring the cute panda game piece — he's clutching his big round belly in his greedy little paws.

The rules are: The rules are always changing. You don't even know how to win the game, at least not at the outset. It starts with the first rule, to draw one card and play one card. From there it gets complicated. Rules are added and changed until you have a whole set of directives, and the criteria for winning can shift at any time. "What?" you might be thinking. It's even more confusing when you play it. But the lack of monotony keeps the game lively. Monster Fluxx, rife with zombies, vampires, skeletons, Bigfoot and an angry mob of villagers, is the newest version of the Fluxx games. There's also Cthulhu Fluxx, Oz Fluxx, Star Fluxx, Pirate Fluxx, Monty Python Fluxx, Family Fluxx and Eco Fluxx. So you're guaranteed to find a version that fits your gift recipient's personality — as long as he or she isn't afraid of change.

It's a simple game of finding matching symbols, but add speed and an amusing group of people, and you can end up with a silly mess of fun. Each card has eight symbols — things like cheese, clowns and dolphins — and you have to find which one is on both cards. The game isn't as elementary-school as you might think. (You remember those days of circling "what doesn't belong"?) The symbols trick your eye with different sizes and the party version adds elements like mini-games. Best of all, it doesn't discriminate based on reading level, meaning it's good for playing with kids or foreign exchange students.

Tons of things have been zombified as of late: Jane Austen, donuts and romantic comedies, to name three. So why not a 17th century card game? Since it was invented, cribbage has become one of the most popular tabletop games of all time; it's finally undergone an undead makeover. Blood drips and internal organs hang out of the jack, queen and king in the deck of cards. The spilikins are no longer just boring old pegs, but zombies trudging across a cobblestone scoreboard. It's doubtful that cribbage would help much in the event of a real zombie apocalypse, but you never know. A zombie might take a liking to it and play a few hands with you before gnawing on your flesh. 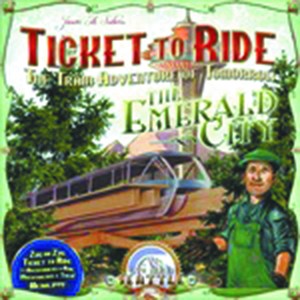 TICKET TO RIDE: THE EMERALD CITY

This fan-created expansion of the popular, award-winning game that has players claiming railway routes across North America focuses on the Northwest, fast-forwards to the late-20th century post-Steam Era and adds a few rules. Monorails are the future in Seattle, and players compete individually or in teams to try to find the best routes in the city. It's an ideal gift for train geeks and close enough for Inland Northwesterners.

With most board games you're competing against other players, trying to wallop them with point-defeating moves or amass your own fortune of money or estates. But in Pandemic, you're competing to be a hero and you're not even competing against players. All of you are contending against the game; talk about a morally upright game. The goal is to save lives, and ultimately the world. Breakouts of several virulent diseases have simultaneously infected populations around the globe. The idea is to eradicate diseases by researching cures and treating the people affected. All players act as disease-fighting specialists. There's an operations expert, a scientist, and in the 2013 version of the game, a contingency planner and quarantine specialist were added.

Godzilla tried it. Now you can choose to be an alien, giant robot or mutant monster and battle other beasts while destroying and conquering Tokyo. The game works by throwing dice and choosing whether to gain victory points, energy, health or choosing to attack another player. You can also draw cards that give you special powers like a nova death ray or growing a second head. King of Tokyo is a good game for mixed ages. Buy this game for a family with pent-up anger towards each other. It could be a cathartic experience for everyone to get to bare their inner monster.

If you weren't born into a vineyard-owning Italian family but you wish you had been, here's your chance. In this "strategic game of winemaking," — yes, a winemaking board game — each player has inherited small vineyards in pre-modern rural Tuscany. With only a few supplies and workers, each player tries to expand his or her vineyard by gaining workers and visitors, planting vines, building and selling wine. The most successful winery wins. Be sure to include a bottle or two of wine with this gift. It wouldn't be fair for someone to work so hard on a vineyard and never drink the benefits. ♦