Good reads for everyone on your list — history buffs, tech geeks, musically inclined folks, even liberals 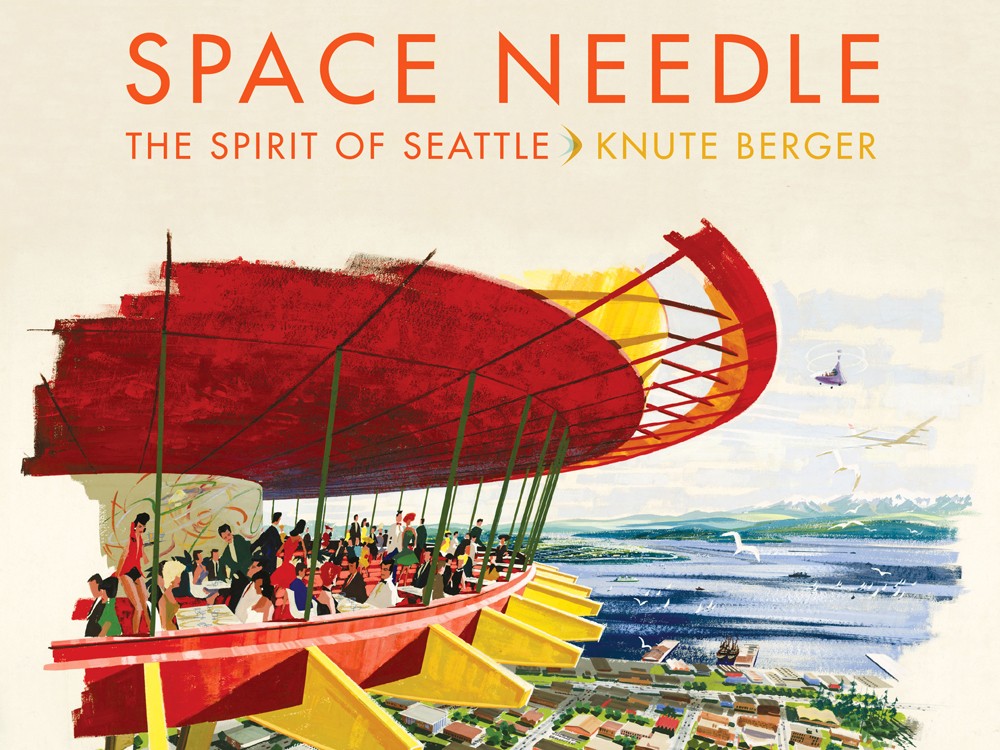 Space Needle: The Spirit of Seattle
By Knute Berger

This year marks the 50th anniversary of that other World’s Fair — Seattle’s Century 21 Fair of 1962. It was the fair that launched the Space Needle, the topic of this new book by noted Seattle gadfly and historian Knute “Skip” Berger. Along with recreating a can-do moment in recent Washington history, Space Needle: The Spirit of Seattle underlines how a kick-start like a World’s Fair can create a lasting legacy. But the stars of the generously illustrated book are the many architectural renderings of the Space Needle from that glorious Mad Men era of art and design. Scenes of glamorous people at dinner, floating high above Mt. Rainier and Elliott Bay, seagulls and jets flying by — done in that quick-sketch ’60s style — are pure romance. (TSM)

No Easy Day
By Mark Owen

If you saw the 60 Minutes segment on Mark “Not His Real Name” Owen, you know the backstory here: Navy SEAL spills the beans, in book form, on the Osama bin Laden raid, the Pentagon, never asked permission, flips out and said book — No Easy Day — knocks Fifty Shades of Grey off its No. 1 Amazon.com perch. This book does what good books can — takes you to a place you’d never go. In this case, that’s inside SEAL Team 6 for the month leading up to the raid, and the tense 40 minutes spent inside the bin Laden compound in Pakistan. There are two movies coming out this holiday season, but this account will take you deeper. (TSM)

The Chronicles of Downton Abbey: A New Era
By Jessica Fellowes and Matthew Sturgis

Downton Abbey is nearly a cottage industry, with Ralph Lauren tie-ins and “music inspired by” CDs. Now A New Era is out, the third companion book to dig deeper into all things Clan Crawley. Co-written by the niece of the show’s creator, it provides the backstory to the addictive PBS series. And it offers plenty of glimpses of the upcoming third season (which debuts Jan. 6), most notably wedding pictures of Matthew Crawley and Lady Mary. A New Era focuses most on the characters, and features personal insights by the show’s creator, Julian Fellowes. (Fun fact: The Earl of Grantham is modeled, in part, on Fellowes’ own father.) If somebody on your list is hooked on Downton Abbey, the beautiful pictures alone will make this a winner. (TSM)

Sometimes it’s just good to laugh. And one of those times is now, after one of the dumbest presidential elections ever. Who better to knock the hot air out of all the wind-baggery than Stephen Colbert? A book can’t be quite as good as the show, since current events drive his nightly skewering from his Comedy Central desk. Still, America Again is a lot better than his last book, I Am a Pole (And So Can You!) — that one almost seemed like it was for kids or something. For those who care about such things, the design is cutting-edge, and the writing, as you’d expect, is razor sharp. But mostly, it’s just plain silly. Oh, and it’s in 3-D. (TSM)

Rocker autobiographies can be amazing — Keith Richards’ two years ago, for example — or way, way less exciting than the music — Pete Townshend’s this year, if critics are right. But Neil Young, now there’s a truly deep dude. More impressionism than realism, Young meanders through his career — from careening down Sunset Boulevard in his legendary old hearse to cutting 1972’s Harvest to his fascination with electric cars. The subtitle is “A Hippie Dream,” and its 500-plus pages do feel like a stream-of-consciousness head trip. (At one point, Young admits, “I have only rewritten about one paragraph so far,” and, “There is no such thing as a spell-check for life.”) Dan Deluca nailed it in the Philadelphia Inquirer, saying Waging Heavy Peace is, “Like an epic jam with Crazy Horse… loose and baggy and always in the moment.” (TSM)

Wired magazine’s “This Day in Tech” blog has been logging massive page views for years with its odd blend of “on this day…” snippets about weird moments in science. Now its greatest hits — one per day, at least — are compiled in this fun-to-flip-through collection. Jan. 30, 1975: Rubik filed a patent on his colorful little cube. March 6, 1899: Aspirin was invented. Sept. 20, 1842: Sir James Dewar (not the Scotch guy) invented the vacuum flask, aka the Thermos. You get the idea. Each is expanded upon (but still kept brief) and polished up nicely in the way you won’t find on Wikipedia. A great choice for someone with a short attention span and an active mind. (TSM)

Go here if you want a lake of fire. Not just any lake of fire, but one set in Appalachia that serves as a mirror image of protagonist Dellarobia Turnbow’s crazy passion and a bleak harbinger of climate change. While pursuing a crush, Turnbow discovers the lake that then becomes swarmed with scientists, journalists and prophets, all seeking to make sense of, or cash in on, this strange wonder. Barbara Kingsolver, author of The Poisonwood Bible and Animal, Vegetable, Miracle, has been accused of overly sappy and political writing. Maybe so, but Flight Behavior will make you wonder what life would be like before we veer off the road to the apocalypse. (JO)

The Starboard Sea
By Amber Dermont

Amber Dermont’s first novel is set far away on the Northeast Coast. But the story — set amid the 1987 stock crash and while a major hurricane hits — wittingly or not seems to incorporate the large lashings the American consciousness has been taking. Jason Prosper is a teenager unimpressed with his family’s wealth and status. But the arrival of the hurricane involves Prosper in a secret kept by some of his friends. “The Starboard Sea is a novel about the exhilarating freedom of being young and in love with the world, in harmony with nature and with an irreplaceable friend,” writes the New York Times. (JO)

Sick of straight genre fiction and the musty musings of the conventional literary novel? The String Theory Quartet is named after a music group whose musicians exist scattered across the cosmos. Despite their unknowable distance, the musicians all share one phenomenon: Franklin Delano Roosevelt speaks to them. The sophomore effort of author Samson Graham-Muñoz, it’s a book that deals with the idea of loss, an apocalyptic tale not as bleak as your average zombie fare but startling nonetheless as it explores all the ways civilization could end up amiss of the universe. (JO)

If you want to give a gift of the fewest words with the most possible meaning, try Collected Poems by Jack Gilbert. Here’s a Gilbert poem: “After a summer with happy people/I rush back, scared, gulping/down pain wherever I can get it.” Simple, clean, stark. Gilbert, now in his late 80s, has been writing forever. He grew up in Pittsburgh, hung out with the beats in San Francisco and shut himself out from the regular literary cocktail circuit. In this book you’ll get the fruits of his decades-long efforts to capture human experience. (JO)

This Is How You Lose Her
By Junot Diaz

Junot Díaz nails dialect. When you turn the pages of his books you live inside the head of some character you never even knew and now don’t know anything about. This Is How You Lose Her, Díaz’s new story collection, keeps the intensity but brings back a handful of characters from his former works, including one from his Pulitzer Prize winning novel The Brief Wondrous Life of Oscar Wao. Take it a story at a time or gobble it down whole and then wander the streets in a literary haze. (JO)