Best Touring Broadway Musical of 2019-20
LES MISERABLES
After being nominated for multiple Tony Awards, the 2014 Broadway revival of Les Mis hit the road three years later, allowing audiences far beyond New York City to get swept up in its gripping, tragic tale of romance and revolution. And get swept up they certainly did. This musical's six-day run in Spokane last August left such an impression that you can probably still catch someone humming "I Dreamed a Dream." (EJI)
2nd PLACE: Miss Saigon; 3rd PLACE: Jesus Christ Superstar

Best Concert Venue
KNITTING FACTORY
There are only three Knitting Factories in the country: one in the heart of Brooklyn, the other in the booming music city of Boise, and then a third right here Spokane. The 1,500-capacity room fills the gap between venues that hold a couple hundred folks and the Arena, and last year brought a diverse lineup — from GWAR to Pete Yorn, the Offspring to Spokane semi-resident Tech N9ne — to the Inland Northwest. (NW)
2nd PLACE: Northern Quest Resort & Casino; 3rd PLACE: Spokane Arena

Best Cover Band
THE RUB
The three guys in the Rub can approximate sounds new and old, from all different genres. Nirvana, Led Zeppelin, Stevie Wonder — they'll cover it. The former Elkfest regulars play all over town, from free outdoor shows to private parties, and they recently headlined a benefit show that helped raise $10,000 for Coeur d'Alene's Schmidty's Burgers, which was closed due to fire. Rockin' and charitable! (NW)
2nd PLACE: Dragonfly; 3rd PLACE: (tie) GSB, Royale 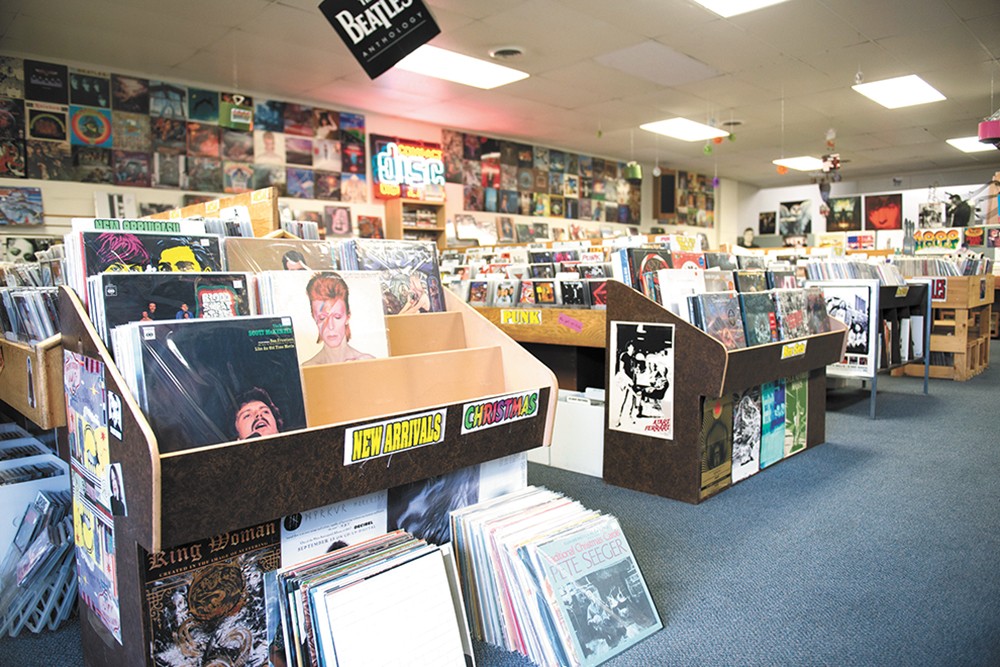 Derek Harrison photo
Stay calm and rock on at 4,000 Holes!

Best Record Store
4,000 HOLES
Continuing a multiyear hot streak of snatching this award, 4,000 is making the case that having the records people are looking for is only half of the equation. The other half, as it turns out, is having a face behind the counter that remembers what you bought last time and is always game for a long conversation about when Pink Floyd actually jumped the shark. (JS)
2nd PLACE: Resurrection Records; 3rd PLACE: The Long Ear, Coeur d'Alene

Whether you've joined the moshing (and swooning) crowds at an Indian Goat show, head-banged to "Year of the Slut" by Itchy Kitty (or swayed to its punk ballad counterpart "Year of the Goth"), or joined the raucous dance floor at a Vanna Oh! show, you've got some love for Corporat Records. The hyperlocal independent label continues to work with Spokane's best rock artists to bring you all the records, CDs and swag you can snag without spilling your Rainier. They're here to rock, and we salute them. (SAMANTHA WOHLFEIL)