Highlights from this season's concert scene

She's a member of the legendary country music pioneers the Carter family (she's a daughter of June Carter Cash from a marriage before June married Johnny Cash), and Carlene Carter has forged a music career with every bit of the rebel spirit that her ancestors had. Between releasing 12 solo albums, including three No. 1 country singles, she found time to marry British rocker Nick Lowe, collaborate with another romantic partner in Howie Epstein from Tom Petty's Heartbreakers, and lately tour a couple years opening for John Mellencamp. Her most recent solo work, 2014's Carter Girl, is filled with songs penned by the Carter family, and it's excellent. Myrtle Woldson Performing Arts Center, $20-$50, 7:30 pm (DAN NAILEN)

What more really needs to be said about Robert Plant? He was the soaring voice of Led Zeppelin. He's arguably the greatest rock frontman ever. He co-authored one of the most remarkable strings of albums by any band in history. That's all common knowledge at this point. But his post-Zeppelin work — not just as a solo artist, but as a collaborator with the likes of the Honeydrippers and Alison Krauss — is just as expansive and experimental as his classic rock output, an eclectic catalog that dabbles in folk, country, world music and traditional blues. Plant hits Spokane with his band the Sensational Space Shifters, which has backed the rock legend since 2012. First Interstate Center for the Arts, $61-$101, 8 pm (NATHAN WEINBENDER)

One of America's most heralded punk bands has matured into an adult pop-rock machine with their new album The Center Won't Hold. While Carrie Brownstein and Corin Tucker still deliver some searing social commentary in their lyrics, their new songs often look inward at what it means to be a 40-something woman in today's world — all of it soundtracked by a sound featuring their newfound love of synthesizers that give the new material a distinctly '80s sheen. Drummer Janet Weiss quit the band after the album was finished, so what Spokane gets on stage for the band's tour opener will be a mystery until the curtain rises. Martin Woldson Theater at the Fox, $33-$39.50 , 8 pm (DN)

ST. PAUL AND THE BROKEN BONES

Based around the killer vocals of frontman Paul Janeway, St. Paul and the Broken Bones is an eight-piece soul crew from Alabama guaranteed to get you sweating on the dance floor. With a monster horn section blasting throughout their three albums, the band recalls everyone from Al Green to the Isley Brothers to Sly Stone. If you like a band that can deliver an excellent slow jam one minute, and a fiery funk blast the next, you're in luck. Knitting Factory, $30, 8 pm (DN)

David Bowie never appeared to be a mere mortal. He was so ageless, so singular, so wonderfully alien that it seemed like he'd outlive us all. But since Bowie died in the cursed year of 2016, his legacy has only deepened. Of course, the real Bowie will never be duplicated, but impersonator David Brighton channels his essence, transmogrifying into Bowie's various personae, from Ziggy Stardust to the Thin White Duke. And since he'll be backed by not only his own band but the Spokane Symphony, all those timeless songs will have extra oomph. Martin Woldson Theater at the Fox, $28-$90, 8 pm (NW)

Songwriter MC Taylor pens tunes that immediately sound timeless. It's some combination of his raspy voice and penchant for using traditionally folky instrumentation — acoustic guitars, mandolins, steel guitars — in league with pounding pianos and organs that just makes every album he releases sound both utterly fresh, and straight out of the Tin Pan Alley sound of the 1920s. His newest album, Terms of Surrender, arrived Sept. 20 and just might be his best yet. The Bartlett, $21, 8 pm (DN)

Considering her parents named her Loretta Lynn Morgan when she was born, there was perhaps a little pressure from her country musician pop to join the family business. Good thing her torch-song pipes and an attitude that would make her namesake proud combined to make her one of country's brightest stars for much of the '90s, when she was the first woman in country to have three straight albums go platinum. Her 30-year career now includes more than 40 singles that hit the country singles charts, including three No. 1s in "Five Minutes," "What Part of No" and "I Didn't Know My Own Strength." Northern Quest Resort & Casino, $39-$59, 7:30 pm (DN)

With her sophomore album Historian, Lucy Dacus created one of 2018's best releases, a 10-song set she considers a concept album of sorts about "cautious optimism in the face of adversity," whether it be external, political adversity, or deeply personal. While there are seriously dark moments along its trajectory, the overall effect for the listener is thrilling, both at Dacus's skills as a songwriter and at the feeling of discovering an important new voice in modern rock. The Bartlett, $20-$26, 8 pm (DN)

Son Volt frontman Jay Farrar has sounded like an old man since he was in his 20s playing in Uncle Tupelo, and I mean that in the best way. Rarely has a voice and a band's songs merged quite so perfectly as in the alt-country tunes Jay Farrar writes. A couple years ago the band delivered an excellent show at the Bartlett that spanned their career all the way back to Son Volt's classic debut Trace. The band's latest album, Union, revisits the electrifying blues-rock of the band's last release, Notes of Blue, while addressing the issues dividing the country in lyrics that hearken to Woody Guthrie and other folk years of old. Lucky You Lounge, $25-$28, 9 pm (DN)

One of the hottest young stars in country, Tyler Childers doesn't like being pushed into an "Americana" label that seems like a convenient means for keeping old-school country folks like himself off country radio and arena stages. He won the "Emerging Artist of the Year" at the 2018 Americana Music Awards, and promptly delivered an acceptance speech that called the subgenre "purgatory" for a guy "who identifies as a country music singer." There's no questioning his authenticity when you listen to his new album, Country Squire, co-produced by fellow rabble-rouser Sturgill Simpson. Childers' show sold out in a hurry, so you'll have to hit the secondary ticket market to catch this one. Knitting Factory, Sold Out, 8 pm (DN) 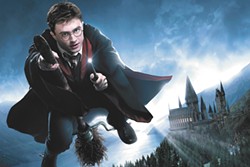 Are you sad you never received your Hogwarts acceptance letter and never got to experience true magic? Well, wizards, witches and muggles, the Spokane Symphony has a solution for you. On the weekend before Halloween, the symphony — along with actors, dancers and a magician — will come together to tell the stories of Harry Potter and bring the magic to life here in Spokane. The selection of music will cover Harry Potter and the Sorcerer's Stone, Goblet of Fire and Fantastic Beasts and the Crimes of Grindelwald. Along with this music will be spooky selections from Saint-Saens, Wagner and much more. $22-$55, Martin Woldson Theater at the Fox, Oct. 26 at 2 pm and 8 pm, Oct. 27 at 3 pm (RILEY UTLEY)

PIGS ON THE WING

There are a lot of bands floating around that are dedicated to paying tribute to Pink Floyd, but Portland's Pigs On the Wing bring a distinctly Northwest flavor to their shows. Made up of ace indie musicians, these Pigs deliver aggressive takes on the classic tunes, nodding to the originals' precise structures while adding some improvisational energy to the proceedings. At this show, they'll be performing Pink Floyd's Animals album in its entirety in one set, then selections of their favorites from the Roger Waters era of the band in another — all accompanied by a spectacular light and projection show. Bing Crosby Theater, $25, 8 pm (DN)

With his raspy but tender voice and heart-on-the-sleeve lyrical sentiments, Ray LaMontagne sounds like he was beamed straight out of the '70s singer-songwriter boom. Or back even further, because many of his songs, from the weary romanticism of his debut single "Trouble" to the heartfelt yearning of last year's "Such a Simple Thing," have the timeless quality of dusty old standards getting a new coat of musical paint. LaMontagne's upcoming Just Passing Through tour will be an intimate, acoustic affair and will no doubt feature selections from his most recent album Part of the Light. Martin Woldson Theater at the Fox, $40-$125, 7:30 pm (NW)

Both of these groups are worthy headliners on their own. The two trios are adept at producing incredible, intricate sounds from their instruments, moving with ease between rock, classical, jazz and world music. Their sprawling approaches are natural given that the California Guitar Trio consists of players from Japan, Belgium and America, and the Montreal Guitar Trio consists of, well, three Canadians — but from French-speaking Canada! With CGT on steel strings and MGT on nylon, the sound coalesces wonderfully into what should be a memorable night of music. Myrtle Woldson Performing Arts Center, $30-$40, 7:30 pm (DN) 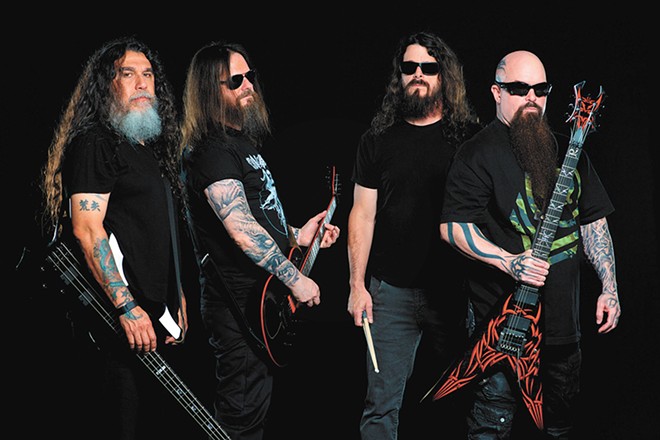 This is allegedly Slayer's retirement tour, so it just might be your last chance to catch this member of thrash-metal's so-called Big Four (alongside Metallica, Megadeth and Anthrax) before Tom Araya and Co. ride into a sunset of raining blood and hyperspeed riffs. And if catching up with 38 years (!) of gloriously "evil" Slayer sounds isn't enough to entice you, consider the all-star lineup of openers that includes industrial pioneers Ministry and prog-rock weirdos Primus. That's a lot of head-banging fun your bucks. Spokane Arena, $40-$90, 6 pm (DN) ♦