It takes all of about five seconds of listening to the first track on Myles Kennedy's new album to recognize it's going to be a significantly different listen than his 2018 solo debut, The Year of the Tiger.

While that album was a largely acoustic affair — albeit an often rocking acoustic affair — "Get Along" opens Kennedy's new release The Ides of March with a scorching burst of lead guitar from the Spokane native probably best known for his vocal skills fronting both Alter Bridge and Slash and the Conspirators. And those fiery guitar parts rarely let up over the course of the album's 11 songs, even as Kennedy's writing delves into an array of genres, touching on gutbucket blues, ear candy pop-rock, even something approaching prog-rock in the sprawling, nearly eight-minute title track.

Making a serious guitar album was definitely on Kennedy's mind even before he went to work on The Ides of March.

"It kind of started about three or four years ago. I rekindled my love affair with playing lead guitar," Kennedy tells the Inlander. "I started as more of a lead player when I was younger, that was my focus. I never intended to be a singer. It's so strange how it all played out.

"The challenge with this record is to kind of have a bit of a balance. I didn't want this record to be a full-on riff-rock record the entire thing. I wanted there to be some sonic hallmarks from the first solo record, and find a way to integrate that into album No. 2 and allow me the opportunity to play more lead guitar."

The Ides of March, hitting stores Friday, might not even exist if it weren't for the arrival of the COVID-19 pandemic. Kennedy was in the midst of touring for Alter Bridge's most recent album, Walk the Sky, when the pandemic hit, forcing the band to cancel tours of Asia and South America and sending Kennedy packing for home in Spokane. 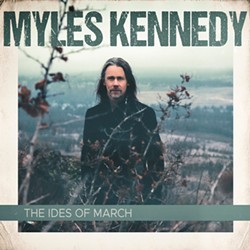 After a few days of getting his head around what was happening, and with no idea just how long the pandemic would last, Kennedy settled into a routine of waking up at the same time every day, exercising, meditating and then picking up his guitar. It was a rhythm to life that seemed strange to a guy who works as hard as anyone in rock between his two bands and solo career, and yet it's a lifestyle he says he's "really grown to embrace."

"The year prior [to the shutdown] I had been either on the road or in the studio for over 300 days, so I was starting to get a little bit burnt. The schedule is just relentless," Kennedy says. "[The break] came at an interesting time for me, just because I was kind of ready to power down for a little bit."

While Kennedy's songs can delve into some of humanity's darker impulses, he's inclined to look at a situation like the abrupt end of that Alter Bridge tour and the forced stretch at home "from a positive standpoint, instead of the obvious negatives."

That positivity manifested in the opportunity to hunker down and work on a ton of songs, many of which ended up on The Ides of March, and many of them reflecting on this very specific moment the world is sharing due to a mysterious disease. When you spend so much time on tour, having months on end to write is a blessing for someone as driven to create as Kennedy.

"It has allowed me to do what I love really more than anything, just write nonstop," Kennedy says. "At the end of the day, that's the part of the process I enjoy the most. I love playing live, don't get me wrong—I love that rapport with the fans and being on stage and seeing people and hearing the songs sung back to us. But I really do love that creative process."

The unexpected window of time let Kennedy write for basically six straight months, day in and day out, before he piled in a car with his drummer buddy Zia Uddin and bassist Tim Tournier and drove all the way to Florida to record The Ides of March.

Kennedy's Year of the Tiger wasn't just different from the new one in its overall sonic approach; lyrically, that album's deeply personal look at the childhood loss of Kennedy's father has given way on The Ides of March to a series of songs with an expansive view of the world. Knowing most of them were written during the pandemic undoubtedly lends to reading those lyrics a certain way, but Kennedy's skills as both a songwriter and lyricist assure the songs will remain relevant beyond this particular moment in time.

Take that opening song "Get Along" as a case in point. It was written in March 2020 as Kennedy reflected on the Rodney King police brutality case of the early 1990s, with King's famous plea for everyone to "just get along" working its way into Kennedy's chorus. Kennedy starts the song remembering "the moment the gavel brought the fires and rage" of the Los Angeles riots, when the cops who beat King were acquitted. Just a couple of months after Kennedy wrote the song, the country again burst into protests after George Floyd's murder by a police officer.

"I remember those days well, and it really did have a profound effect on me. It really broke my heart to see how that went down," Kennedy says of the King case and ensuing violence. "I went back to that set of emotions and started to write about that, but trying to paint with a broad enough stroke to have it be fitting for where we are as human beings in this day and age.

"A cynic could look at that phrase and be like, 'Oh, why can't we just get along? It just seems so simple.' But the innocent side of me longs for that so much."

"Get Along" is far from the only song on The Ides of March when Kennedy's innate optimism comes through. The upbeat "In Stride" encourages listeners to keep a little perspective during troubled times. The title track is an epic Zeppelin-esque tale that musically came to Kennedy in a dream, and lyrically starts as a warning of a dark future before its latter half assures listeners that "cool heads prevail in times of change." Another song, "A Thousand Words," suggests that "in times like these, we must live and learn."

Listening to the album as a whole, and particularly zeroing in on Kennedy's lyrics through his layers of stinging guitar leads and slippery slide-guitar work, you get a thematically consistent set of songs that can be downright inspiring.

"A lot of the dialogue [in the songs] is to me, to remind myself a lot of times," Kennedy says. "I never want to come across as preachy. That's always my fear as a songwriter, and I have no intention of doing that. But because of the way I'm hard-wired, and because I've always needed to be reminded of certain things, I find that having the opportunity to write songs is cathartic for me. It's brought so much healing to my own life."

No doubt many of Kennedy's fans feel the same about his music. ♦

Myles Kennedy's The Ides of March is released Friday, May 14. Visit myleskennedy.com for more information and clips of him performing some new songs solo at Spokane's Fox Theater.