New vendors prove seniority is not synonymous with quality at Pig Out in the Park. 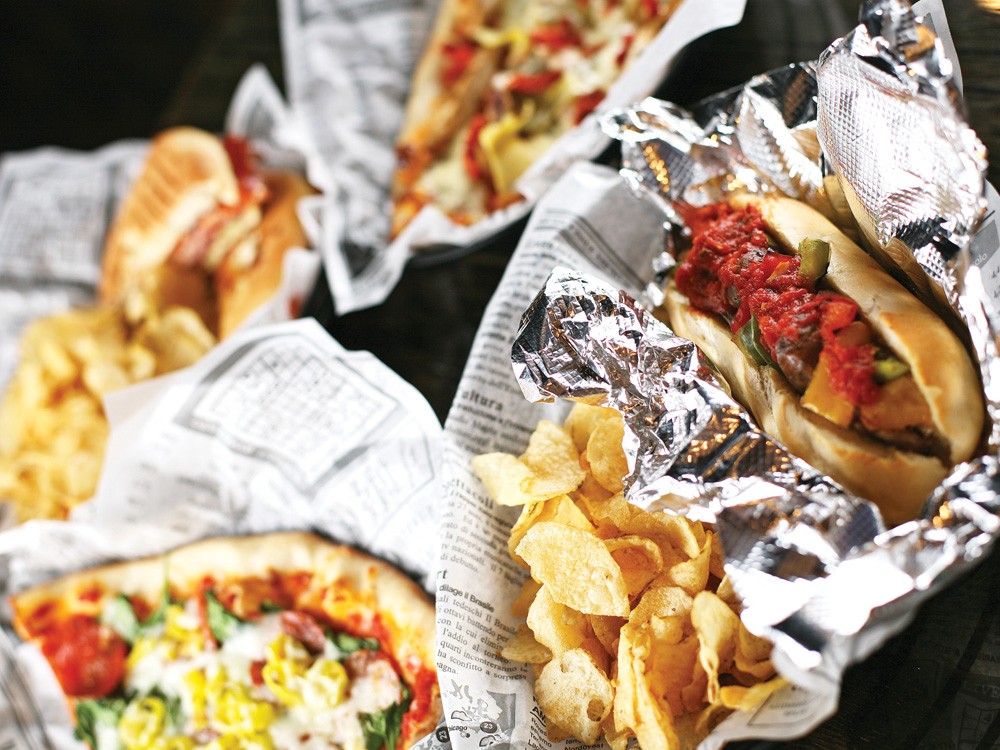 Pig Out in the Park earns its name. Over 50 vendors are converging on Spokane’s Riverfront Park this week from as far as Utah and Texas to dish out diverse, digestible delights for your face-filling pleasure. But 31 of these places are local, and seven of them are first-year greenhorns. Stop by and check out what the newbies have to offer while enjoying your other favorites.

CIAO MAMBO recently opened a restaurant in downtown Spokane. Specializing in Italian cuisine of all sorts, they’re selling pizza by the slice this weekend. Sample the Rustica made with grilled vegetables, goat cheese, and their homemade tomato sauce. Or try the Con Pollo with grilled chicken, artichoke hearts, sun-dried tomatoes, and Gorgonzola cheese. But if you crave something more traditional, their gourmet pepperoni will make you plenty happy. Find them just west of the Rotary Fountain.

COUPLE OF CHEFS CATERING is run out of both Spokane and Airway Heights by Allen Skelton and Joile Forral, who successfully mix traditional dishes with more inventive ones. Try the chipotle barbecue pulled-pork sandwich, served with a honey cumin slaw, or their Korean pulled-pork sandwich, with a wasabi coleslaw. They describe their Grit Frites as a “cross between mozzarella sticks and french fries,” and they’ll dish out ice cream sandwiches with banana ice cream between homemade chocolate chip cookies to finish it off. Find them north of the Bloomsday statues.

FROYO EARTH, which operates stores in downtown Spokane, at Wandermere and in the Valley, allows patrons to dispense and top their own frozen yogurt, creating original masterpieces. The booth at Pig Out is no different, offering red velvet, cake batter, and vanilla yogurt, with key lime sorbet and pomegranate raspberry rotating. Sprinkle your concoction with their generous supply of various fruits and candies. Spot them along the river, east of the gondola station.

JUPITER JANE TRAVELING CAFE originates in Sandpoint but takes its decked-out kitchen/school bus anywhere it’s needed. Try the shrimp or chicken tacos with a mango salsa, and complement them with the JFK salad (mixed greens, cranberries, walnuts, apricot, mozzarella, and a huckleberry vinaigrette dressing). Complete the meal with traditional profiteroles drizzled with chocolate and whipped cream. All this and more, south of the gondola station.

LASAGNA’S ON YA opened its doors in north Spokane last October, delivering hand-mixed meats and homemade sauces at its family-owned establishment. They’ll be serving rolls alongside a classic lasagna with ground beef and Italian sausage; a Tuscan chicken lasagna with artichokes, olives, bacon, and a creamy pesto; and a vegetarian lasagna with fresh veggies and a hearty red sauce. Top it off with their tiramisu, all to be found north of the Bloomsday statues.

MARIA’S ORIGINAL MEXICAN FOOD hails from Medical Lake and invites you to peruse a menu consisting entirely of fresh and handmade Mexican dishes. Maria will be plating beef, chicken, and pork combos with rice and beans. Accompany it with corn tortilla taquitos, her Torto- American Sandwich, or try the deep-fried flour tortilla with ice cream for dessert. Visit her west of the Rotary Fountain.

MOMMY G’S GRILLED CHEESE is a trailer-vendor selling amazing, gourmet grilled-cheese sandwiches with a side of tomato basil soup in downtown Spokane. Indulge in the French onion melt with gruyere, caramelized onion, and sauteed mushrooms. Or Sammy’s Sammich, with cheddar, smoked bacon, and avocado. Or Le Frommage, with fontina cheese, sun-dried tomato pesto, and baby spinach. Try the Challah Berry (mascarpone on challah topped with fresh berries and fruit) for an incomparable dessert. Seek them out north of the Bloomsday runners.

Once you’ve gorged yourself on pulled pork and deep-fried cheesecake, flop your bloated belly onto the grass and listen to some music. Too Slim and the Taildraggers and Charlie Musselwhite kick off the festival on Sept. 1. Musselwhite is a blues legend, backed by a young boogie-woogie band. Listen for smooth vocals and harmonica solos low-down-and-dirty enough for Folsom prison. Local favorites Too Slim and the Taildraggers deliver gritty rock ’n’ roll numbers with hefty doses of country and rhythm and blues. The result is the perfect Americana musical cocktail.

Rock ’n’ roll hall of famer Leon Russell plays Sept. 2. The easy-listening singer/songwriter and piano virtuoso is like an orange shag carpet from the 1970s. Warm, soft on the ears, nostalgic and easy to get tangled up in.

Carbon Leaf shakes things up on Sept. 3. The band’s bluegrass-infused indie rock is the perfect summertime music. The vocals are twangy, and stringed instruments are plucked more often then strummed. Listen for songs about lemon sticks and fireflies.

Do you smell sex and candy? One-hit-wonders Marcy Playground are plagued by their 1990s alternative-rock hit about disco super fly and double cherry pie. But if you listen a little further into the band’s musical repertoire, you’ll find that nightmarish songs like “Opium” are pretty f---ing good. The 1990s were weird — it’s not their fault. Give them a second chance on Sept. 3.

Peter Rivera and the MarchFourth Marching Band round out the Pig Out festivities on Sept. 4. Rivera is the original lead singer of Rare Earth, a band that sprung from Motown in the 1970s. These days, the drummer and lead singer (that’s always impressive) is still funkalicious and soulful, bringing back hits like “Get Ready,” “Hey Big Brother,” and “Born to Wander.” And then there’s Portland’s MarchFouth Marching Band. The crazy instrumental brass band not only tends to bring a troop of stilt walkers and fire dancers but the music is phenomenal. The horns are just playful and raunchy enough that you’ll forget all the calories you’ve consumed and instead feel like you’re partying in New Orleans. (Jordy Byrd)

Speaking of Pig Out In The Park , Festivals