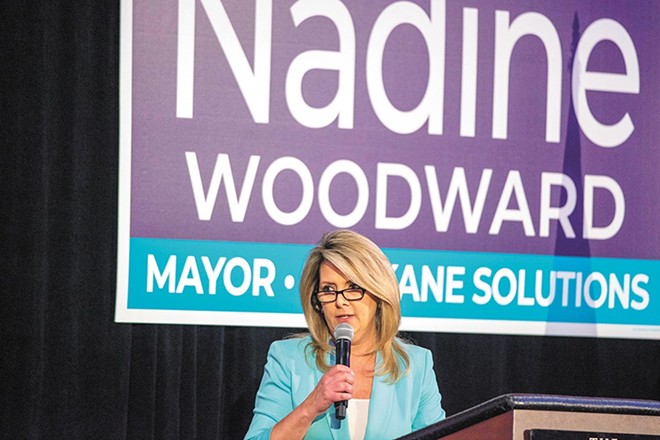 Daniel Walters photo
Nadine Woodward's solution to homelessness is modeled after Marysville.
Since Nadine Woodward launched her mayoral campaign, she's touted ideas that generally promote "accountability" for people who are homeless, concerned that Spokane should not copy what are perceived as softer policies out of Seattle.
She's against opening a 24/7 shelter, though she says she is willing to consider tent cities. She's raised the idea of banning homeless people from the library. She's been critical of low-barrier housing and shelters, arguing those approaches only enable those who are homeless.

But her overall vision, she says, is based on a city just north of Seattle: Marysville, home to roughly 70,000 people.

"I have a plan — it's modeled after the one in Marysville, Washington — that gets people through the process and actually gets them to be functioning members of our society again, not just keeping them in 24/7 shelters where they're not getting the help that they need," she said in a debate that aired on KHQ last week.
Marysville advertises its approach as one that gives those experiencing homelessness a choice: Get treatment, or go to jail. It's the exact kind of tough-on-homelessness idea that voters who feel city leaders aren't doing enough to address the problem might flock toward.

But Marysville's so-called "zero tolerance" approach, which has made local and national headlines, isn't actually as strict as it initially may sound. Spokane has a similar program in place that pairs social workers with police officers to encourage people to seek treatment. And one could argue that Spokane is tougher on people experiencing homelessness than Marysville: Spokane's approach breaks up homeless camps quicker, Spokane has a law preventing people from sitting or lying on public sidewalks unlike Marysville, and Spokane will arrest people right away for outstanding warrants.

Marysville started its embedded social worker program about a year and a half ago, as an expansion of a program in Snohomish County that had been showing positive results.

The idea is pretty simple, as Marysville Mayor Jon Nehring describes it. One social worker and one police officer work together, and when they encounter someone who is homeless and battling addiction, they will encourage them to get into treatment instead of arresting them right away for outstanding misdemeanor warrants.

"Our goal is to be successful in getting them into treatment, not to put them in jail," Nehring says.

To be clear, Nehring says police will put people in jail for the warrants they were going to arrest them for anyway if someone repeatedly refuses treatment. If it's a felony warrant, they'll be booked into jail right away regardless. But usually, it's a process. Nehring says they may contact the same person up to eight times in the span of a few weeks to encourage them to get into a place to detox, like the county's Diversion Center, which provides a safe place for people experiencing homelessness to be connected to housing or treatment. At that point, if the person has an outstanding warrant for theft or something drug related, the officer will be an advocate in the courtroom for them.

It's "zero tolerance" in the sense that Marysville won't allow people to freely walk around with warrants, illegally camp and use drugs without some kind of consequence, he says.

"You cannot, in Marysville, just shoot up drugs every night and sleep on someone else's property," Nehring says.

But at the same time, they'll give you plenty of chances.

"We don't just say, 'They don't want to take treatment, then move on and let them exist under the bridge for months or years on end," Nehring says. "We're patient, and by far the best choice for everybody involved is for them to get into treatment,."

The program has seen results. Nehring says 99 individuals have gotten into inpatient treatment, and just over half of those have graduated from treatment. A little over 100 have been temporarily housed.

It's not far off, however, from what Spokane is already doing.

The program looks pretty similar to one that Spokane Police launched last summer that has the goal of getting people suffering from addiction, mental illness and homelessness connected to services that keep them out of jail and the hospital. Spokane's Community Diversion Unit has four mental clinicians from Frontier Behavioral Health riding along with police officers five days a week.

"We need accountability when it comes to providing services and programs for the homeless."

Like Marysville, people with felony warrants are arrested either way, but officers have discretion if they see someone committing a low-level misdemeanor. And like Marysville, the program aims to get people the help they need.

"The goal is to get them into services, a treatment program or some other sort of program to get assistance and help, so that we're not having to arrest for the behaviors that take place later on down the road," says Spokane Police Lt. Steve Braun.

But if someone has multiple misdemeanor warrants out?

"That's a court order from a judge," Braun says. "We have to take that person into jail."

Woodward supports Spokane's program pairing social workers with police. But she tells the Inlander in a phone interview that she would like Spokane to take it a step further — not necessarily by making more arrests, but by being more diligent in helping people get treatment. She says the difference in Marysville is that their system "holds their hand every step of the way," adding that, "we don't do that here." She would want Spokane to help people all the way through detox, treatment, transitional housing and job training.

"Once you're new in your sobriety, you need someone to really help you navigate the world of sobriety," Woodward says. "And we have to do that with people who are helping them every step of the way."

But what about Spokane's Community Court? Launched in 2013, it's an alternative court where people accused of low-level misdemeanors are connected with services instead of jails. A recent study found that it lowered recidivism rates and that defendants were able to access services at a high rate.

Unlike Spokane, Marysville doesn't have a sit-lie ordinance that prevents sitting or lying on public sidewalks. Nehring says it's not much of a problem anyway.

"If someone's simply sitting in a public space, we're not going to deal with them the way I described other situations," he says.

But in Spokane, violators are then referred to Community Court. And Spokane has a stricter timeline when it comes to illegal camping: In June, the city announced a new approach that gives campers 48 hours to leave. In just one month, the city broke up 169 camps and referred 60 people to Community Court.

Marysville, meanwhile, just opened its own community court a few months ago.

Woodward's opponent, City Council President Ben Stuckart, has long been a supporter of the sit-lie ordinance precisely because it directs people to Community Court where they can get services. In fact, he says he'd like to expand it outside of the downtown area.

However, Stuckart disagrees with the idea that those who refuse treatment should then be thrown into jail.

"They should be cited if they have outstanding warrants, and if they're misdemeanors they should be going to Community Court," Stuckart says.

Woodward also suggested to the Inlander that, like Marysville, Spokane should convince the community not to give to panhandlers.

"They convinced their community not to give to panhandlers. That was the first step that they said allowed them to launch the program that they're operating under right now, and I think that's something that maybe we should look at as well," Woodward says.

Kind of like the Give Real Change campaign launched by Mayor David Condon, in which the city installed orange meters and large street signs encouraging people to donate instead of giving to panhandlers?

"I don't know how effective that's been because I see panhandlers all over town," Woodward says.

While there may be similarities between Marysville and Spokane when it comes to the approach to homelessness, it's hard to compare the two. "We're not Spokane. We're a city of 70,000 people. If you take 60 people off the streets here that's a pretty big dent in our population," Nehring says.

Stuckart says Marysville has more transitional housing available, which is something he says Spokane needs. Meanwhile, Stuckart calls it "bullshit politics" that Woodward says Spokane needs to "start enforcing our laws again" pointing to Marysville, even though she voted against the public safety levy to add more police officers.

Asked by the Inlander what laws she thinks are not being enforced, Woodward says, "I hear all the time people talking about open drug use publicly that's not being prosecuted, drug deals that are happening all over town and people aren't being arrested and prosecuted." She says more officers need to be downtown on foot patrol, using more of a community policing model.

Lt. Braun says the idea that police are not enforcing laws is "inaccurate." Though he does say that a lack of resources may sometimes prohibit police from investigating everything.

While Marysville has a warming shelter in the winter, it has a contract with Everett to provide shelter beds. That allows Marysville to follow the Martin vs. Boise decision that found cities can't punish people for sleeping outdoors if there's no shelter space available.

Stuckart has pushed for a permanent 24/7 shelter, but the city is still looking for a place to put it. Woodward opposes a permanent shelter, but she's been open to temporary alternatives like warming centers.

Woodward doesn't agree with the Boise decision, but she says as mayor she would not defy it.

"We do need to have bed space in order to enforce the laws," Woodward says. 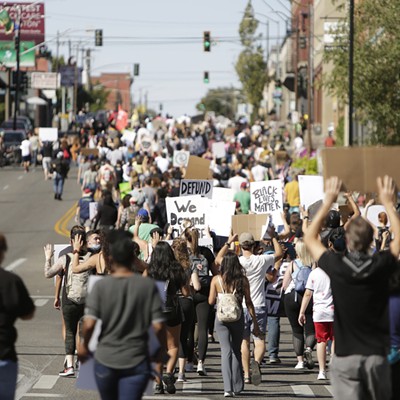