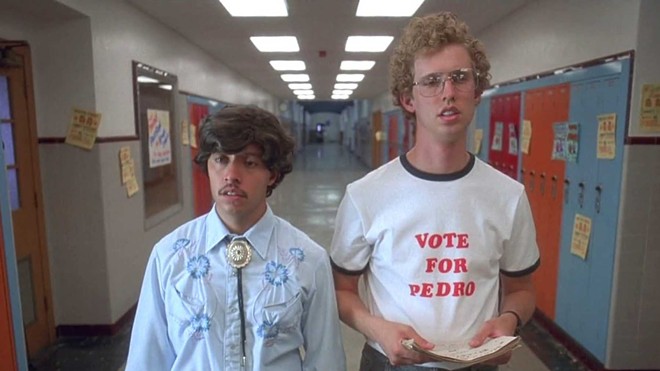 Efren Ramirez and Jon Heder will appear in Spokane on Nov. 12 with their cult film Napoleon Dynamite.

It feels almost surreal to be posting live event announcements in the midst of this lockdown, but maybe the prospect of a future gathering will help us through such strange times. And we've got exciting news for anyone who bought a "Vote for Pedro" shirt from a Hot Topic 15 years ago and has incorporated "your mom goes to college" into their daily lexicon.

The 2004 cult comedy Napoleon Dynamite will screen at the Fox Theater on Nov. 12, followed by an on-stage discussion with actors Jon Heder (Napoleon himself), Efren Ramirez (Pedro) and Jon Gries (Uncle Rico). Filmed in and around the small town of Preston, Idaho, on a budget of $400,000, Napoleon Dynamite became a genuine word-of-mouth cult sensation, playing in theaters for weeks on end and grossing nearly $45 million in its initial run.

Heder was also in talks to appear at this summer's Lilac City Comicon; no word yet if the event will be pushed back from its scheduled June dates.

Tickets for the upcoming event range from $35-$55, with $150 VIP meet-and-greet passes also available. They go on sale this Friday at noon at foxtheaterspokane.org and over the phone at 624-1200.

Additionally, the Ronnie Milsap concert that was originally scheduled at the Fox for March 24 has been moved to Sept. 28. Get tickets here.

The Flaming Lips reschedule their Fox Theater show for March 19, 2021

Spokane Symphony cancels the remainder of its 2019-20 season

Comedian Kevin James is heading to Spokane May 21