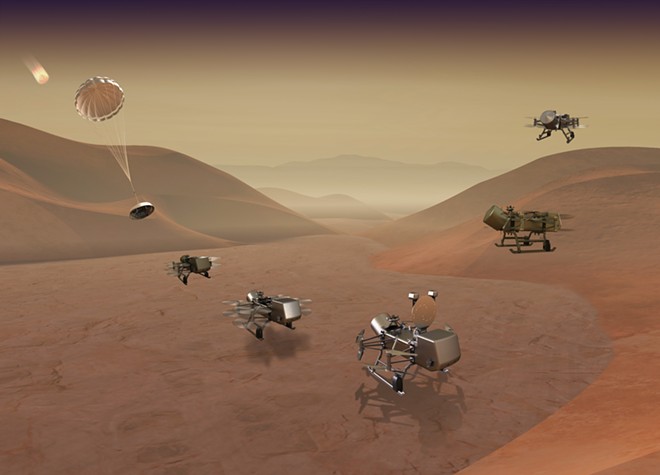 A University of Idaho researcher's mission to explore Titan — one of Saturn's moons — with a robotic spacecraft has been selected by NASA for launch.

In a news release today, the University of Idaho announced NASA selected the mission, known as Dragonfly, and funded it for up to $850 million. Jason Barnes, a founding member and deputy principal investigator of the Dragonfly project, is pleased with the announcement. "NASA's missions of planetary exploration are one of the coolest things that we humans do as a species," Barnes says in a statement. "To have our idea be selected to actually fly is what every planetary scientist dreams about."

The Inlander featured Barnes' research of Titan in our May Scholastic Fantastic Issue, which highlights research from local universities. At the time, Barnes was eagerly awaiting the announcement about whether Dragonfly would be funded or not.

Titan has an Earth-like hydrologic process, meaning there are clouds, rain and liquid on the surface. But it's not from water — it's actually methane that functions like water does on Earth due to Titan's frigid temperatures.

Titan has organic compounds in its atmosphere, and there is water ice underneath the surface that may ooze out much like a volcano would. That leaves open the possibility that there is water-based life on Titan that possibly formed in a similar way it formed on Earth. Or else, it's also possible that liquid methane can serve the same role as water in the life-forming process.

Dragonfly should be able to measure the progression to determine if life is beginning to form and, if so, how far along it is.

Dragonfly earned its name because the robotic aircraft looks a little bit like an insect. The mission involves 35 scientists from around the world and is led by the Johns Hopkins Applied Physics Laboratory. It beat 11 other teams to win NASA's New Frontiers Program competition, according to the news release.

Dragonfly has a launch date of 2025 and would arrive at Titan in 2034. It is a dual-quadcopter that will be able to fly around the moon to analyze the crust, hydrocarbon sands and the atmosphere. It will also be able to take meteorological measurements, pictures and track any seismic activity.

"Dragonfly will determine just how far Titan's organics have come on the path toward life. And, if some primitive form of molecular life has been able to form under Titan conditions, then we think that we can discover it by the end of our mission in 2037."