This one goes down just a few yards short of touchdown. 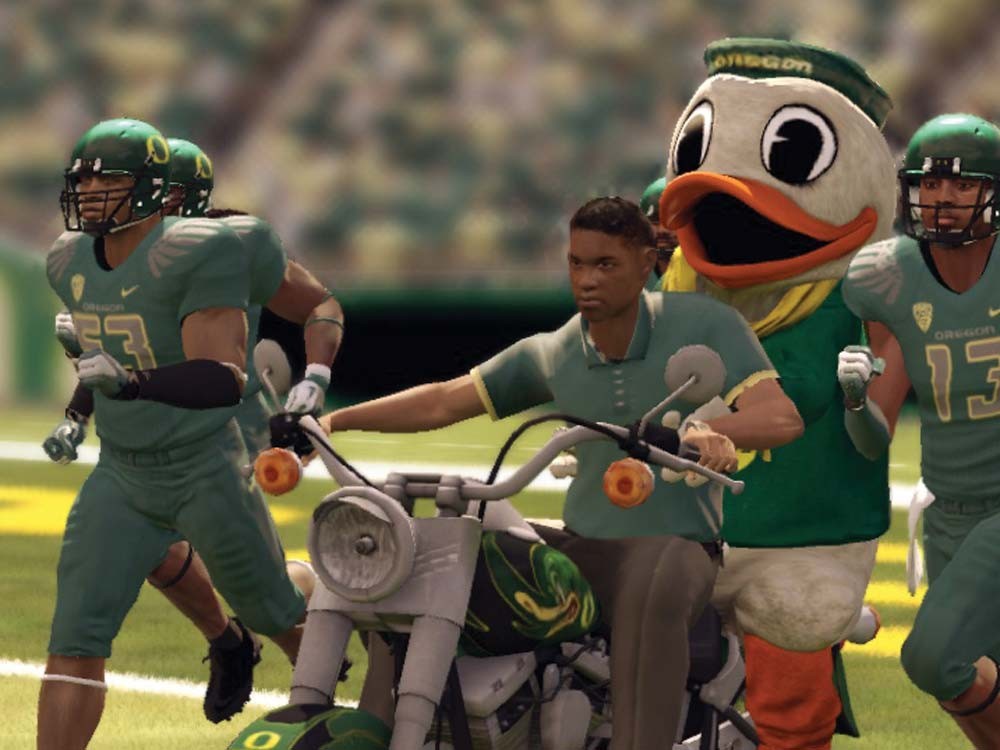 Nothing says college football like men in giant animal suits.

I am offense. With one eye making sure a burly linebacker doesn’t break towards me, I focus my attention on the gridiron like a grandmaster evaluating a game of chess. I watch my teammates rush across the field in the pattern we agreed upon, making sure they arrive at their destinations and travel their intended paths. A pair of padded shoulders from the opposing team can set one of my men back. Or a pack of the other team’s players might close in on the ball just when it reaches its target. I’m always trying to anticipate the flow, guessing where the players will be arranged in the few seconds it takes me to throw the ball.

Unlike a chess player, I have no time for drawn-out deliberation. Playing offense requires near-instant action. Fortunately, a videogame controller is well equipped for that. Those buttons that rest under my right thumb are snap decision-making tools par excellence. Each receiving player is mapped to one of the buttons, and its symbol moves across the field with him. When I want to throw, I merely press the corresponding symbol. The players become buttons, and my thumb makes the throw with a tap.

But I am also defense. My eyes retain contact with the football at all times. That lightweight, pointed oval can spin through the air like a bullet, and it can only be countered by my team of solid, slow bodies. Wherever the football flies, my bulky, padded men must fly, too, moving to intersect with it or collide with whoever else does. It’s about moving people, and no matter how well I anticipate my opponent’s actions, my response is always a little bit slower — guiding players across the ground while the ball sails through the air.

Instead of the on-and-off decision making of a button, defense requires a persistent force of direction. I need to push my men against and through the opponents, driving them relentlessly towards the ball. So I swerve and bear down on the controller’s clunky rubber thumbsticks in whatever direction I want my players to move. And they respond with appropriately clunky maneuvers, pressing and driving in the direction I choose, in the real world, to press and drive them.

THE GOOD: The only thing that NCAA Football 12 lacks is a basic football tutorial. Otherwise it has everything needed to play college football any way anybody could want. Teams composed entirely of mascots? Got it. Role-playing a player from high school to the precipice of the pros? Check. A deep coaching system? Yep. Online leagues? Uh-huh. A wide range of difficulty so that even people who don’t know anything about football can figure it out? Yeah, OK, it’s got that too.

THE BAD: The controls for throwing, running, tackling and coaching are perfectly implemented. So why can’t the designers figure out kicking? Pulling a thumb stick back and then snapping it forward while watching a meter on the screen feels nothing like kicking. It needs something that measures power and poise instead of simple timing.