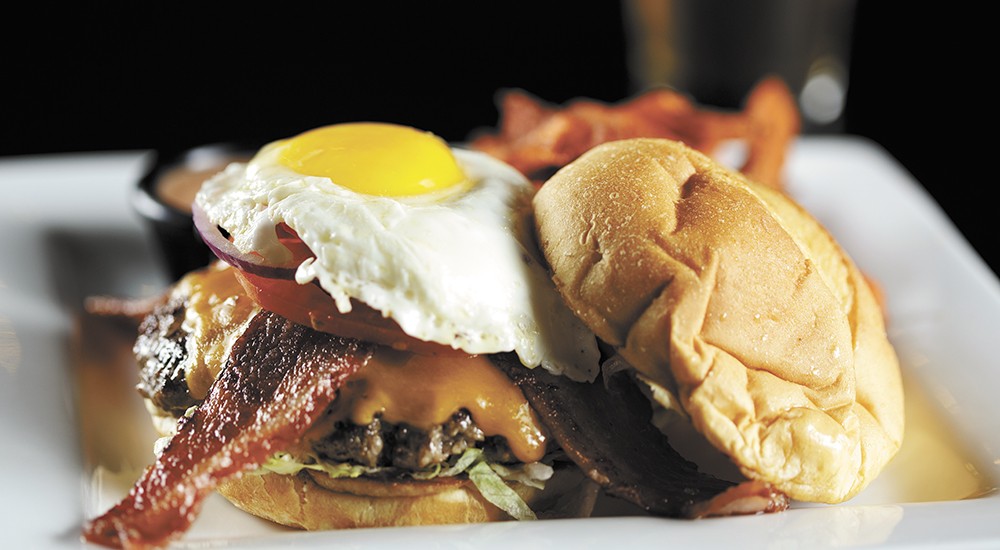 Young Kwak
A Royal Burger from 24 Taps Burgers and Brews.

Last August, 24 Taps opened just in time for football season. That season might not have ended well for the Seahawks, but this sports bar is making out just fine. They recently added an expansive array of burgers.

The truck, parked on a gravel lot next to Lloyd's Tire and Automotive on Government Way in Coeur d'Alene, stands out with a splash of bright yellow and a blown-up photo of the Rapture Classic Bacon Cheeseburger; it and the BBQ Bliss form the foundation of the five-burger menu. Each burger ($6-$10) is fresh-ground and hand-formed Angus chuck, cooked to your choice of rare, medium or well.

Last summer, restaurant veterans and owners Tommy Dageford and Richard Curtis opened Baxters on Cedar with high standards. The turkey in the soup with rosemary and wild rice ($4.50/$6) or in the artisan-bread sandwich with cranberry, sweet onion and extra-sharp white cheddar ($8.50) is roasted in-house. All "sammies" and salads are under $10.

Brandi Elder and John Gardner opened the BIJA Organic Juicery and Kombucha Bar in early April as a sister business to their already established mobile juice bar BEET It Up. They offer $6-$7 organic juices and smoothies as well as Kombucha, a tea-based drink that is cultured and brewed for up to two weeks, then infused with other flavors, for $3.25-$4.25.

Everything at Chomper Cafe, located in a remodeled farmhouse, is under $12. One of owner Sarah Baker's favorite things to recommend on the menu is the corned beef. It's slow-braised in-house for 12 hours, and you can get it on the Reuben ($9) or the corned beef hash ($11) served with potatoes, onions, two eggs and toast. Don't miss the pies or pastries, either.

Dueling Irons, which opened in late November, is best described as a twist on classic comfort food. The house-roasted turkey is covered with melted Swiss cheese and avocado on focaccia bread with cranberry spread ($9.75). And the slow-braised pork is featured in a sandwich ($8.50) and breakfast burrito ($9.25).

Sonia Schumacher, the cafe's owner, owned and managed Sushi Yama in Airway Heights, but always wanted to have her own cafe with healthy food, juice and coffee. The menu offers a mixture of Korean and American items, so you can get a chicken salad sandwich ($6.95), a Korean rice bowl ($6.95) or a BLT tortilla wrap ($6.95).

Ezell's, which opened on the South Hill on April 15, is the 11th outlet of a Seattle-based chain started by Lewis Rudd 31 years ago. Besides the famous fried chicken, there's potato salad, cole slaw, mashed potatoes, corn and fried okra.

Guice offers both smoothies and fresh-pressed vegetable and fruit juice blends. All of the products are organic and dairy-free. Instead of milk or yogurt, they use rice, coconut and almond milk. Guice offers 8 oz. kid-sized drinks ($4), but otherwise all beverages are 16 oz., ranging in price from $6.50 to $7.

Owner and chef Kingsley Chen came from his uncle's restaurant in Portland to create fresh, delicious and reasonably priced meals in Spokane. Most of the dinner meals are under $13, and lunches are $7.95 and $5.95. The $7.95 lunch special includes soup, spring roll, pork fried rice, fried wonton and a choice of two entrées. Dinner portions are huge, and even big eaters will have enough leftovers for a hearty lunch the next day.

Holeshot is a combination of two key ingredients: motocross and no-nonsense, thin-crust pies. Customers can expect food hot and quick. Four or five varieties of pizza are available, with whole pies all coming in at 16 inches in diameter. Or you can buy a slice.

You can take in the Ivory Table's menu at an eye's glance — seven hot sandwiches and three cold sandwiches. In June 2014, Kristen Ward opened up the minimalist lunch café and catering company. Sweet and savory crêpes, as well as hash and eggs, are available before 11 am on weekdays and all day on weekends — all for $12 or less.

Sean Campbell and his fiancee, Ana Silva, wanted to do something together after spending nine months a year in a long-distance relationship. Naturally, they opened a food truck. As the name suggests, burritos ($8) are their specialty. The 14-inch tortillas enveloping your choice of rice, beans, meat, cheese, guacamole, sour cream, onions, cilantro and pico de gallo make for a monstrous meal.

Each hot dog in this island-themed restaurant is just $3.50, has a sauce, mustard and relish — all homemade. There are combos like lemon garlic sauce, pineapple relish and guava mustard on the Maui Dog, or mango relish and wasabi mustard with the lemon garlic sauce for the Big Island Dog.

Rarely does one feel such power when ordering a pizza. Dozens of toppings — sauces, cheeses, veggies, herbs, meats — are laid out behind the glass, so you can point at will and choose what you want. The best part? You're charged the same no matter how much you pile on. The South Hill MOD, which opened in late April, was the first Eastern Washington location of the Seattle-based nationwide chain; one is coming to downtown and the Coeur d'Alene location opens this month.

Neighborhood Pub's beer list, with more than 100 choices, is six levels of epic adventure called the Beer Club. Drink 50 beers and pass level one, winning a beer-can-shaped glass emblazoned with the pub's logo; 500 beers later, and you'll achieve "Bill Murray" awesomeness. Fuel up along the way for no more than $12 an item.

Porch Light Pizza, which opened in late April, prides itself on fast, wood-fired pizza, which they readily accomplish. Thinner-crusted pizza means you're not going to be waiting there forever while it cooks, and a variety of toppings results in options. For $8, you can amply feed yourself (or you and a friend) with a dinner-plate-sized specialty pizza.

Tierra Madre Cafe & Juicery is exactly the kind of place you'd expect outside of a yoga studio run by a longtime Sandpoint chef and former owner of a health-oriented restaurant: good food and good vibes in equal measure. On the menu are vegan and vegetarian items like smoothies and juices ($7), wraps, salads, sandwiches, teas and a smattering of desserts, including raw and gluten-free, like the pumpkin pie ($5) with whipped cashew milk cream.

LeRoy Payne used to be on the barbecue competition circuit, but decided to settle down and open Uncle LeRoy's last August in a house-like structure on South Pines Road in Spokane Valley. Out back, there's plenty of room for him to teach his monthly barbecue class and do all his barbecuing outside, on a smoker that can cook 50 slabs of ribs at a time. Most items are under $12, platters and extras notwithstanding.

Seeing a need for a Coeur d'Alene juice bar amid a growing health scene, North Idaho Wellness publisher Monica Engebretsen opened the Wellness Bar last July in a section of Fourth Street she calls "the wellness nook." You can get something to munch on like wraps, salads, sandwiches, hot soup and Protein Pucks, and they serve organic coffee and Tao organic tea.

Last August, Pacific Avenue Pizza owner Darin Talotti decided he wanted to run a laid-back downtown bar, so he created Whisk — and placed it inside Merlyn's former storage room. They make the pizzas across the street at the Red Lion. The full pizza menu features more than a dozen varieties, some also found at Pacific Ave, and some not. ♦

Recommendations, recipes and other advice from your favorite Inlander writers