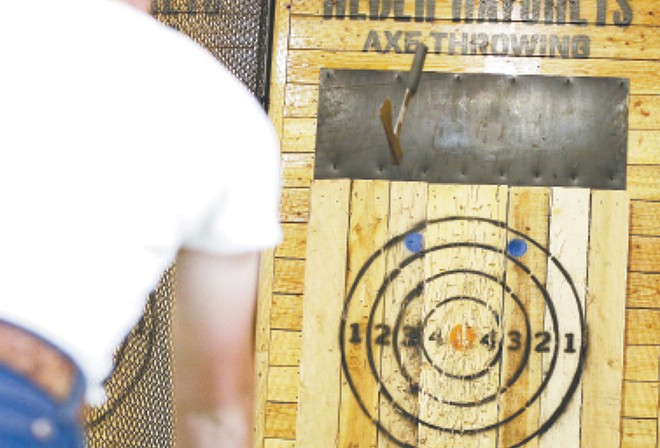 Young Kwak
Axe throwing is like playing darts, but with really sharp hatchets.

Forget bowling, darts and pool — axe throwing is the new pastime that is taking over the country, and it's the newest thing to do in the Inland Northwest.

Currently there are two locations: Heber Hatchets Axe Throwing on North Division in Spokane, and Axe Force One, located in the Silver Lake Mall in Coeur d'Alene.

"People are always looking for something to do with friends and things like bowling and darts have been around for a long time and this is something new," says Doug Duncan, manager of Axe Force One. "It's really fun, it's really not that difficult to learn. People can come and pick it up relatively quickly and enjoy a nice time of competition with their friends."

"I used to throw hatchets when I was in scouts and I always had a good time. So, I decided to take my wife and friend down here because it seemed fun and it was a relatively cheap experience. It's a great stress reliever," says Kendall Parrett, a customer at Heber Hatchets.

For Dave Kelley, Heber Hatchets' manager, axe throwing has been in his life for about 15 years.

"It started out when we were bored camping and we started throwing hatchets at a dead tree, and then it got competitive. That's how my interest in hatchets started. Then this job came around, it was a perfect match," Kelley says.

Another customer at Heber Hatchets, Jonathan Graham, says he used to throw hatchets with his grandfather and absolutely loves having a location to partake in the activity within Spokane.

Axe Force One, which opened in March, was created when Duncan went axe throwing on the East Coast. He had so much fun and wanted to continue the sport when he got home. However, there were no axe throwing facilities in the area.

"It brings the outdoorsy activity into the city. In Spokane you can go outside [the city] and there's a lot of outdoor activities. It's nice to finally have an activity like this inside the city," Parrett says. "And it's different, it's not your regular bowling or laser tag or rock climbing."

Both managers wanted to share their love for the sport and the fun that comes from it with the people of the region.

"It's fun to do. I think it caught people off guard because maybe they thought throwing an axe was something they never thought they could do, but they can," Kelley says. "We train them, we teach them and generally everyone who comes in here walks out successful."

The rules are straightforward, Duncan says. A person enters the throwing zone with a coach where they learn how to throw. Each participant will work with this coach until the majority of the group can get the axe to stick to the target. After that, they can begin competing and playing games.

As a game, axe throwing is very similar to darts. Each ring on the target is worth a different number of points and wherever the axe sticks determines the points.

At Heber Hatchets there are posters all around the shop outlining the different games customers can play. Both shops are also hoping to start league play, similar to league bowling. They hope leagues will foster healthy competition among friends and build a community of old and new axe throwers.

Duncan says people may be tentative when they come in, but he and his team have ensured that safety is their paramount concern. It's the same at Heber Hatchets.

"You'll find people who are a little shy or trepidatious about this activity but then we get them some training and using proper technique and then they're doing it and they're amazed. You see it click in their mind and just love it," Kelley says.

I can attest to this. As a 5-foot-3-inch, 20-year-old, unathletic female I did not expect to find even a sliver of success at axe throwing. Yet, I did after six or seven tries. I stuck the axe to the target, and I can confirm hearing the axe slice into the wood and stay there is insanely satisfying. And once I found that one success, it was difficult to stop throwing.

Heber Hatchets does not offer any in-house food or drink and alcohol is not allowed; however, customers can bring in their own food and nonalcoholic beverages. Axe Force One sells a few snacks, as well as water, while also allowing customers to bring in their own food and beverages. Axe Force One does allow people to bring their own beer or wine, but only when they book the officer's club for private parties.

Both shops in the area have seen success in the short time they have been open. Heber Hatchets hopes to expand in the coming years if the Spokane shop continues to do well.

"We're not trying to be medieval warriors or backyard survivalists or anything like that, we just want to have fun," Kelley says. ♦


Where to Throw Down