Fresh leadership for a local teachers union; plus, a lawsuit over charity-care investments

By Wilson Criscione and Samantha Wohlfeil 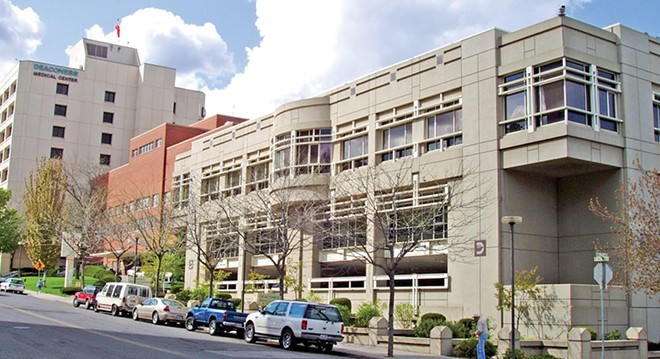 After eight years leading the SPOKANE EDUCATION ASSOCIATION teachers union, Jenny Rose has been ousted as SEA president. Katy Henry, previously the SEA's recording secretary, overwhelmingly beat Rose with 74 percent of the vote to take over as president, according to certified results provided by the SEA. Henry's term starts June 15.

"My focus is on a broader engagement of members," Henry tells the Inlander. "I want to bring more of a focus on connecting with the community."

Rose was SEA president during two contract negotiations with Spokane Public Schools, including a one-year contract that came after a threatened strike to start the 2015-16 school year.

Henry says she's not looking to go in a much different direction than Rose. In recent years, the union has worked with Spokane Public Schools on providing resources for teachers who are expected to use "restorative practices" when disciplining kids, a strategy that focuses on addressing root causes of misbehavior instead of kicking students out of school. Some teachers have objected to the changes, feeling that they don't get enough help to maintain an orderly classroom. But Henry says she hadn't heard of any specific complaints about the way SEA has represented teachers, calling it an ongoing conversation.

"I hope we have more of what we need in schools," Henry says. (WILSON CRISCIONE)

Empire Health Foundation is suing the for-profit company that bought DEACONESS and VALLEY hospitals along with the Rockwood Clinic in 2008, claiming that the company has shorted the community on charity care by at least $55 million.

When the sale was closed and Empire Health Foundation was formed, the foundation filled the shoes of the seller and is able to enforce the agreement, explains Ele Hamburger, an attorney representing Empire Health.

When the state Department of Health gave CHS permission to do business as a hospital, part of that was contingent on CHS making reasonable efforts to meet or exceed regional levels of charity care, Hamburger says. But the foundation claims that according to publicly reported data, the two hospitals provide less charity care than other Eastern Washington hospitals, on average.

From 2009 to 2015, the costs used to calculate charity care went up 14.7 percent each year at Valley Hospital and 9.4 percent at Deaconess, compared to an average of 6.1 percent per year at other Eastern Washington hospitals. Taking that into account, the difference in charity care could actually be as high as $110 million, the complaint alleges.

"This artificially increased the prices for care they delivered," says Antony Chiang, president of Empire Health Foundation. "It's like if you donated 10 cars each year to charity, and they were each worth $1,000, and if you said over time those same cars are worth $2,000. So you now only have to donate five cars to make it look like you're still donating $10,000."

CHS says the hospitals "have fulfilled all of the obligations outlined in the purchase agreement" and met the requirements of the state Department of Health. (SAMANTHA WOHLFEIL)