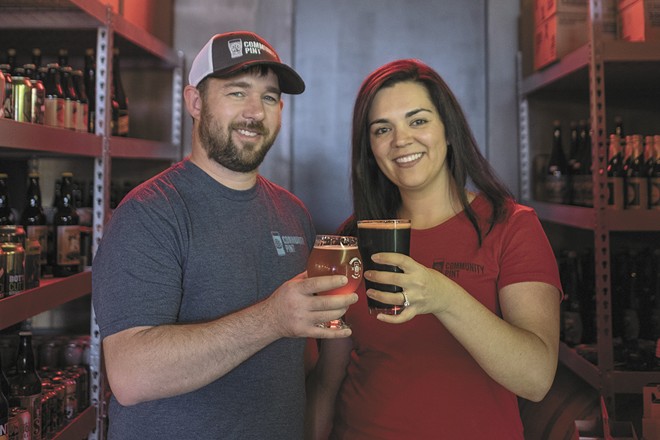 he Garland District is soon getting its first neighborhood brewery.

The couple behind Community Pint beer bar, TJ and Sarah Wallin, are currently building out the home of the forthcoming Garland Brew Werks (603 W. Garland) in a building that last housed a sewing supply shop.

The brewpub is taking half the building, while the rest is becoming the new home of Giant Nerd Books. TJ Wallin says the first stage of Garland Brew Werks will be as the temporary housing of Community Pint this spring and summer while extensive road construction takes place on East Sprague, where the beer bar has operated since 2017. The beer bar is currently open inside at 25 percent and for to-go.

"The road is going to completely close, and so we'll temporarily close Community Pint" and move it to Garland, he says. "The situation just made sense when we found out about the road construction."

He anticipates the brewery to be up and running before the end of the year. He plans to produce all sorts of brews on the five-barrel system, from traditional IPAs and lagers to other creative small-batch concoctions. The brewery will also serve food so it can operate as an all-ages venue.

"An all-ages bar is something Garland lacks, and we want to bring that to the area — a family-friendly atmosphere — since everything else around is kind of nightlifey," Wallin says. "My dream was always to be in a neighborhood, to be a neighborhood brewery." ♦

The original print version of this article was headlined "Tables Waiting"