CdA's new MoMo focuses on the details with menu of select sushi, wok-cooked and grilled items 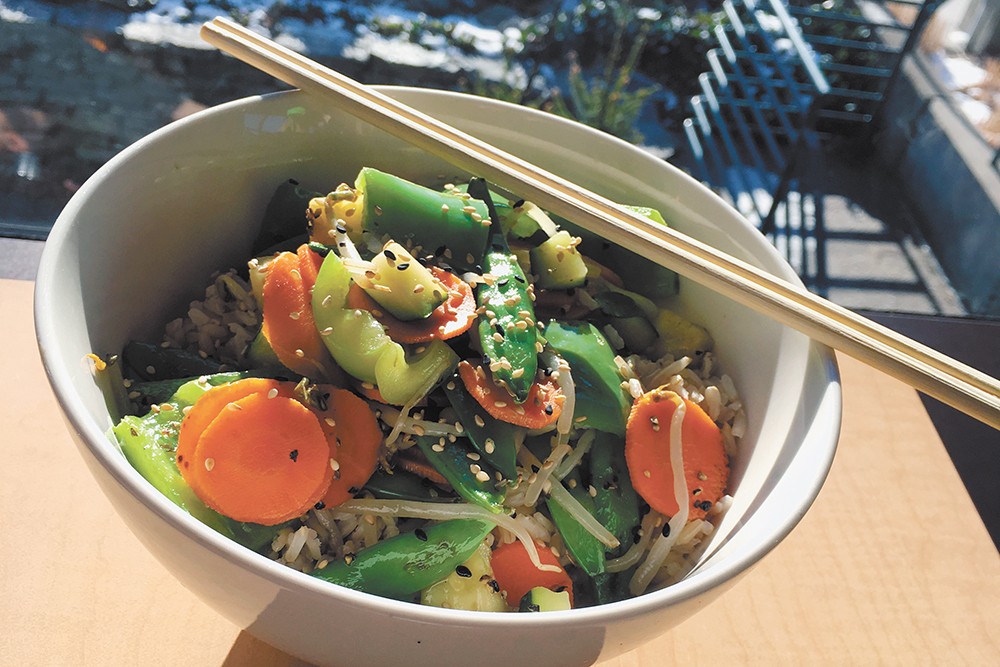 Housed in the former home of Bonsai Bistro,

MoMo Sushi.Wok.Grill is the largest restaurant space Grace and Scott McNiel have ever run, at 10,000 square feet and three levels. Yet with Grace's background in business and Scott's in computer engineering, the McNiels' focus on small, specific details are what matter.

Sushi, explains Grace, is a slower process, and more focused on presentation, while wok-cooked food is much, much faster.

Wok-executed food can't be prepared ahead of time and simply reheated, she says. "It has to be fresh."

In lieu of the type of sushi bar some diners might expect, MoMo prepares its two dozen sushi rolls in the kitchen, like the popular spider roll with soft-shell crab ($12) and North Idaho Roll with shrimp tempura ($12).

The menu is purposely small, says Grace. There's one page each of sushi and wok items, and one page of soup, salad, noodle dishes and appetizers, like chicken lettuce wraps ($12) and salt 'n' pepper calamari ($14).

Grace's older brother Hyun Son runs the kitchen, having relocated to Coeur d'Alene with the McNiels in 2014.

"He's the guy with the gift," says Grace of her brother, who notes that the restaurant's food is all scratch made and rooted in her family's Japanese and Korean heritage.

Korean bi bim bap, for example, is a spicy dish with marinated beef, vegetables and fried egg over a bowl of rice ($16), while shrimp tempura udon features enoki and shiitake mushrooms, and kamaboko, a traditional Japanese fish paste over thick noodles. The menu also includes a smattering of pan-Asian dishes such as Thai coconut curry ($16-$17) and Chinese-style ginger broccoli beef ($14).

MoMo Coeur d'Alene follows the sushi, wok-cooked and grilled food format of the family's two other restaurants, explains Grace, who was attending Seattle Pacific University when she and Scott met. When she left for Colorado, where her parents had purchased a small sushi restaurant, Scott followed her. MoMo (which translates from Japanese to peaches) opened in Canon City, Colorado, in 2007, followed by Tsunami, in Pueblo, Colorado, in 2013.

The couple and their children are excited about their new downtown Coeur d'Alene location, with its unusual lower-level dining area, and are also looking forward to summer, says Grace. In the meantime they keep looking for ways to create the optimal dining experience for their guests. ♦