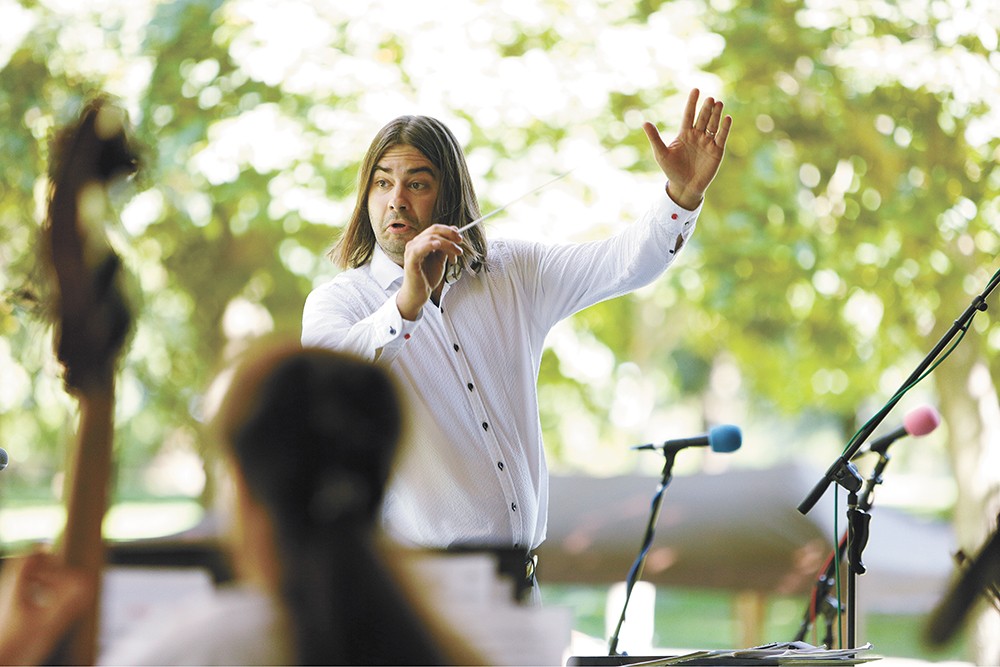 Coeur d'Alene has a symphony?

"Coeur d'Alene Symphony was the biggest secret in Coeur d'Alene," says Faulkner, an avid supporter of the visual and performing arts, longtime Coeur d'Alene resident, and recently named executive director of the organization after working in an advisory role for the past several months.

Faulkner's use of the past tense is no mistake.

The symphony started as a class 41 years ago at what was then called North Idaho Junior College, so one of the first orders of business, Faulkner says, has been ensuring musicians are paid (the executive director's role is unpaid, for now, at least).

She's also actively recruiting help — from volunteers to board members to sponsors. And she's always looking for fundraising opportunities, like the most recent one that started as a bit of a lark when Faulkner saw a Facebook post from Garrison Keillor, founder and host of popular radio show A Prairie Home Companion for more than 40 years. Keillor was looking to donate his time in a series of nostalgia tour performances to worthy organizations. Faulkner's letter to the Grammy Award-winning author secured a spot on Keillor's nationwide tour, the proceeds of which benefited the symphony.

In addition to raising funds, the overall plan is to expand the symphony's visibility, building on past programs like Saturdays With the Symphony, a small, 30-minute free concert it provides to audiences at both Kootenai Hospital and the Coeur d'Alene Library.

More collaborations, such as with ChoraleCDA and Inland Northwest Opera, are planned, as is more community outreach, extending north to Sandpoint and south to Worley, where it hopes to work with the Coeur d'Alene Tribe. It also wants to extend its reach into area schools and other organizations.

"My job now is to market the symphony," says Faulkner, who has done just that for numerous other local organizations: Jacklin Arts and Cultural Center, Morning Star Boys Ranch and Inland Northwest Opera, which she helped found nearly 20 years ago (as Opera Plus and Opera CdA).

The symphony's not-so-secret weapon is conductor Jan Pellant, who recently led a downsized version of the symphony's 40-45 musicians through Handel, Copeland, Dvorak, and other composers for the symphony's annual, free Labor Day concert in Coeur d'Alene's City Park.

Faulkner met Pellant at last year's Labor Day concert. He had only been on the job a short while, having edged out four other candidates including Spokane's Jorge Luis Uzcategui and Danh Pham of Pullman.

Although he is fairly new to the Northwest, Pellant has spent a lifetime with music, surrounded by it from a very young age, including through his musician father. By age 5, he was playing the violin, then added the viola eight years later.

Although he has little time to play for himself, he says the experience playing was invaluable. "A conductor should know basically something about every instrument," says Pellant.

As a young man, he studied at the Prague Academy of the Performing Arts in his native Czech Republic, and holds degrees from the Prague Conservatory and Carnegie Mellon University.

His conducting experience has taken him all over the world: China, Thailand, France, Japan, Czechoslovakia, Romania, and throughout the United States, including guest stints at the Pittsburgh Bethel Park Orchestra and several organizations in Kentucky, where he served as founding music director of the Lexington Chamber Orchestra.

As a student of the University of Kentucky's Doctor of Musical Arts program, Pellant also found himself in the role of teacher.

"I learned to have a long-term goal, and to be moving slowly — not too fast — to make sure the orchestra is part of the community," says Pellant, who is as excited as Faulkner about collaborating with other organizations.

One of those partnerships is with North Idaho College, where the symphony will return for the 2019-20 season and where this past year Pellant led five Young Conductor's Workshops.

It's part of making conducting and orchestral music more accessible and more relevant, says Pellant. So, in addition to classical composers — Mozart, Bach, Brahms, his beloved Dvorak — the symphony pulls from George Gershwin, Aaron Copland and music more recognizable to modern audiences, including from movies and pop culture.

Another goal, says Pellant, is to make the orchestra sound like a compact body. "Every orchestra has a unique sound," he says. How does the Coeur d'Alene Symphony sound?

"They play with a lot of passion and energy," says Pellant.

He might as well be describing himself. As he conducts, his hands and baton are constantly in motion. He sways, steps and occasionally leaps into the air, his longish hair flying and his customary suit jacket or formal dinner jacket tails flapping about.

"The combination of Jan and [musicians] being paid changed the dynamics of the symphony," says Faulkner, whose favorite composers include Mozart, Rossini, Puccini, all of the bel canto operas. She pauses. "The Beatles, Sinatra, Pasty Montana," she adds. "Celtic. Big band."

"I've just always been involved in music," says Faulkner, who remembers learning to play piano as a young girl at the Immaculate Heart Academy (now Sorensen Magnet School of the Arts & Humanities), and played the snare drum and bass fiddle as a Coeur d'Alene high schooler.

"In the tapestry of a community, music is the color." ♦

The Coeur d’Alene Symphony season begins Oct. 4-5 with shows at the Kroc Center, and Saturdays with the symphony offer free opportunities to hear the orchestra this fall on Oct. 27. On Dec. 6-7, it will host A Festive Celebration at the Kroc Center. Visit cdasymphony.org for more information.