Seattle's Tacocat steps up its game 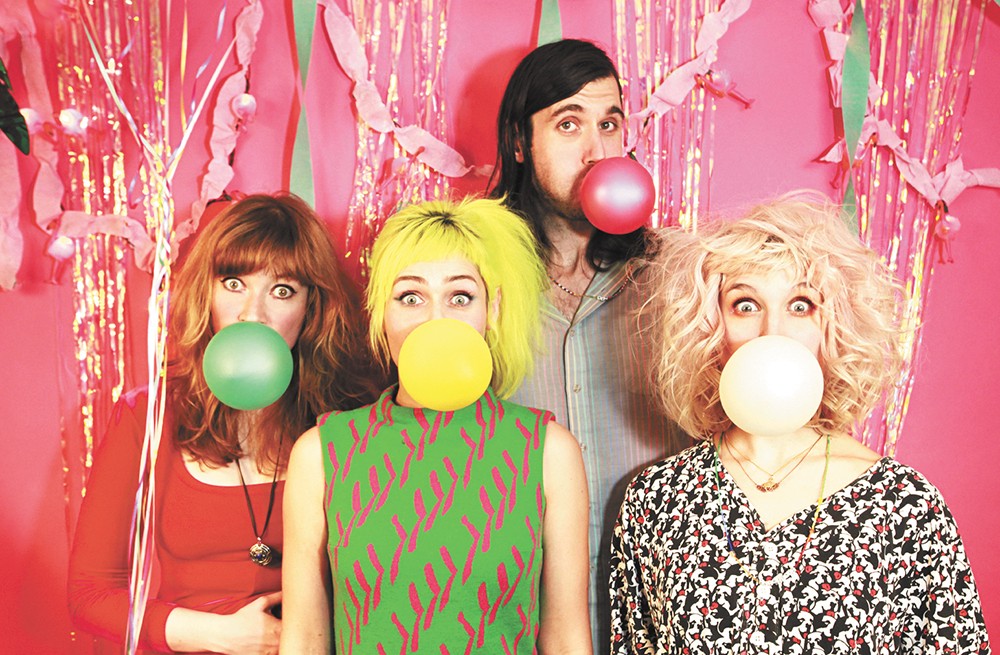 The Seattle pop-punk quartet has been a thing for eight years, all the while squeezing into practice spaces, writing songs and making long drives between tour stops together.

Even when they're not being a band, they're buds — they hang out, goof off, have fun. Bassist Bree McKenna, drummer Lelah Maupin and guitarist Eric Randall actually live together in a place affectionately known as the Spruce House. (Tacocat's fourth member is vocalist Emily Nokes.)

Which is why it's no surprise that a conversation with McKenna and Maupin takes many twists and turns, with one starting a thought and the other finishing it — and vice versa — with startling regularity.

"When you get a new crop of songs, you can't wait to play 'em live," says Maupin. "And then you play them, like, a hundred times and you're like, 'OK, anything else.'"

Here, McKenna jumps in: "And then you're like, 'I want to play a new crop and I want my new crop to be a different kind of fruit!'"

To be fair, Tacocat has always been a different kind of fruit. When the band started, it was an anomaly on the Seattle scene: a lady-powered band that played bouncy pop songs with punk-rock 'tude. Now, Tacocat is part of a wave of talented and like-minded bands (regardless of genre), including Chastity Belt, La Luz, THEESatisfaction, Childbirth and more that are on their way up.

"When we started, there weren't a lot of women, and everyone basically thought pop-punk was horrible and dead and stupid," Maupin says with a laugh. "But it's not. It's awesome."

Indeed, Tacocat's most recent full-length album — 2014's NVM — is an unabashed good time. Its 13 tracks bop by in under a half-hour, a candy-colored blur of indie-pop and cuddly punk, yes, but also surf-rock, girl-group harmonies, perfectly buzzy guitars, cascading cymbal crashes and lyrics about skeevy dudes, shitty public transit and menstruation. (If you've not heard "Crimson Wave," do so today. It must be the catchiest and cleverest tune ever penned about periods.)

The world took note of NVM, whose name is a 21st century update of Nirvana's breakthrough album. SPIN magazine called it one of 2014's most overlooked albums. Legendary rock critic Greil Marcus ranked it as his favorite album of the year in The Believer. In March 2014, NVM reached the Top 10 of CMJ magazine's college radio chart.

All of which brings us to where Tacocat is today: "Trying to force our band into being a lucrative small business," McKenna says. The quartet is ramping up to a spring release of their new record, which has no title or release date yet, at least publicly, but McKenna and Maupin are stoked to talk about it nonetheless.

"We're really, really excited," McKenna says. "I think we all can agree it's the best thing we've artistically done."

The new album was produced by Erik Blood, a Seattle musician and producer best known for his work with hip-hop acts like Shabazz Palaces and the aforementioned THEESatisfaction. Blood's established aesthetic tends to be duskier and more brooding than Tacocat's previous work.

"Almost everything qualifies as darker than NVM," McKenna says. "It's very sunny, which we love. We all have a really strong sense of humor and we love silly songs and stuff. We were just trying to do something a little bit different. I guess the goal was to just keep progressing."

Says Maupin: "It happened really naturally, and when we heard the final produce, we were like, 'Wow, we really changed!' But it still sounds like us. I think we just wanted to challenge ourselves. We don't need to make NVM again."

After digging deeper, it seems like Tacocat is growing up a bit. McKenna and Maupin talk about the band's shifting perspective on songwriting; the quartet is spending more time examining great songs, dissecting their structures, paying attention to chord progressions and how lyrics work. Maupin and Randall worked hard to learn Taylor Swift songs for a Taylor Swift cover band, and Maupin is convinced that doing so expanded her skills and inclinations behind the drum kit.

It's all coming together: A desire to do something different musically. The decision to work with Blood. A push to turn a part-time band into a full-time career. Good tires on the van heading into a winter tour of the vast, mountainous West (with a first stop in Spokane). Add it all up, and you find yourself at an exciting and maybe a little bit scary point in Tacocat's arc.

"It's almost like writing your college thesis," McKenna says. "It's like, 'OK, I've learned all this stuff and I've got all this information, and now I'm going to spit it back out at you." ♦