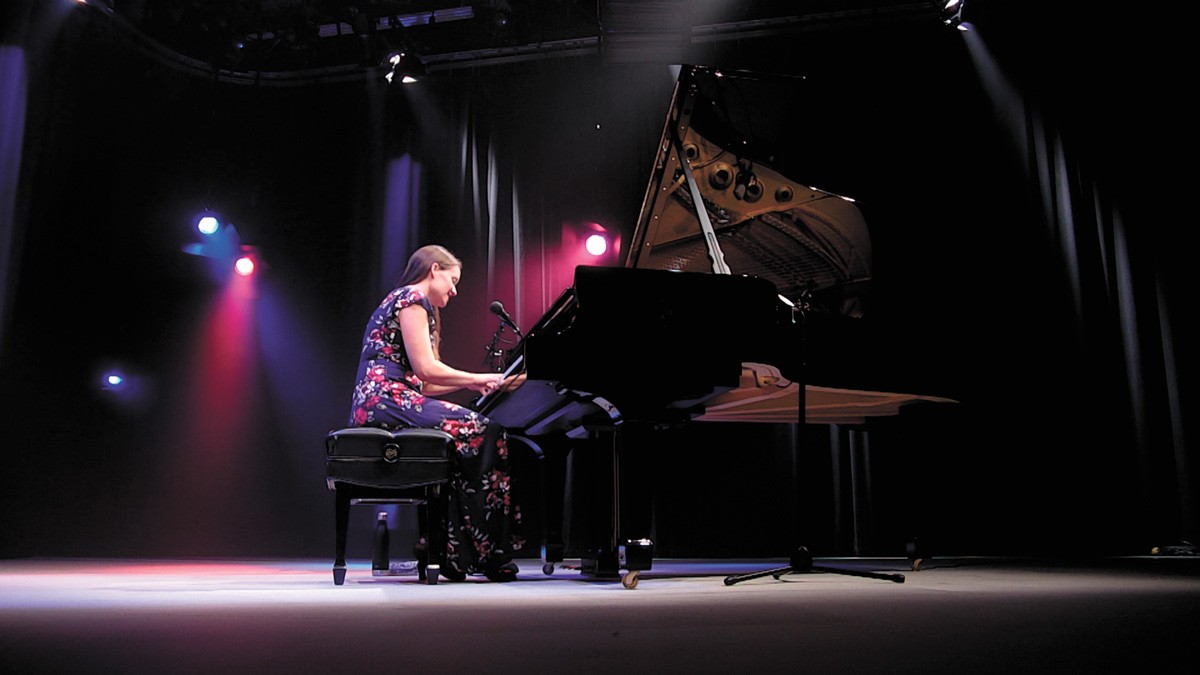 Liz Rognes enjoying a rare chance to perform thanks to Inland Sessions.

As Washington heads into its ninth month of bans on live entertainment, musicians have had to find some workarounds. Livestreams and online concerts have become the norm for artists and audiences since spring, and a new series on the local public television station KSPS is adding to the ever-growing catalog of live local music that you can experience from your living room.

Inland Sessions was designed as a showcase for local musical artists, and a standard episode features live in-studio performances and interjections from the performers, talking about their backgrounds and telling stories in between songs. The series has been airing Monday nights since early October and is essentially a Spokane version of MTV Unplugged.

"We were re-examining our role in the community and how to make public TV a more integral part of the community," says Jim Zimmer, Inland Sessions' executive producer. "We've done a lot of productions on visual artists, on craftspeople, on painters and sculptors. But musicians especially haven't really gotten very much attention from us, [and] we knew that they needed this exposure and the support."

KSPS has partnered with the nonprofit Spokane Arts to launch Inland Sessions, which not only led Zimmer and his fellow producers to artists but supplied them with a budget so that performers can be paid.

"This is an opportunity for us to support and encourage local artistic talent at a time when they are not able to perform in public," Zimmer says. "There's so much talent in this community, and unless you're going out to events, you really don't get a chance to be exposed to it."

The series has thus far been recorded in a large studio space so that social distancing measures could be put into place, and the crew has been limited to just a handful of people. Five half-hour episodes have aired, featuring the likes of blues guitarist Sammy Eubanks and folk-influenced singer-songwriters like Dario Ré and Karli Ingersoll, as well as a dual performance by violinist Mateusz Wolski and pianist Archie Chen.

The first Inland Sessions episode centered on the music of Nic Vigil, who is perhaps best known as the frontman of the popular Latin fusion band Milonga. Vigil performed by himself with just an accordion and an acoustic guitar, and in between he discussed his own musical journey, explaining why he gravitates toward genres and instruments he loves. When he left the studio after a three-hour recording session, Vigil admits that he had no idea what the finished product would look like.

"I ended up leaving and thinking, 'Man, I didn't do so good.' I just was thinking I'd probably bombed," he tells the Inlander. "But they did such a tremendous job of editing it, and I was really tickled when I saw it."

Liz Rognes, a singer-songwriter who also co-founded the program Girls Rock Lab, has also filmed an episode of Inland Sessions, and the production was the first time she had played for (albeit a small) group of people in ages.

"I was so excited when I got the email from them, because I hadn't had a chance to perform in months," Rognes says. "I felt really honored to be asked to participate. It seemed like a great way to get to perform a little bit, and a good reason to practice some songs that I hadn't really been getting to play."

Vigil, meanwhile, had had a bit more practice before his session, having played a handful of concerts over the summer in Idaho, where there are fewer restrictions on in-person gatherings. But even so, he says that there was something special about the exclusivity of the Inland Sessions roster, and he felt honored to be included.

"I was blown away that I got to be included with such great talent," Vigil says. "Once I started watching the series and saw Karli Ingersoll and Sammy Eubanks, and I was like, 'Holy shit, I'm on the same ticket as these cats.'"

Rognes hasn't seen her episode yet — it's scheduled to air Mon, Nov. 23 — but she has been watching the series for the last few weeks.

"I have two kids who are extremely excited about the idea that their mom is going to be on TV," Rognes says. "My six-year-old and I have been watching them pretty regularly on Monday night. So we do have a plan to watch it together."

It's still unclear when in-person performances will become a reality again, with some experts estimating that stages could remain empty deep into 2021. In the meantime, Rognes sees series like Inland Sessions as the next best thing to actual gigs, not only because they're pointing audiences in the direction of great art but because they can provide a platform for a diverse array of voices and styles.

"Right now, we are so isolated," Rognes says. "This is a time to be creating more opportunities like this, where we're able to see performers and learn about what they do. This is an important moment where we can look at where we ought to be thinking about how to support local artists and local venues and local arts organizations." ♦

To see past episodes of Inland Sessions, visit video.ksps.org/show/inland-sessions.

The original print version of this article was headlined "Live, Local and Televised"