Amid concerns over opioid dependency, meth makes a comeback 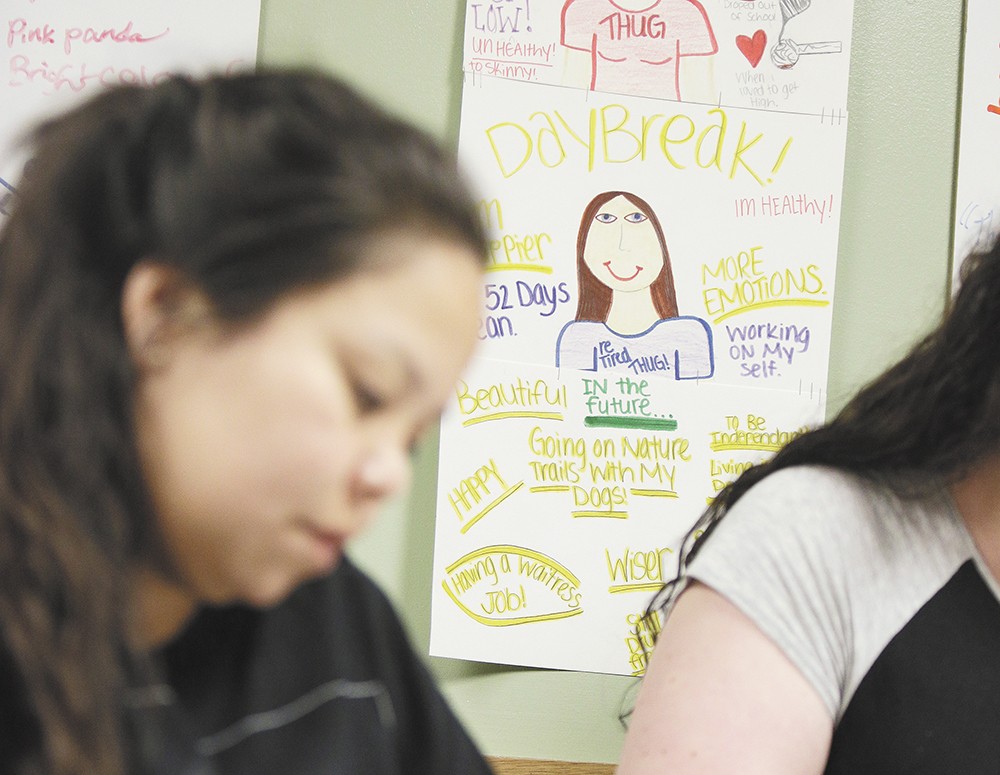 Young Kwak
Clients at Daybreak Youth Services concentrate on coloring. In the background is a poster warning of the dangers of meth.

In the basement at Daybreak Youth Services,

A friend introduced her to Adderall, a prescription drug commonly used to treat Attention Deficit Hyperactivity Disorder. From there, she turned to methamphetamine, a drug with a similar chemical structure and similar effects. Sometimes she would smoke meth. Other times she would roll up the tannish powder in toilet paper and swallow it.

"I could get it anywhere," she says of the availability of meth. "It's extremely easy for me [to get it], anyways."

One day, after taking a large amount of Adderall, she got into a bad fight with her mother over her drug use. Her mother put her under constant supervision for three weeks. Unable to access drugs, she says, the meth withdrawals kicked in. When she wasn't sleeping, she was cold and sweaty. "It was horrible," she recalls. "I had a psychotic breakdown." From there, a mental health worker referred her to Daybreak, where she takes classes, attends therapy and is working toward recovery.

The whole time, Ryklee didn't give an afterthought to where meth was produced. But there's been a shift in supply of meth, which has the potential to undo some of the past efforts to stamp out the drug.

Meth was once commonly cooked in labs built in houses or garages that were left toxic from the chemicals used to make the drug. In the 1990s and early 2000s, law enforcement and legislators turned their attention to the problem, putting the key ingredient out of reach for many would-be meth cookers, locking up traffickers and shuttering the labs that are now a rarity in states like Washington and Idaho. With meth's most visible footprint largely gone, public conversations have turned to heroin and opioid-based prescription drugs, which have seen a sharp rise in use in Washington and nationally.

But meth hasn't gone away. Mexican cartels, which can produce the drug cheaply and in great quantities, have stepped in to meet the demand. Numbers from public health and law enforcement agencies show that the use of the drug is on the rise. Locally, one of its ill effects is already outpacing heroin.

"If you took a sample on the street, you could get heroin pretty easily," says Phil James, Daybreak's treatment director of inpatient programs. "But meth is just a step away."

The peak year for meth labs

In the early 2000s, both the federal government and Washington enacted laws restricting the purchase of products based on ephedrine, a medication used to treat ailments ranging from the common cold to bronchial asthma that's also a key ingredient in meth. The federal government and Idaho began applying stiff mandatory minimum sentences for meth traffickers.

Gregory says the lack of availability of ephedrine, coupled with the risk of a long prison sentence, has made producing meth unattractive to drug traffickers. But now, he says that meth is being created in so-called "super labs" operated by drug cartels in Mexico, and it's finding its way to the Northwest.

According to Jodie Underwood, spokeswoman for the U.S. Drug Enforcement Administration, the DEA alone seized in 2010 about 250 pounds of meth in Washington, which shot up to more than 600 pounds in 2014. A DEA report released last year found that seizures of meth along the U.S. southwest border increased 20 percent between 2013 and 2014, with smugglers bringing the drug in commingled with candy or hidden in candles or coconuts.

"We do see heroin here, but nothing compared to what the rest of the country is seeing," says Tracy Simmons, DEA assistant special agent in charge, overseeing Eastern Washington and Idaho. "We see more meth cases than any other cases." 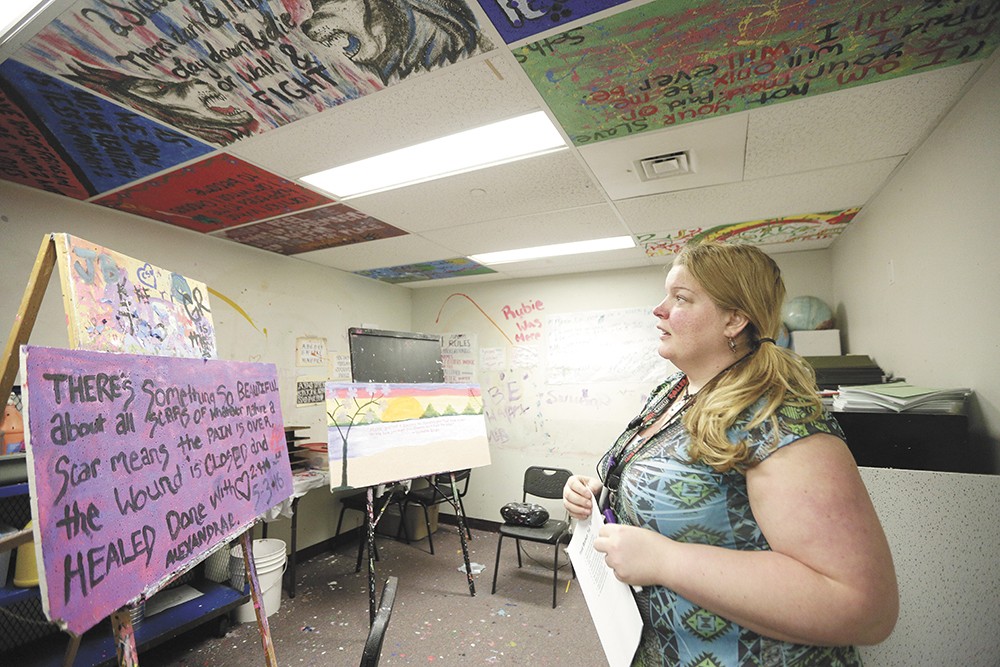 Simmons says that smugglers hide meth and other drugs in hidden compartments in tractor-trailers and drive them up from the border to Washington. Smugglers vary their routes, he says, sometimes going up I-5, or other times going through Bend, Oregon, to deliver drugs to Eastern Washington. It's here, says Simmons, where the meth is divided into smaller amounts that are then trafficked to nearby Idaho and Montana, as well as the Midwest and East Coast.

More meth means more of its accompanying problems, says Simmons. People hooked on it are unable to hold down jobs and may turn to petty crime, he says.

John Carnevale, who once crafted drug policy for the federal government and now works as a consultant, says that Mexico also has laws restricting access to ephedrine-based products, and cartels are turning to the "P2P method" once used by biker gangs in the 1970s and '80s. Meth, says Carnevale, is now cheaper and purer.

"We're not even close to being done with the meth problem," he says. "In fact, we should expect meth use to continue to increase. ... In terms of consequences, in the treatment community, we will see more people knocking on their door."

A 2010 medical examiner's report attributed two deaths to meth overdoses. That jumped to 29 in 2015, making it the largest source of overdoses among illicit drugs. During the same time period, overdose deaths attributed to heroin rose from two to 22.

Opioid dependency has caught the attention of presidential candidates, and both federal and state governments have launched initiatives aimed at curbing the problem. Papich says that all the attention on opioids has resulted in increased regulations and monitoring for prescription drugs. But she says that making prescription drugs harder to get has pushed people toward heroin, which is cheaper and easier to get on the street. What's needed, she says, is a comprehensive effort that includes law enforcement, public health agencies and the courts to curb the use of drugs.

Lynn Everson, needle exchange coordinator for the Spokane Regional Health District, says there's a common perception that because heroin, an opioid, is so different from meth, a stimulant, that there's not much overlap between users of the two. But she says users switch between the two, pointing out that 15 percent of people who accessed the exchange in 2015 reported using both drugs.

Annette Klinefelter, Daybreak Youth Services executive director, says that she's seeing more clients switch between drugs because suppliers have more of a variety of substances to offer. She says they'll even lace marijuana with harder drugs to give customers a taste.

"Drug dealers are the Fred Meyer of drugs," she says. "It's pills, it's heroin, you can have it all."

The use of meth continues

to ebb and flow. According to a Washington State Department of Health report, 12 percent of all adults admitted to publicly funded drug treatment programs in 1999 were meth users. That percentage rose to 22 percent in 2006, dropped to 14 percent in 2010, but has trended upward.

After the use of a drug surges, Carnevale, the drug policy consultant, says the public sees its ill effects, causing many people to say, "This drug is clearly not for me."

However, he says there is often a generational tendency to forget about all the downsides to a drug, and it can make a comeback.

"These kind of epidemics are short-lived because the consequences of use and abuse are so apparent to the public," says Carnevale. "They come and go because we forget about consequences." ♦