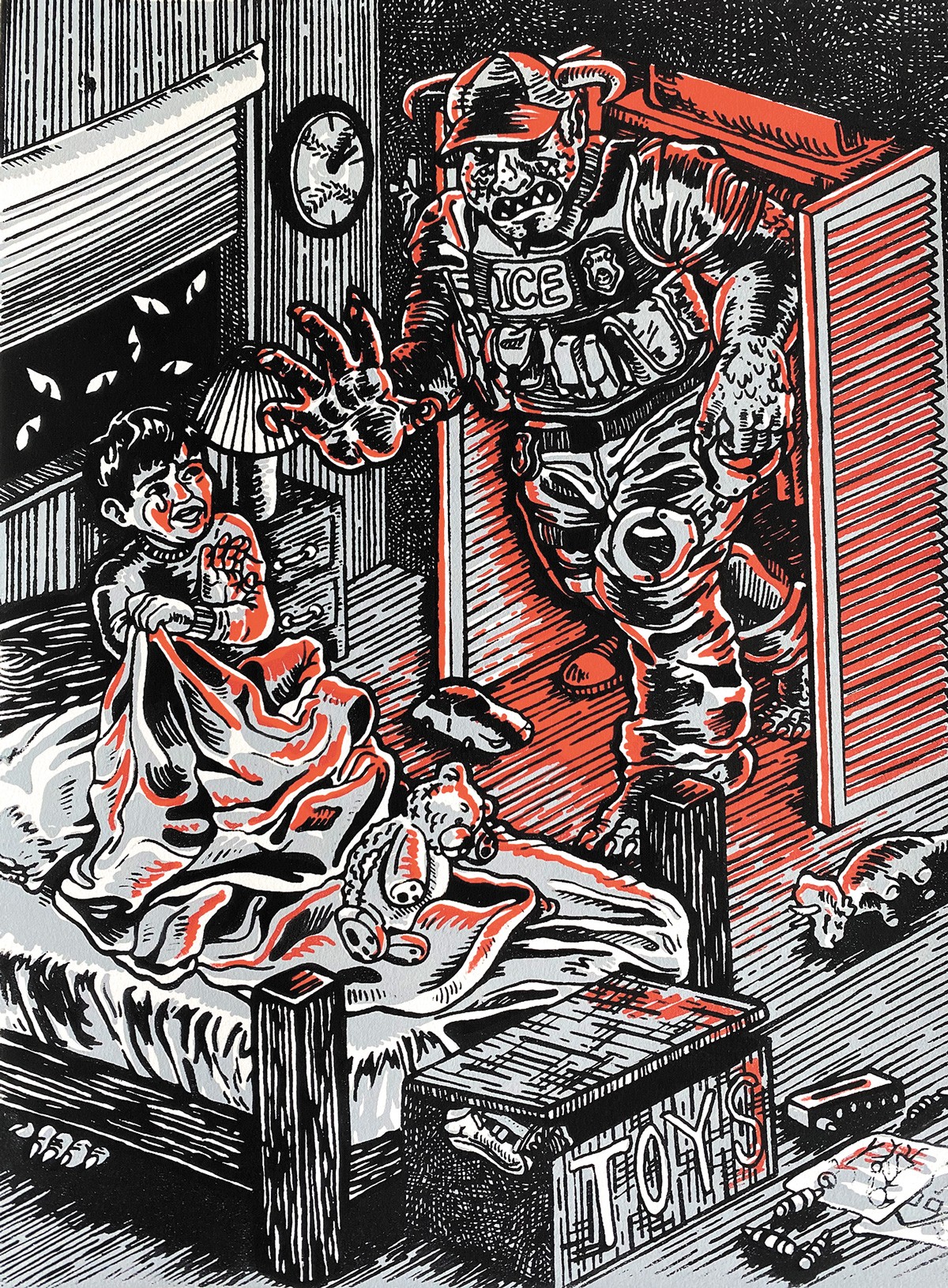 Sounds can be deceiving. Ask the victims of the Whistler, a Latin American folklore figure who stalks his prey while whistling the same seven notes. When the Whistler sounds close by, he's actually at a safe distance. The fainter the whistle, the closer the danger.

"It's about a guy who was cursed by his grandfather after killing his dad, and he becomes a ghost. He walks around carrying a sack of all his dad's bones. If you hear the whistle really far away, then you need to be aware of that because the creature is close to you and will take your soul away," Zambrano says. "He follows guys who are womanizers, so it's a metaphor that you need to respect your partners and respect women. I like the story because of the sound of his whistling. When you hear it, it gives you chills."

As the title suggests, the show is a collection of prints focused on reimagining traditional mythologies.

"We wanted to feature these old legends in a more contemporary way using printmakers," Zambrano says. "So Manuel Guerra and I put out an open call for printmakers working in Latin America and the U.S., and then selected the artwork."

Zambrano is drawn to folklore for its potential to build bridges between people. "I grew up in Venezuela, and I knew about these stories because they were passed down from grandparents to grandchildren," he says. "But then I would hear a similar story in Costa Rica, and then a different version in Colombia."

He became fascinated with the idea of archetypes, and how they would remain similar across language differences and socioeconomic settings. With this show, he is seeking to highlight the ability of printmaking to unite communities despite borders.

The exhibit was originally intended to debut at the SGC International in San Juan, Puerto Rico, but COVID-19 pushed the curators to adapt a digital format. For Zambrano, this has brought pros and cons. "You don't really get a sense of the scale," he says. 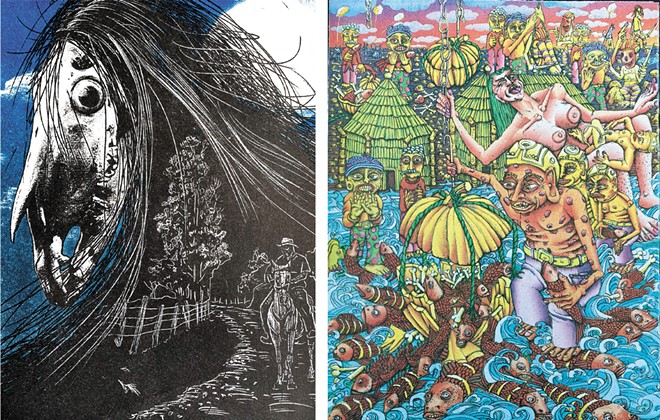 Carlos Llobet Montealegre's La Cegua (left) and Yayael's Bones and the origin of the sea by Matthew J. Egan

Still, despite challenges to hosting the show this way, it's also brought opportunities that wouldn't have been possible otherwise.

"There's an ability for engagement beyond the region because people are able to see and access it through their computers. I've been surprised by the number of people engaged in the exhibit," he says. "All this was organized through the internet and social media. Social media really can be used to bring people together, despite all the negatives."

Nancy Hathaway, studio artist and EWU art professor, has been working to digitize the prints. "I decided to re-create that white space of the gallery for the artwork, so I created a separate website that links from our regular website that just hosts the shows, so there isn't anything else there. It's set up like it would be if you went to a regular gallery space."

It's fitting that the prints are being adapted for a digital space, since much of the collection highlights traditional folklore's relevance in contemporary life. For instance, artist Samantha Bares reimagines the masculine, authoritarian figure of El Cocuy (The Boogeyman) as an ICE agent emerging from a child's closet.

"Most of them revolve around the stories we are told as children — slightly frightening fables that are meant as tales of caution," Hathway says. "But there are others that move outside of that. One talks about a fable in which when a small child becomes injured there's a particular song that's sung to help with the healing process."

The prints were produced using a variety of techniques, showcasing the versatility of the printmaking form.

"I'm excited for this show because of its diversity and because it's given us an opportunity to show works from artists across the country," she says. "It's great to have something that comes from cultural perspectives other than the mainstream, white American perspective that you often get in galleries."

This exhibit is part of a larger umbrella project, the Spokane Print Fest, which will feature several other galleries, online events and workshops throughout the month.

In this time of isolation, sharing art digitally reminds us that we're all a little bit like (hopefully less-haunting versions of) the Whistler. Even when our communities sound distant, they're closer than we think. ♦

The original print version of this article was headlined "Modern Monsters" 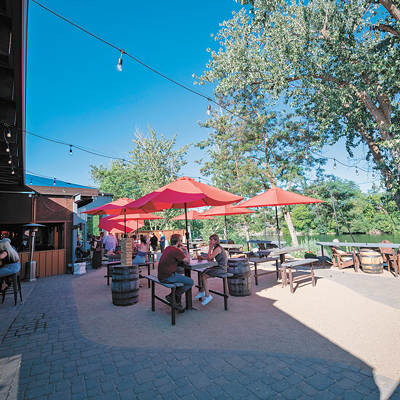