It was the first time since March that there had been any live music on the stage at Lucky You Lounge, and pretty much everyone in the room was crying.

"It was very emotional," owner Karli Ingersoll recalls. "It was very much this feeling of 'we missed this community.' ... Getting people on stage together, even if no one else is in the room — it's really life-giving."

The occasion: The first in an ongoing series of live shows that are being recorded under social distancing restrictions at the Browne's Addition venue, and then uploaded online as a ticketed virtual event. Lucky You is the latest in a string of local businesses and arts organizations that have been hosting these sorts of virtual events as a safe way of providing live music in lieu of in-person events.

With financial support from Kendall Yards developer Jim Franks, Karli and Caleb Ingersoll set up a makeshift studio in their venue, borrowing cameras from their buddy Allen Stone (who has been live-streaming himself throughout the pandemic) and bringing in an array of local artists to do their thing. The Lucky You series has already featured performances by folk rockers Trego and bluegrass singer-songwriter Jenny Anne Mannan, and the venue also hosted the virtual ceremony for the recent Spokane Arts Awards.

"Once we did the Spokane Arts Awards, it was like, 'Oh, this actually isn't so bad,'" Ingersoll says. "Now [the setup] is there, and it's actually really easy and streamlined, so the time and investment in learning how to do it right will pay off."

Also getting into the streaming concerts game is downtown nightspot Neato Burrito, which has, along with its adjacent watering hole Baby Bar, long been a go-to spot for late-night rock shows. But the place has been empty since March lockdowns went into effect, so local musician and Neato regular Norman Robbins decided it was the ideal place to host some virtual concerts.

The Neato series started up just a couple weeks ago and has thus far broadcast shows by longtime rock bands Pit and Dead Serious Lovers, and a musical variety show from Lilac City Live host Ryan Dean Tucker. Robbins says that Neato/Baby Bar owners Patty Tully and Tim Lannigan jumped at the chance to get music back in their space and have been cooperative through the entire process.

"They just immediately were thrilled about the idea," Robbins says. "It's been really nice having mutual agreement every step of the way."

True to the spirit of your typical Neato show, the live stream series is a decidedly DIY operation. Robbins and his friend Luis Mota serve as the crew, setting up their equipment and cameras and then stepping out of the artists' way. Robbins says the process has required some improvisation: He mentions jury-rigging an iPad into a secondary camera, held up by a MacGyvered tripod consisting of a butter knife and a magnetic clip.

"We're trying to keep the spirit of what Neato Burrito and Baby Bar was when we could be downtown," he explains. "It's the kind of place where you stumble in and sometimes there happens to be a good show going on." 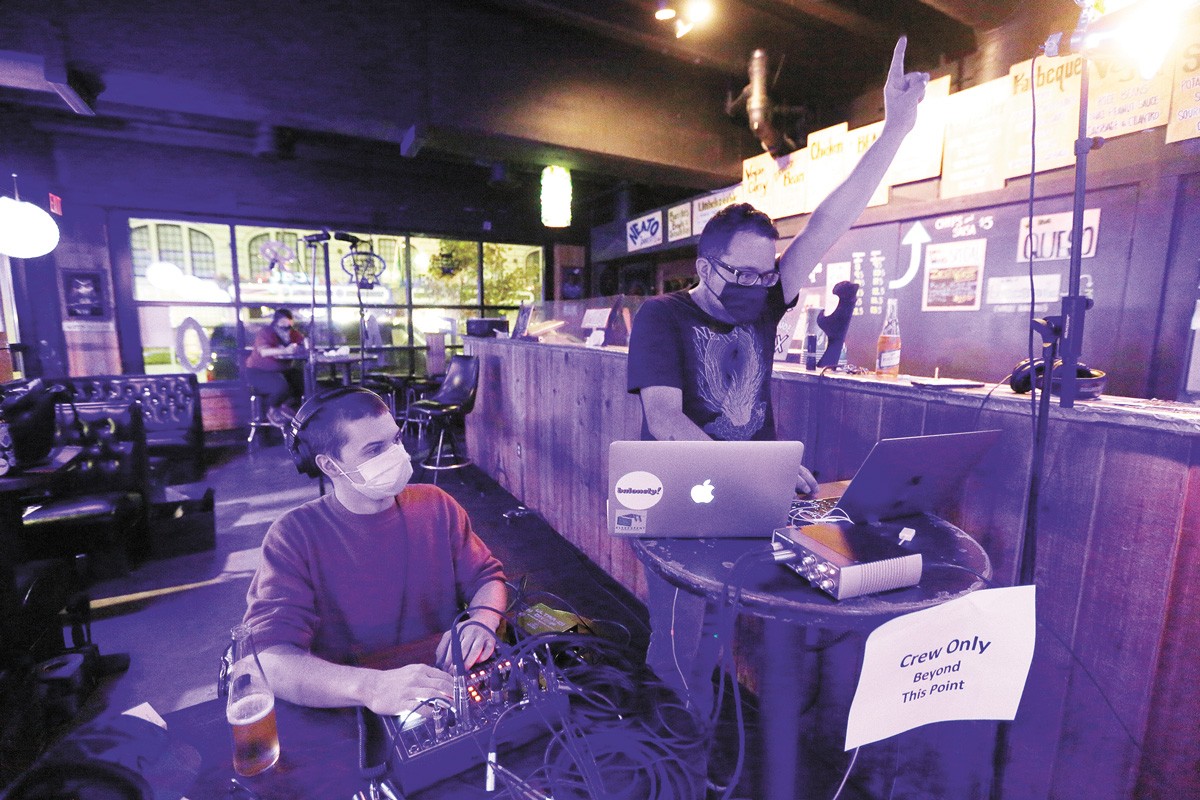 Although they ran into a few technical bugs at the outset, they've since found their groove. Right now, all of the ticket sales for the virtual shows go straight to the performers, and Robbins says they've booked 10 or so artists into November, including his own band BaLonely and Tully and Lannigan's band Fun Ladies.

While the Baby Bar shows are broadcast live, the Lucky You concerts are prerecorded, filmed and edited in real time like you might see in a TV studio. Both venues are broadcasting their events through a service called Veeps, an inclusive platform that not only allows artists to host their virtual shows but to sell tickets. It's far more streamlined than simply broadcasting through Facebook or Instagram, which has begun blocking profiles that aim to "create a music listening experience."

Mastering the art of the virtual concert is actually a good skill to learn now, because there's always the possibility that virtual concerts could remain a part of artists' lives long after the pandemic has ended. Will audiences become attuned to the experience of staying at home and watching a live-streamed show?

"There will still be people going out to shows and experiencing bands. But then on top of that, you're gonna have these venues that are streaming the shows and selling streaming tickets to people who just don't like going out," Robbins predicts.

"It would be cool if it became an extra income stream, potentially, for bands," Ingersoll says of the live stream trend. "And just something for the community, like people who have kids and can't get a sitter."

But while the music scene is suffering from lockdown restrictions, both Robbins and Ingersoll hope that these virtual shows boost morale until venues can be packed again.

"Musicians are really struggling right now. It's a really demoralizing time," Ingersoll says. "I worry that if there's not stuff like this until we can do it live again, people are just going to give up. Musicians already have an easy time getting beat down emotionally, when they don't have that thing to connect to their art."

"This shutdown is turning the internet into such a negative place," Robbins says. "These live streaming shows are going to bring a little more positivity into anyone's life that's at home and having a hard time right now, and hopefully get people inspired." ♦

For a full schedule of upcoming live streams, see babybarneatoburrito.veeps.com and luckyyoulounge.veeps.com.