Young Kwak
The Spokane Police Department won't say how many of its officers are vaccinated.

But the protesters weren't the only ones there that day strongly opposed to vaccine mandates.

So too were some of the Spokane police officers on duty monitoring the event, body camera footage shows.

"That's F'd up," one officer says about the state vaccine mandate for health care workers. "They're going to try to do it to us," another says.

"That'll be funny," says the first officer. "Are they going to fire us all?"

"Well, that's the thing," the second officer says. "How are you going to replace 150 cops?"

The footage was obtained via public records request by local activist Kim Schmidt, who shared it with the Inlander. Another video she's shared on YouTube previously shows Spokane police officers monitoring a protest of masks and vaccines on Dec. 15, five days after the FDA's emergency use authorization of the Pfizer vaccine. In it, an officer says that he doesn't think the police department "could survive" a vaccine mandate.

The interactions underscore the resistance to vaccine mandates among local police and emergency responders, foreshadowing a potential legal battle that may arise from a vaccine requirement. Neither the Spokane Police Department nor the Spokane County Sheriff's Office has released information about vaccination rates in their departments, but across the country, more transparent departments have released data showing vaccination rates below the national average.

It remains unclear whether President Joe Biden's new vaccine mandates on employers with more than 100 employees will apply to local government or law enforcement, city of Spokane spokesman Brian Coddington says. Right now, local law enforcement does not fall under Gov. Inslee's vaccine mandate since they are not state employees or health care workers.

But a mandate that applies to local law enforcement would likely receive pushback. Some of the state troopers, correctional officers and city firefighters who do fall under Inslee's mandate already filed a lawsuit earlier this week seeking to overturn it. In Portland, the city tried to impose a vaccine mandate on all employees including police, only for the city to backtrack due to an Oregon law that may have made the mandate illegal.

But the battle over vaccine mandates for police and first responders has strong implications for public safety. Schmidt, who founded local activist group Stronger Together Spokane, argues that unvaccinated police put both themselves and the public at risk.

"They're responding to calls," she says, "and putting the general public in danger."

Last month, the Inlander asked dozens of local leaders whether or not they'd been vaccinated for COVID-19 and, if so, how they were encouraging others to get the vaccine.

Spokane Police Chief Craig Meidl did not respond to Inlander questions because, according to spokeswoman Julie Humphreys, he was on vacation.

Now, Humphreys says Meidl "respectfully declines to comment on his vaccination status," believing it is a personal matter.

"He believes because it's such a contentious issue, it is not productive to hold a public discussion about who is vaccinated and who isn't," Humphreys says. She said that Meidl declined the Inlander's request for an interview.

In response to the body camera video of officers speaking against vaccine mandates, Humphreys says that it's not necessarily representative of the entire department and that they follow state mandates around mask wearing and guidelines around possible exposures.

But it remains a mystery how many Spokane police officers are vaccinated. Humphreys says the department does not track that information.

Spokane City Council President Breean Beggs argues that it should be tracked — not just for police officers, but for all city employees.

"We could use that information to provide incentives to employees who chose to get vaccinated and also try to make sure that unvaccinated employees have limited contact with the public," Beggs says.

Beggs has asked for vaccination rates but says the city administration "has made a deliberate choice not to seek or keep" it. Coddington, the city spokesman, says the city may know of an individual employee's vaccination status but that the data isn't kept in the aggregate. 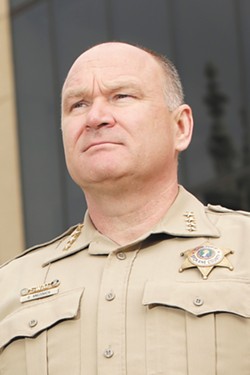 The Spokane Police Department is not alone in keeping private how many officers are vaccinated. The Spokane County Sheriff's Office does not track that vaccination status either, though county Sheriff Ozzie Knezovich has confirmed to the Inlander that at least he is vaccinated for COVID-19.

So far, Spokane Mayor Nadine Woodward hasn't required city employees including police to get the vaccine. Even Beggs and other members of the City Council don't necessarily favor a mandate coming from the city.

"I believe vaccine mandates for employees interacting with the public should be considered but would prefer it to be a federal, state or health district mandate rather than a piecemeal approach by a city," Beggs says.

He adds, however, that if the current spread of COVID continues to get worse, cities may need to consider mandates.

However, that may not be a promise that police officers would get the vaccine. And if officers refuse, as a few have said they would, it could negatively impact the department as a whole.

That's what seems to be happening to the Spokane Fire Department. City firefighters do qualify for Gov. Inslee's vaccine mandate, but of the 280 members of the Spokane Firefighters Union, 50 have filed for a religious exemption, says union president Tim Archer.

The union is in bargaining with the city on reasonable accommodations for those firefighters, but Archer says the city wants to remove them from the field. Archer, who filed for a religious exemption himself, would be one of them.

"I believe forcing a vaccine by these punitive means upon a free people is immoral," Archer tells the Inlander.

COVID-19 was the leading cause of death for police officers in 2020, according to the National Law Enforcement Officers Memorial Fund.


But that doesn't seem to be a concern for the Spokane police officers shown in the body camera footage discussing vaccines. They dismiss COVID as something like a cold or a flu. Their reasons against vaccines mirror the reasons commonly used by the vaccine skeptics in the general public. They say that they are already healthy and don't like putting things in their body. They fear the vaccine's long-term effects haven't been researched. Or they say they've already had COVID and have immunity.

Above all, they feel their vaccination status is a personal decision.

Still, it's one that can have a profound effect on public health and safety.

In jails and prisons, COVID-19 can spread like wildfire. Since the pandemic began, Airway Heights Correctional Center has had nearly 1,700 confirmed cases — easily the most of any state prison — and four deaths attributed to COVID-19. A total of 278 cases were among staff there. The bulk of those numbers came during an outbreak in December, before vaccines were available.

Just this week at Spokane County Jail, there were about 27 positive cases among staff as of press time, according to Kelli Hawkins, spokeswoman for the Spokane Regional Health District. That's out of about 300 staffers, she says. Hawkins, however, says the jail is mostly doing a good job "keeping it under control."

Hawkins says law enforcement and first responders may not necessarily be more at risk than other professions interacting with the public because government agencies often have more robust testing protocols in place. Still, she adds that "our stance is that everyone should get vaccinated because it is safe and it is effective."

Spokane City Councilmember Lori Kinnear doesn't just point at first responders as the ones who need to get vaccinated. She says the entire community needs to stop politicizing masks and vaccines, urging people to look at the soaring hospitalizations in the Inland Northwest.

"If you want to have elective surgery now, you can't. If you have a heart attack, good luck. And that's not OK," she says. "We like to point at police or fire — but it's anybody who's not vaccinated."

Still, she says with both police officers and firefighters, people don't have a choice but to have contact with them.

"If you're having a heart attack and call 911, the people who are going to respond are firefighters. You can let them treat you or die," Kinnear says.

Spokane Fire Chief Brian Schaeffer, for his part, says he's vaccinated and encourages his firefighters to do the same.

But Meidl, the police chief, has stayed quiet. Beggs says he doesn't know what, if anything, Meidl has done to even encourage vaccination among his ranks.

"I have no information about whether Chief Meidl has encouraged vaccination," Beggs says. "I wish I had examples of it."

Ultimately, a Spokane police officer discussing vaccination at a December protest may have predicted how the next few weeks or months will play out.

"I think somebody up the chain, a long ways up the chain, above our chief... I think somebody statewide is going to say 'it's mandatory. If you're a first responder, you will get the vaccination, period. If you don't get the vaccination, that's your choice, but you can't continue in your job,'" the officer says. "I think at that point, a judge will probably step in." ♦