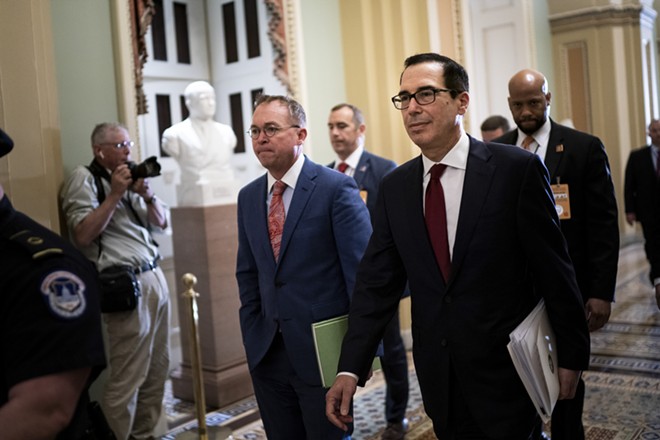 Erin Schaff/The New York Times
Mick Mulvaney, left, the acting White House chief of staff, and Treasury Secretary Steven Mnuchin head to a hearing of the House Financial Services Committee on Capitol Hill, in Washington, May 22, 2019. Mnuchin said Wednesday he was trying to determine who in the Internal Revenue Service wrote a draft legal memo concluding that he must release President Donald Trump’s tax returns to Congress, and he insisted that he disagreed with its findings.

ALBANY, N.Y. — New York State lawmakers Wednesday gave their final approval to a bill that would clear a path for Congress to obtain President Donald Trump’s state tax returns, injecting another element into a tortuous battle over the president’s refusal to release his taxes.

The bill, which is expected to be signed by Gov. Andrew Cuomo, a third-term Democrat and regular critic of Trump’s policies and behavior, will authorize state tax officials to release the president’s state returns to any one of three congressional committees.

The returns — filed in New York, the president’s home state and business headquarters — would likely contain much of the same information as the contested federal returns, though it remained unclear whether those congressional committees would use such new power in their investigations.

The Legislature’s actions put the state in a bit of unchartered legal territory; Trump has said that he is ready to take the fight over his federal tax returns to the Supreme Court, and it seems likely that he would seek to contest New York’s maneuver.

Republicans have called the effort in Albany a “bill of attainder” — an unconstitutional piece of legislation aimed at a single person or group — while also decrying the potential invasion of privacy, suggesting that federal officials would conduct improper “fishing expeditions.”

Still, for Democrats for whom the president’s steadfast refusal to release his returns has been a constant frustration, the legislative action was being cast as both a victory for states’ rights and the often unsung power of a state legislature.

“It’s a matter of New York’s prerogative,” said state Sen. Brad Hoylman, D-Manhattan, who sponsored the bill in his chamber. “We have a unique responsibility and role in this constitutional standoff.”

Once signed into law by Cuomo, the legislation would require the commissioner of the New York Department of Taxation and Finance to release returns to the chairmen of the House Ways and Means Committee, the Senate Finance Committee and the Joint Committee on Taxation for any “specified and legitimate legislative purpose.” Such a request would have to be made it writing, and only after a request for federal returns has been made to the Treasury Department.