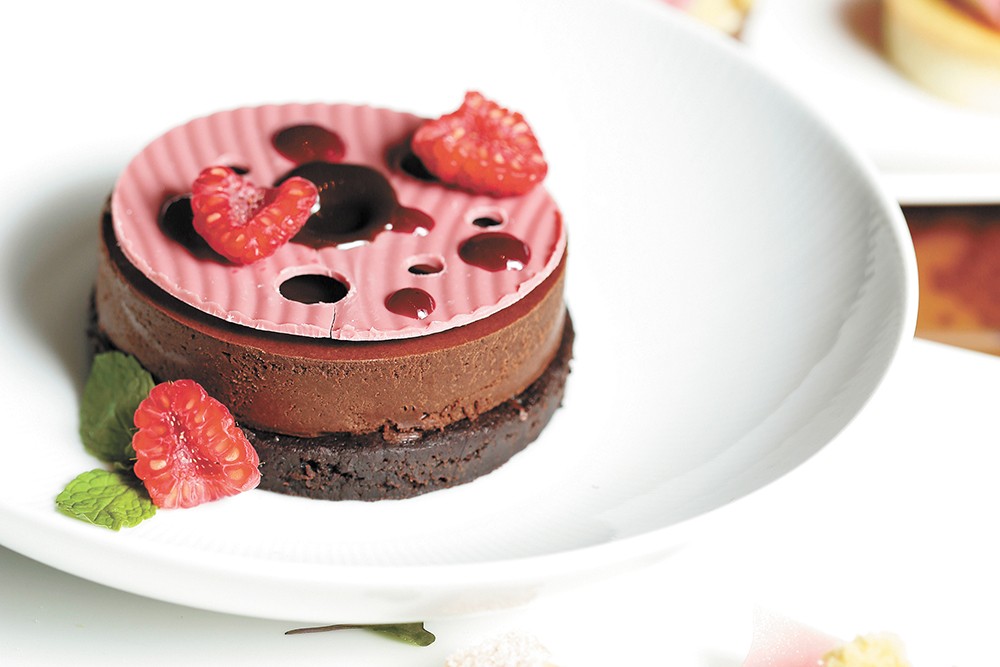 Move over milk chocolate, there's a new sweetie in town and her name is Ruby.

Like a "citrusy white chocolate" is how Hay J's Bistro pastry chef Hayley Fechser describes the taste of the world's newest chocolate — ruby chocolate — which she uses at the Liberty Lake restaurant to dip raspberry chocolate truffles.

"The chocolate is pretty similar to other chocolates I work with as far as the consistency of it," says Fechser, who's served as pastry chef for the restaurant and its connected artisan market, Hay Jay's Butcher Block, for the past four years.

Ruby chocolate, which is distinctively pink-colored, comes from cocoa beans harvested in Ecuador, Ivory Coast and Brazil, according to Barry Callebaut, a world-wide cocoa and chocolate manufacturer that first introduced audiences to the new color and flavor in 2017. It brings the number of distinct chocolate varieties to four, including white, milk and dark chocolate. Ruby is the first new chocolate variety to be introduced in more than 80 years, after white chocolate came onto the market in the 1930s.

When it was first introduced two years ago, Callebaut touted ruby chocolate as a new cacao bean (the pods are sometimes referred to as cacao until processed into cocao), yet chocolatiers were quick to determine the source of the product's pinkness. Similar to how coffee beans start out bright red and brown up during roasting, ripe cacao pods can be handled so that they retain their inherently reddish tint and citrusy flavor through processing.

Northern Quest Resort & Casino pastry chef Kristina Stephenson saw this firsthand while visiting Bali, an up-and-comer in the international chocolate market, where she tried a Balinese ruby cacao pod fresh from the tree.

"It was very fruity and ventured on the tart side of my palate — nothing you'd expect when comparing to chocolate as we know it," Stephenson recalls.

She got her hands on ruby chocolate after attending a launch party for ruby chocolate this summer hosted by regional food distributor Sysco Spokane, and began playing around with recipes.

"The ruby adds a brilliant pop of color and flavor and pairs well with many different ingredients," Stephenson says. "I tend to incorporate a savory aspect in many of my desserts, so ruby being so versatile makes it virtually effortless to integrate into dishes."

"Servers will then pour warm chocolate sauce table-side into one of the decorative holes of the ruby disk, filling the center of the mousse with the warm 'lava' associated with the classic dessert," she explains.

At MiFlavour bakery in East Spokane, pastry chef and co-owner Ella Piskun is making ruby chocolate bars. Look for them at My Fresh Basket later this year, as well as in specialty drinks when MiFlavour opens its new full-service cafe in November.

"It has been very popular and people love how beautiful it is along with the delicious, unique taste," Piskun notes.

Fresh Plate Market Catering's Barbara Pagarigan has also incorporated ruby chocolate into her recipes, like fondue, and in frosting for sugar cookies and buttercream for cupcakes.

"People are liking the color and nuances of it," says Pagarigan, who's currently visiting England, where ruby chocolate has been on store shelves for years. 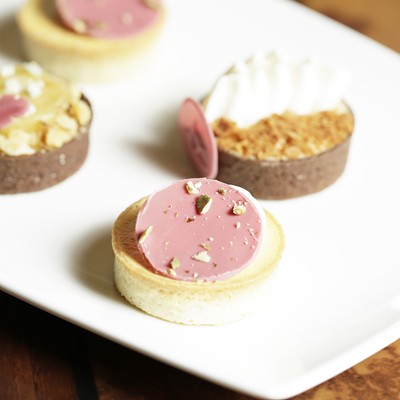 In America, however, ruby chocolate is still something of a novelty and has only been available through such outlets as Trader Joe's and Whole Foods since early summer of this year due to some rulings by the U.S. Food & Drug Administration.

Webster has been an ardent fan of ruby chocolate since he first heard about it three years ago, yet he didn't get to work with it until this spring, while attending a product launch party at the National Restaurant Association Show in Chicago.

"It was a phenomenal event where we got to break into some ruby bark with a hammer to signal the official beginning," he says, likening the event to the opening bell at the stock exchange.

One of the first things Webster made with it may also be one of the most unexpected: Ruby "mortadella," similar in appearance to salami, yet actually a ganache-based treat he remembers from his youth.

"Chocolate salami is an Italian and Portuguese treat, especially during the holidays, and is basically chocolate, butter, egg, nuts and sweet biscuits combined and shaped into what resembles salami," Webster says. "It is then set and rolled in powdered sugar before being sliced and resembles the charcuterie we all adore."

"You want people to know that they are consuming something special," he says. "After all we didn't wait a lifetime for pink chocolate for nothing!" ♦

The original print version of this article was headlined "Think Pink"