Atmosphere and live music aside, it's nearly impossible to say no to Zola after a long day. Happy hour runs from 4 to 7 pm Monday through Saturday and all day Sunday, and features $2 PBR, Bud Light and Coors Light, $4 well cocktails and a food menu that starts at $5. Chances are you can buy a drink or two with just the change buried in your couch. (AZARIA PODPLESKY)

In a little more than a year, the Bartlett has managed to capture the heart of live music fans all over town. With an all-ages-friendly calendar featuring everything from indie rock and hip-hop to folk and comedy, events that put local talent in the spotlight, like open mic nights, poetry slams and the Round, an eclectic festival (Bartfest), and solid happy hour offerings, it's no wonder Inlander readers named the Bartlett a nightlife triple threat. (AP)

Is there anything better than hopping onstage and singing your heart out to your favorite song? Monterey Café understands your love of karaoke and offers folks the chance to live out their dreams of stardom every night of the week, beginning at 9 pm. And when you need a breather (or a bit of liquid courage), there are a variety of drink specials and a late-night menu to enjoy. (AP) 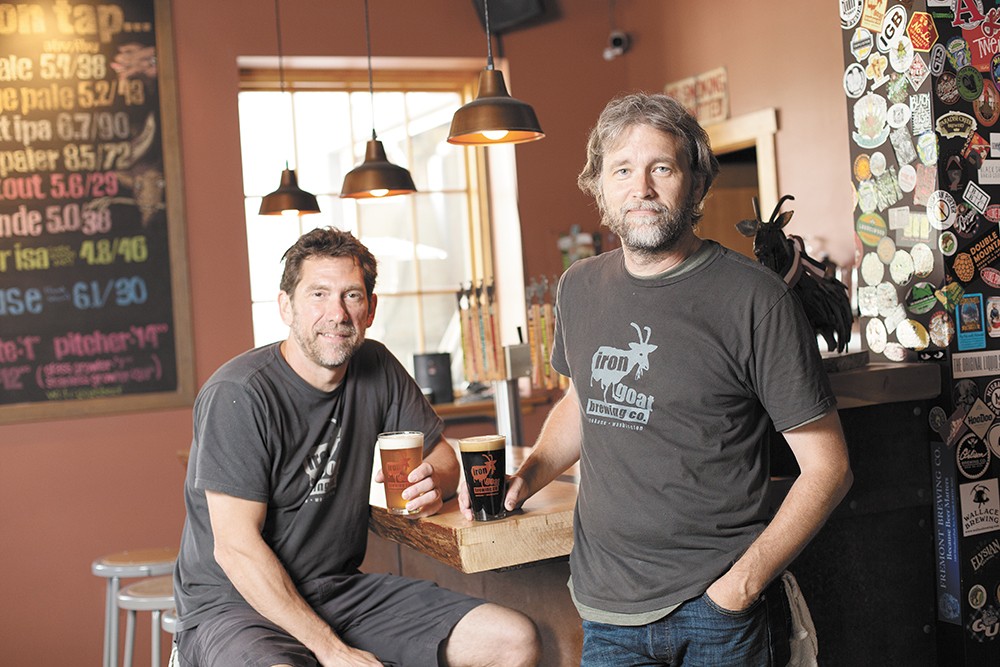 It's an unseasonably warm and sunny afternoon

a few weeks before spring officially takes over the calendar, but there are few signs of life on the streets outside Iron Goat Brewing Co.'s small brick home in east-central Spokane.

Inside, though, it's a whole other matter. Regulars and visitors traveling the so-called "Ale Trail" jostle for tables just minutes after the tasting room opens. Iron Goat's owners are hustling to deliver samples to crowded tables dotting the sparse interior. As soon as someone hits the road, two more seem to enter.

A bustling tasting room isn't a surprise to the Iron Goat gang after nearly three years in business, but it wasn't expected to be quite the scene it's become.

"When we first started, we thought, 'Oh, we should have a little taproom so people can sample the beer,'" says Heather Brandt, co-owner with her husband Greg and another couple, Paul Edminster and Sheila Evans. "We thought it would be a very minor part of what we do. We were completely wrong. ... It's become a more integral part of the business than we ever anticipated."

Instead of a quiet appendage to the main operation, the space has turned into a community gathering place to chat, play trivia, hear music or simply sample the latest batch. The lack of televisions helps fuel conversation, Edminster says, and he considers the room to be the best way, other than brew fests, to "connect with customers, with the craft beer lovers."

"It's not necessarily a neighborhood place," Brandt adds. "They come from all sides of town. It's kind of a destination. On any given night we probably know half the people in here."

This year, there's been an added boom thanks to Wednesday night "Year of the Goat" parties, named for this year on the Chinese zodiac and celebrated through the creation of a new 10-gallon recipe every week.

The growth of the tasting-room scene mirrors that of the company in general — they just started bottling, and in 2014 produced nearly 2,000 barrels of beer — and of craft brewing in the region.

"The people who come in, they're definitely Spokane craft beer supporters," Edminster says. "There's really strong support in the community for all the local breweries, and that's really great. You wouldn't have a craft-beer scene in Spokane without those people." ♦ (DAN NAILEN)

With 36 signature martinis, there really is something for everyone at Twigs. From the classic Twigs Martini to the classy High Roller, to more imaginative drinks like the Jalapeño Cilantro Margatini, the Chocolate Kiss and the Orange Creamsicle, Twigs has it covered. There are six locations in Washington, and more throughout the Northwest, so there's plenty of opportunity to try one (or more) of the 36 yourself. (AP)

As LeftBank Wine Bar says on its website, "We drink wine, we love wine." Judging by the votes, readers feel the same. LeftBank is all about variety and boasts a menu that includes whites, reds, Rieslings, champagne, pinot noirs, Cabernet Sauvignons and more. They also offer a weekday happy hour special of $2 off glasses of wine (which normally range from $7 to $15) and $1 off beers. (AP) 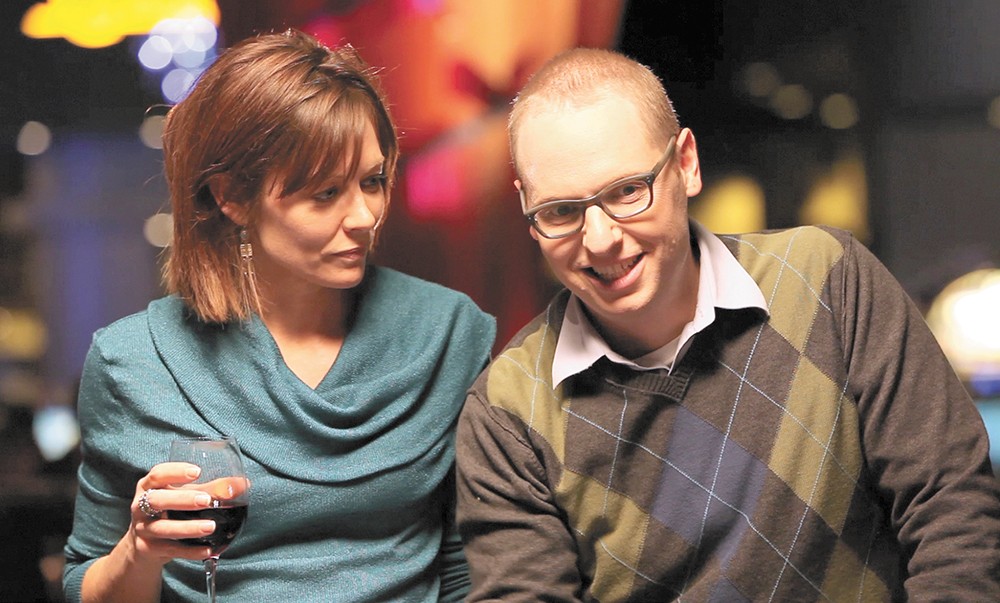 Mark Robbins, an English teacher at Lewis and Clark High School, has acted before.

At one time, he was in a Seattle troupe alongside future Community star Joel McHale. He founded Spokane's improv house, the Blue Door Theatre. But until a few years ago, a lot of it had been voice-acting gigs for investment banks or pest control companies.

Then he got a call from Northern Quest Resort and Casino wanting him to fill in, last minute, for an actor who'd just been fired. And so Mark Robbins became "Mark," of Northern Quest ad fame.

Rather than the hoary casino-ad tropes of roulette tables, slots and massages, Northern Quest's ad series focused on the comedy between on "Mark," a happy idiot of a husband, and "Brooke," his long-suffering wife.

In one ad, Mark arrives home, oblivious to the tableau of roses and candles and Brooke's skimpy attire, and apologizes for being late: He'd stopped by the Northern Quest 10th anniversary celebration.

"Oh, that would be bad," Brooke says. "To forget their anniversary."

"It would have been embarrassing," Mark chuckles. Then he spots the roses and candles. "Your folks coming over or something?"

Sarcastic Wife and Doofus Husband, of course, has been a creaky comedy staple for decades. But Robbins imbues the old trope with new life. He's cheerfully ignorant. His idiocy is good-natured and charming. He's got great comic rhythm, pausing to let a beat sink in before delivering the punch line. The physical mismatch between the actors adds to the comedy, Robbins says. (In real life, Brooke — Brooke Stocker — is not married to Robbins, but to former Major League shortshop Kevin Stocker. In one profile, Kevin says he considers Brooke, an Ironman competitor, the true athlete in their family.)

"We're kind of strange bedfellows, because I wasn't cast originally," he says. In other words, Brooke looks like an attractive actress and Mark, well, he looks like a high school English teacher. (He also took third in the Inlander's Best Teacher category.)

So now, Robbins has achieved that most valued of positions: minor local celebrity. He gets recognized in the supermarket and sees his face on local billboards. He has one of Northern Quest's cardboard cutouts of him hanging in his classroom. The grandeur of that, of course, wears off quickly for high schoolers.

"The kids in my class are less impressed than the kids in the hall," Robbins says. ♦ (DANIEL WALTERS)

With 50 options on tap, it was almost a given that readers would vote Manito Tap House into the top spot. Manito focuses on craft beer and Northwest wines while also offering a full bar of spirits. If that wasn't enough, the tap house is also cyclist-friendly and was the first 4 Star Certified Green Restaurant in town. "Eat, drink and beer merry," indeed. (AP)

Whether you have your poker face down pat or are a gambling novice, Northern Quest has the game for you. The casino boasts more than 1,650 slots and progressives, table games (including blackjack, craps, roulette and ultimate Texas Hold 'Em) and daily poker tournaments and Keno. When you need a break after raking in the cash, Northern Quest offers a full event calendar and food options galore. (AP)

Shaking your tail feathers has never been easier than at nYne. Talented DJs, like DJ C-Mad, DJ Patrick and DJ The Divine Jewels, spin every Friday and Saturday starting at 9 pm (often with no cover), and usually get the afterparty started once a headlining act has performed, too. There's trivia and karaoke if dancing isn't your thing, but with so much going on at nYne, how could it not be? (AP)

Though open less than four months,

Durkin's fits whatever mood you happen to be in at the moment, and indeed, one of its key strengths is the nuanced difference between the upstairs and downstairs bars. Upstairs, patrons flirt with the bartenders and each other while groups tuck into cozy booths and dig into hearty meals. Stepping down the staircase into the dimly lit downstairs bar, one is transported to a time long ago when hiding out in these very basements was the only way to secure a stiff drink.

"Initially we got our inspiration from other restaurants around the country. We'd seen places with restaurants upstairs with detached bars downstairs, where you can relax and cut loose a little bit ... get out of the restaurant scene and go down to the basement, hang around get a cocktail, just lounge," explains co-owner Ben Poffenroth.

The upstairs and downstairs bars' cocktail menus are equally distinctive.

"Upstairs, we decided to stay with the classics. When we opened, we wanted to do a menu we could execute, sticking with what we like and what's going to be the most approachable right off the bat. Downstairs, we have a mixture of classic and house cocktails," says Poffenroth. "I think the more I've talked to our bartenders and the more we've gotten comfortable, the more we are excited to make our own infusions."

"All of our bartenders are great. Curtis Day is our bar manager at Casper [Fry] and Durkin's. He's developed all the menus, helped set up and been grinding it out with me. He could go to Portland or Seattle and do just fine with the top bartenders there. Everything we do right now is unpretentious," continues Poffenroth. "We do it because we like it and go with the moment and luckily the response has been pretty great." ♦ (AMY MILLER-KREZELAK)

Whether you're a hard-core movie buff or you just like to catch a flick every now and then, AMC River Park Square is the best place to see the latest films as soon as they're released. Studio-backed, independent, IMAX and 3-D: AMC has it all. And at $6.60 (senior), $7.65 (child) and $10.49 (adult), the tickets, plus daily military discounts, won't break the bank. (AP)

If baseball is America's favorite pastime, then bowling has to be a close second. And when it comes to bowling, readers say Hugo's on the Hill is the place to be. There's open-play bowling seven days a week; at least one special, including deals on birthday parties, moonlight bowling and "date night," almost every day of the week; and a casino and sports lounge for good measure. (AP) 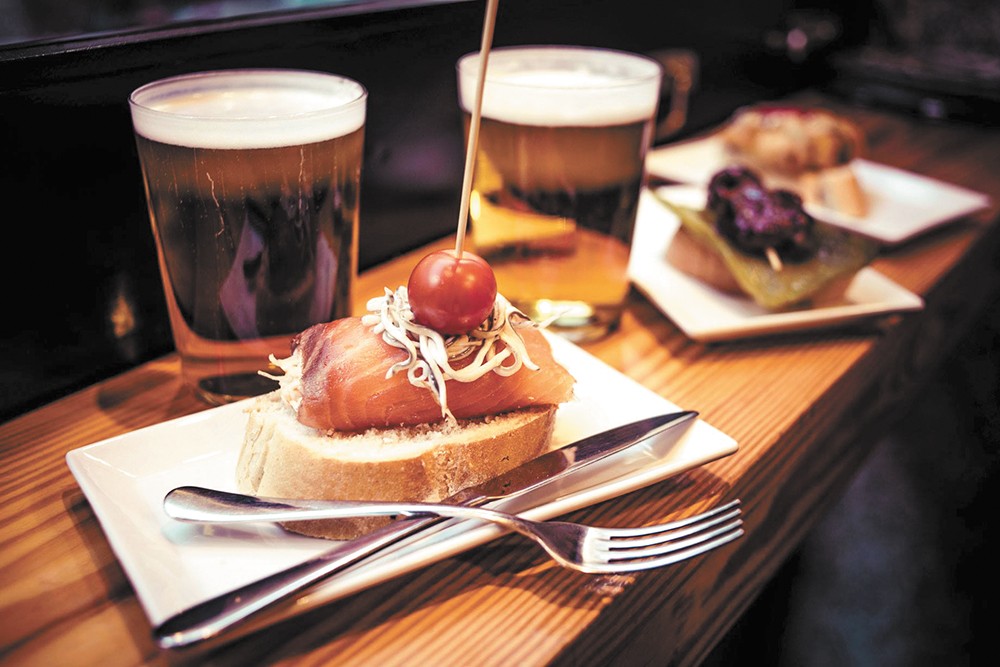 Select from more than 50 beers at Crafted.

In most other winters,

outside seating would be a distant hope for the coming spring. But anyone with skin knows this hasn't been a "real winter."

Winter or not, the entire scene would have been impossible not too long ago.

"If you had asked me if I would open a restaurant in Coeur d'Alene 10 years ago, I would have said, 'Hell no,'" owner Rob Berger says.

Berger, a veteran of the industry, got his start designing software for restaurants. He employs that at Crafted with tableside iPads that show all the 50-plus beers on tap, with descriptions and IBU and ABV information.

Any craft beer lover — the type who scoffs at the idea of Budweiser or Coors actually being called "beer" — will tell you the Northwest is a haven for those who love quality brews. Tap houses with 30, 40, 50 or more craft beers on draft are practically becoming the norm, not the exception, in the craft beer and gastropub restaurant space.

Berger attributes the success of Crafted, which opened last June, to the team he picked to oversee operations — from the kitchen with its higher-end, uniquely named entrées (e.g., the "One Giant Leaf for Mankind" salad) to the bar with rotating beer taps featuring local and international microbrews.