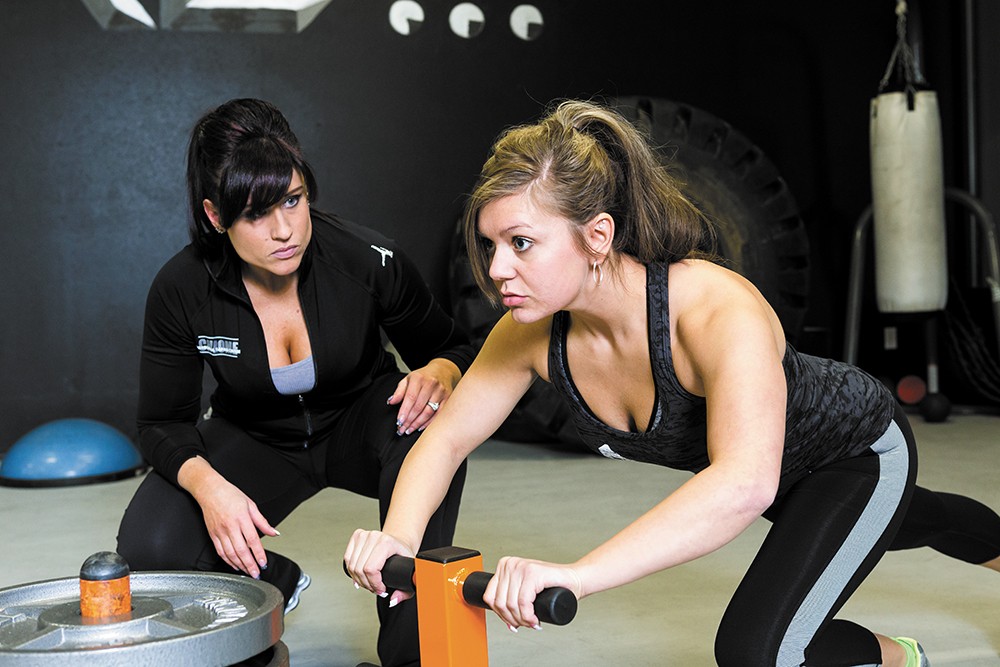 After her first training session at Chrome, Brenna Grover cried the whole way home in her car. Her body ached. It was the hardest she'd ever worked out in her life. "I just wanted to fall over about five minutes in," she says. But Grover came back. Again and again.

A few weeks earlier, at the Empire Classic bodybuilding, fitness and figure competition in Spokane, Grover won a year's worth of free personal training and nutrition counseling at Chrome Personal Training Centre. Grover, who's 23 and lives in Spokane Valley, was going through a bitter divorce at the time. She was a full-time student with no income and two small children. She was donating plasma for gas money. At 5-foot-2, she weighed 185 pounds at her heaviest. There was no way she could afford a gym membership.

She was unhappy and unhealthy. She wanted to change her life in more ways than one.

"A lot of people think [bodybuilding] is a crazy glamorous sport and it really isn't. It's highly challenging mentally and psychically," Holloman says. "It literally is, not to be cliche, eat sleep and breathe, blood, sweat and tears. ... It's a hell of a process."

And Grover can attest to that. Trainers at Chrome have a reputation for being tough. Holloman says her approach has been called "Jillian Michaels-esque." They push you, Grover says, until you know what you're truly, physically capable of.

"They'll make me do something that I wouldn't choose to do by myself," Grover says. "I'll be completely out of it — have my eyes shut and crying — and I can still get 10 more reps in. I would never have known I could do that unless someone was forcing me to try."

But within a month of training at Chrome, Grover, who had never enjoyed exercising before, says she "couldn't go without [her] workouts."

"I had to be there. I wanted to be there," she says. "It's like an addiction. You love the feeling you get. You love seeing the progress."

Her energy levels improved and her confidence skyrocketed. A couple months ago, Grover applied for a better paying job as a bank teller. She walked in Bank of America — something she never would have had the confidence to do before — and was offered a job on the spot.

"I'm so much more active and my mood is just better on a consistent basis," Grover says. "It's affected the whole family in a positive way because I just feel good daily and it's not even about how I look — it's my actual body. I actually feel good and I just wake up feeling better."

A full year after her fitness journey began, Grover will step on stage in a sparkly bikini at the Empire Classic this May. She's not nervous; she's excited. She never thought she'd wear a two-piece bathing suit ever again. ♦

7 Ways to Get Started

Want to get in the best shape of your life? Here is some of Brooke Holloman's diet and fitness advice that even non-bodybuilders can use.

You heard it before: Muscle weighs more than fat. So if you're losing fat and gaining muscle, don't obsess over the number on the scale. "You should be able to go to the gym, work hard, eat what you're supposed to and gauge your progress on how you look, how you feel and how your clothes fit, rather than what the scale says," Holloman says. "You should have more energy. You should have more confidence. You should feel tighter. Your posture should be better."

Water, that is. Holloman advises her clients to drink between one and two gallons of H2O throughout the course of a day. Proper hydration fuels muscle growth during training, detoxifies the body and lubricates joints to stave off injury. Sufficient water consumption will also help you look a little leaner. "When you're dehydrated, you tend to hold water on the outside of your muscle," Holloman explains. "When you feel kind of squishy, sometimes it's not even fat; it's water."

You should know by now that eating "clean" foods (lean meats, complex carbs and healthy fats) is key to achieving your fitness goals. But that doesn't mean you have to choke down a diet full of plain chicken, brown rice and steamed veggies. "People make health food taste like crap," Holloman says. She suggests setting aside some of your free time on the weekends to prepare healthy and convenient meals for the rest of the week that you'll actually enjoy.

Whether you're doing eight, 10 or 12 reps a set, what's most important, Holloman says, is that you're performing the exercise correctly. "If you can't feel that muscle contracting, you're not using it," she says. "It's not about the weight of the weights, but the efficiency of the exercise. Form is imperative — sending the signal to the proper muscle, making sure your whole body is tight through the whole exercise." Proper form also prevents injury. Check out online instructonal videos at sites like bodybuilding.com to learn how to correctly perform various strength-training exercises.

It's common for bodybuilding and figure competitors to train six days a week for a couple of hours a day, Holloman says. But at Chrome, competitors train considerably less due to the intensity of their workouts. For both athletes and clients, Chrome personal training sessions are shorter — 30 to 45 minutes — and fast-paced. They'll lift heavy weights with little to no rest periods in between sets.

There's no such thing as a quick fix

No magic pill, shake or faddish diet is going to give you long-term, sustainable results. "You have to go in with the mentality that this is going to take some time. You have to be patient and consistent," Holloman says. "Quick fixes are a really good way to fall off [a regimen] because you might see great results for the first month, but then you're going to plateau and you're going to quit."

It's never too late to get fit

"There's literally no age limit," Holloman says. Or fitness level. You're never too out of shape or overweight to get started. "I believe anybody can do anything," she says. Bodybuilding competitors don't typically begin with a lean and chiseled physique, either; they have to build it over time. "To me, that's a big old excuse. You're giving yourself an out from looking and feeling how you want," she says. "If you want to accomplish something, you have to take the steps foward to do it."