No Fear in Love: Race focuses on healthy teen and young adult relationships 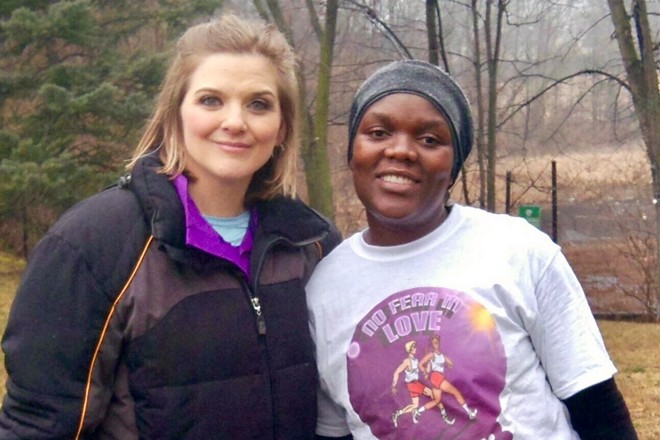 When looking at the best ways to combat domestic violence, Karen Bontrager says she found strong evidence that focusing on what makes a healthy relationship, not an unhealthy one, can help.

That's partly why she started the No Fear in Love race, now in its eighth year, to focus on talking especially with 16-24 year olds about valuing themselves and what it means to be in a healthy relationship. Youth in that age range are more likely to experience dating violence, and that can set a pattern for later relationships.

"I really believe we need to teach healthy relationships and model them," says Bontrager, 47, who survived a domestic violence relationship and is now a relationship counselor. "People should have classes about the science of the brain and the art of conflict."

The 6-mile race is scheduled to start at 6:29 am Saturday, March 2, at Gonzaga, as the organizers focus on the symbolism of coming out of the darkness into the light. After the race, between giving out prizes and having fun, participants are given the opportunity to talk in groups about what makes a healthy relationship, she says.

Bontrager prefers not to focus on her own experience, which is part of what inspired her to start the race, but notes, "I am a thriver over domestic violence because I’ve used what was meant to really destroy me as a great source and catalyst of my power." "It’s focused on the light, not the darkness, it’s focused on how to do the good in life," Bontrager says. "That’s why we start the race when the sun comes up."

For the first five years, the race was held on the East Coast, then Bontrager brought it with her to Cheney, where she studied social work, and then to Spokane, where it marks its second year here.

Those interested in joining can register for $27 at nofearinloverace.org up until the day of the race. Bontrager says if you register for two people, you can receive a small discount by entering the code LOVEMATTERS before Feb. 26.