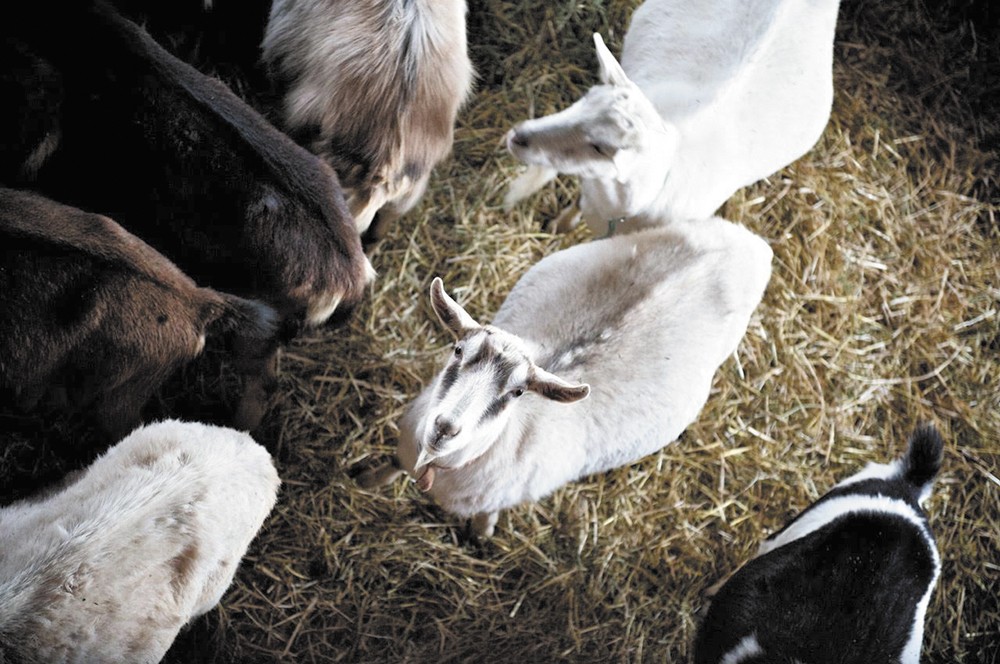 "The students who come to our farm

are always surprised how friendly and engaging the goats are," says Lora Lea Misterly, who owns Quillisascut Farm with her husband Rick. "They comment on how they seem like good companions, dog-like."

Located in Rice, Washington, Quillisascut is a working goat farm with two claims to fame. First, they produce goat cheese: the slightly sweet, pliable curado; tangy viejo, with the consistency of pecorino; and mild, crumbly farmer cheese. Second, Quillisascut is a leader in promoting responsible farming, receiving the national nonprofit Chef's Collaborative 2012 Sustainability Award. To that end, they offer classes for anyone — children, chefs, aspiring farmers — who is interested in food systems from field to fork, with topics ranging from caring for animals to cheesemaking to running your own farm.

"There is presently a lot of interest in goats as urban agriculture, and the DIY culture is growing," says Misterly, who provided this issue's recipe from a much-heralded cookbook produced on the farm that's been written up in publications as diverse as the Seattle Times, Condé Nast Traveler, Sunset magazine and Forbes.

Goat milk offers an alternative to both human and cow milk. It's low in lactose, is highly digestible and hypoallergenic, and facilitates both iron and calcium absorption. It's higher in protein than cow or human milk, yet lower in cholesterol.

Goat meat is healthy, too — generally lower in fat and cholesterol and higher in iron than chicken, beef, pork or lamb.

Goats are also easier on the environment than many other food animals, says Jim Jerow, who runs J J Goats in Davenport, Washington. For starters, "They're very frugal when it comes to drinking water." And they are not picky eaters. One cow/calf pair requires about 13 acres for grazing, explains Jerow. That same acreage can support eight goat families — a doe and two kids — that often clear vegetation other animals won't eat.

With those numbers, you'd think goat products would be more popular on the table. Frequently found in Mexican and Indian cooking, an unscientific search of local restaurant menus revealed just one chef serving goat meat with any regularity. Chef Adam Hegsted has served goat at the Wandering Table in various preparations, such as grilled with chimichurri, as a burger, and in a curry sauce. It's milder and more delicately flavored than lamb, he says, yet should be cooked similarly: "Braise or slow-roast tougher cuts; grill loins and chops."

Goats and sheep were both domesticated from a type of goat-antelope and are often counted as one category of the meat we eat. So even though goat farming worldwide has increased 20 percent since 1990, goat meat still accounts for less than 5 percent of overall meat consumption. (Pork ranks highest.) ♦

from Chefs on the Farm: Recipes and Inspiration from the Quillisascut Farm School of the Domestic Arts (Skipstone Books, 2008)

Kosher salt and pepper to taste

Preheat oven to 400 degrees. In a large bowl, toss the cut squash with olive oil, nutmeg, chili flakes, garlic and salt and pepper, and place single layer in cast-iron skillets or a roasting pan. Put skillets/pan in oven, bake for about 15 minutes until squash is softened and starting to brown. Stir in cooked garbanzo beans and return skillets/pan to the oven for about 15 minutes, until squash is caramelized and tender. While squash is still hot, drizzle with sherry vinegar, toss with pumpkin seeds. Allow squash to cool for 8 minutes, then toss with grated cheese. Adjust seasoning. Serve warm or at room temperature. Makes 6 to 8 servings as a side dish.