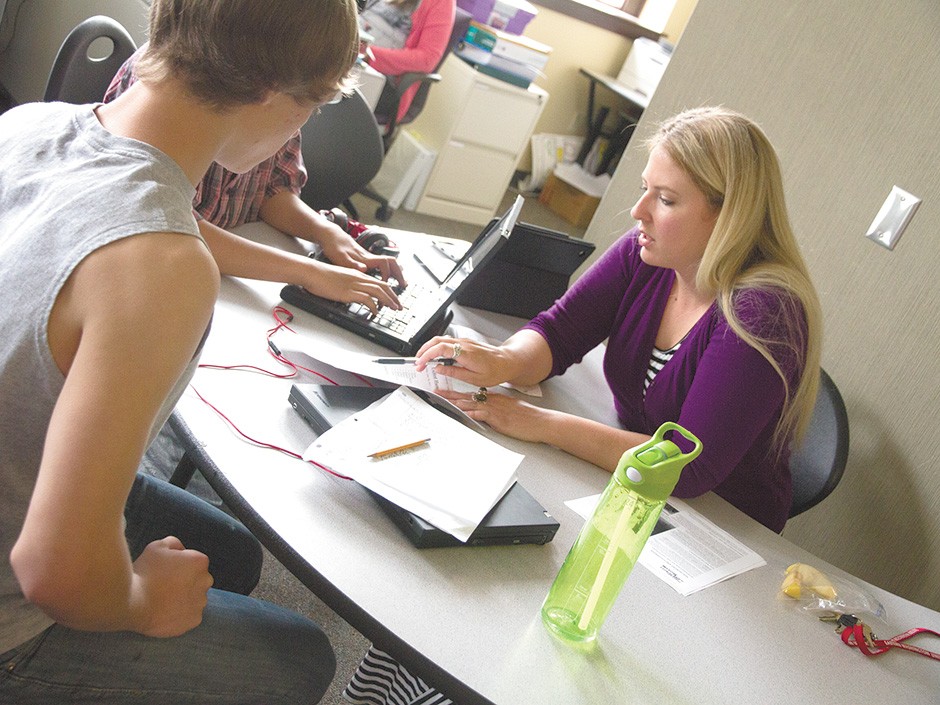 Jennifer DeBarros
Teacher Stephanie Robinette says many of her students have risen to the challenge of regular classrooms.

Nicole Kilgore, a teacher with long, wavy white hair, a nose ring and colorful flower tattoos on her arms, is at Rogers High School with an ambitious mission: She wants to kill traditional “special ed.”

It’s no simple task: Rogers’ 252 special ed students make up nearly a fifth of the entire school. Three-quarters of students at Rogers come from homes poor enough to qualify for free or reduced lunch, a correlation not lost on Kilgore.

“These kids are already starting out with a deficiency,” Kilgore says. “Our average student who has a learning disability reads at a fourth-grade reading level.”

To a certain degree, inclusion has been going on for decades. In 1975, the federal government told schools they should abide by a standard known today as “least-restrictive environment,” requiring schools, as much as appropriately possible, to mix disabled students in with nondisabled students.

“It came about because students with special needs were placed in these sad, basement classrooms,” says Daniela Fairchild, policy analyst with the Fordham Institute think tank. “[There were] all the horror stories from the ’70s.”

But “least-restrictive” leaves a lot of wiggle room. Since “special education” includes everything from mild autism to ADHD to kids who simply can’t yet read at grade level, placing them all in a general classroom isn’t an easy move.

Yet Rogers, the beneficiary of a three-year, $3.7 million federal grant, has the power to experiment. In March of last year, Kilgore and five others used some of that money to fly down to Sanger High School in Fresno, Calif. — a school a lot like Rogers, except for one thing: “Their state test scores were ridiculously high,” Kilgore says.

The group used what they learned to create a new model for special ed at Rogers. This year, through new “Career and Academic Progress” courses, students catch up on coursework, learn academic habits, practice social skills and figure out how to best transition from being a “special ed student” to just a “student.”

“Three and a half more days to get your grades up!” a dry-erase message on the whiteboard in a CAP class reads on a Friday. “You can do it!”

Stephanie Robinette, a young teacher, tutors students as they huddle around laptops and scrawl on worksheets.

“These kids have been told almost their whole career that they can only do so much,” says Robinette, “and I know that that’s not true.” One student, Michael Webb, says he started out hating reading — but by the end of the year he says he’d read five books, including Romeo and Juliet and To Kill a Mockingbird.

Special ed teachers like Robinette are assigned specific students, tracking them to make sure they don’t fail, drop out or slip through the cracks.

And since the number of resource courses has been cut in half, many special ed teachers have been placed in general classes as a sort of highly qualified teacher’s aide. They relearn the course material beside the special ed students, offering them additional tutoring and attention.

Naturally, there have been disagreements and personality clashes between some teachers, but science teacher Tyrone Hoard says the partnership has been invaluable. “You get some of those, you know, ADHD kids, and you’re just like, man, I don’t know how to work with them,” says Hoard. But the special ed teachers do.

In many cases, Hoard says, the students have surprised him. “Some of the kids are amazing, I would never have known they were special ed kids if I wasn’t told.”

Lori Shauvin, a special ed teacher at Rogers for 15 years, walks the halls with a brisk intensity.

“Do you want my truthful opinion?” Shauvin says when asked about the new inclusion model. “I think it’s a bunch of crap.”

Shauvin quickly tempers her criticism. The new CAP classes let her get to know students, she says, and special ed students at the fourth-grade reading level and above have excelled. “Don’t say I’m trashing,” she says. Still, she has serious worries.

“I’m looking at the kids I have,” Shauvin says, “and I’m thinking we should do what’s best for kids.” Some kids can barely read at a first-grade level, have never been in a regular class, but have suddenly been thrown into the deep end.

She has many concerns. She now feels she doesn’t have enough time to call parents and manage special ed cases. She worries special ed students are receiving passing grades when they shouldn’t be. And she thinks inclusion hurts students at both the top and the bottom. A class trying to balance lessons for such a range could leave special ed students struggling and overwhelmed, and brighter students unchallenged and frustrated. She believes other teachers have similar worries, but haven’t spoken up.

Nationally, the “inclusion” philosophy has seen pushback. “Now you’re seeing a lot of parents saying, ‘That’s great that my kid is in a classroom with Joey from down the block, but he’s not getting the reading services [he needs],” says Fairchild. There have been lawsuits.

Shauvin’s objections speak to a deeper philosophical debate: Should all students be taught high-level algebra and pushed to go to a four-year college? Or should some students be taught “functional math” — focused on useful skills like making change — and encouraged to learn trades? A New York Times article last week detailed a number of schools returning to “tracking” and “grouping” students by ability level within their classes, a practice that had fallen out favor in the ’90s.

“Most of my concerns are going to be addressed by next year,” Shauvin says. The transition from special ed to mainstream classes will be easier. And all of her special ed students will be placed in the same English and social studies core of classes, making it easier for her to keep track of them and their assignments.

It’s too early to tell if inclusion will have a real impact on test scores or graduation rates, but Kilgore says she’s seen amazing progress.

Kilgore remembers a parent calling, worried that her special ed son would struggle in mainstream classes. “He’s never taken regular ed classes,” Kilgore says. “He got a 4.0. These kids are capable — why are we not pushing for more?”