Could be fantastic. Just scale it down a little. 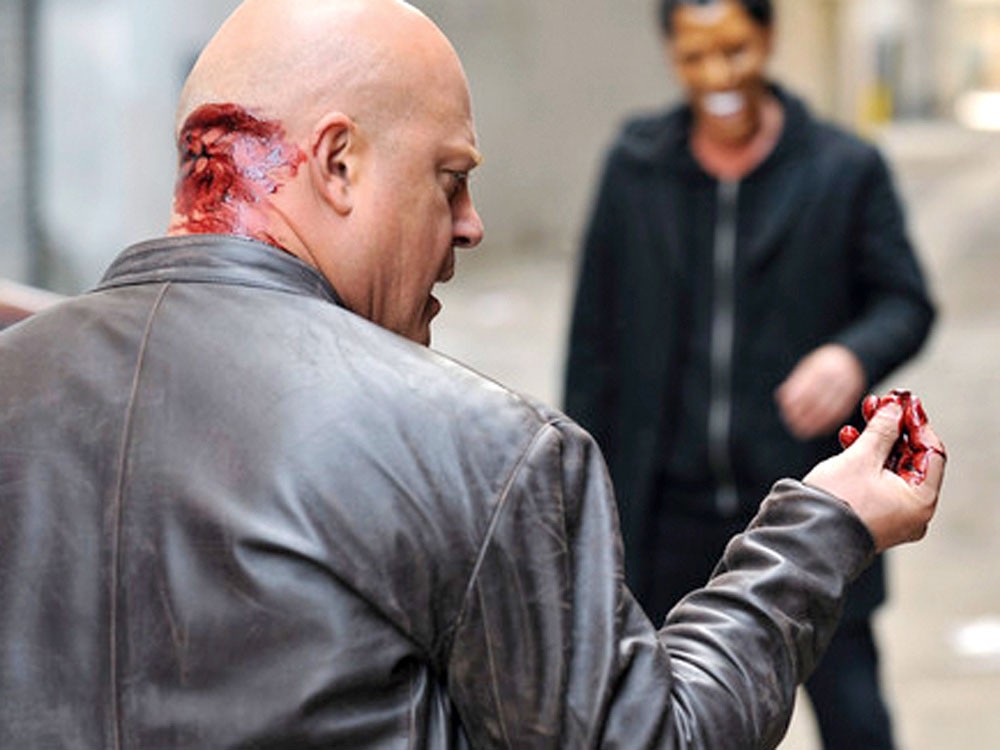 Getting shot in the back of the head, and other pet peeves of Michael Chiklis

Enough time has passed. You can admit it: Heroes was never a good show. Not really. It had one great episode (“Company Man”) before taking a sharp dive toward “horrific mess spiraling out of control.”

But critics raved about the first season because of one thing: The whole thing was oozing with so much potential. Everybody loves superheroes, and comic books lend themselves so easily to the Buffy the Vampire Slayer “monster-of-the-week and main-season villain” formula.

No Ordinary Family is a very different show than Heroes, thankfully.

Sure, they’re both stricken with the curse of needlessly expository voice-over narration. But where Heroes tried to be one of those dark Frank Miller blood-and-gravel ’90s comic books, No Ordinary Family goes more for the jaunty spirit of the 1950s comic books.

The story’s pretty superhero-ordinary: A plane crash in the Amazon endows a family with superpowers. Fittingly, each of the superpowers counters a personal insecurity.

Jim, the father (Michael Chiklis, The Shield) feels feeble and useless at work and around his family, so he receives super-strength. The mother, Stephanie (Julie Benz, Dexter), feels like she doesn’t have enough time, so she receives super-speed. The son, JJ, who feels dumb? Super-intelligence. The daughter, Daphne, who feels oblivious? Mind reading.

The long game is smart: Jim is bullet-resistant, but not bulletproof, ensuring he’s not so powerful that, like Superman or Neo, it saps the drama away. No Ordinary Family’s lighthearted nature makes it easier to sustain.

Better to start light and go dark, than start dark and go crazy.

But the cheesy nature of the show gives us some clunky expositional dialogue. “I’ve been racing around trying to be the perfect parent, the perfect spouse,” Stephanie says. “But you were extraordinary before you could ever catch a bullet.” What’s the point of having a character read minds if everyone says exactly what they feel?

Even more worrisome is the nod toward a tired cliché: “I don’t want new abilities! High school’s hard enough as it is,” Daphne says. The “it’s so hard being amazing” trope is overdone, obnoxious and, worse, boring. No Ordinary Family should go the other way: Gradually allow the kids’ new powers to change their personality and improve their social status.

No Ordinary Family could become a fantastic show. But first it needs to harness — and here one must imitate the show’s cheesy dialogue — the most important superpower of all: subtlety.

Mike and Molly
Do you have any dramatically overweight friends? Do you spend a substantial amount of time mercilessly mocking them for their general girth and copious flatulence? Do unseen forces bray loudly when your friends’ corpulent masses cause furniture to collapse? If so, then you’ll feel right at home watching Mike and Molly, the new comedy from the gentle soul who gave us Two and a Half Men. (Mondays, 9:30 pm, CBS)

Undercovers
Husband/wife caterer-spies (Boris Kodjoe and Gugu Mbatha-Raw) fulfill the obligatory spies-are-sexy quota. But the rest of the show is by-thebook bland, and the result is like the knockout date who spends the entire night talking about steel tariffs. (Wednesdays, 8 pm, NBC)