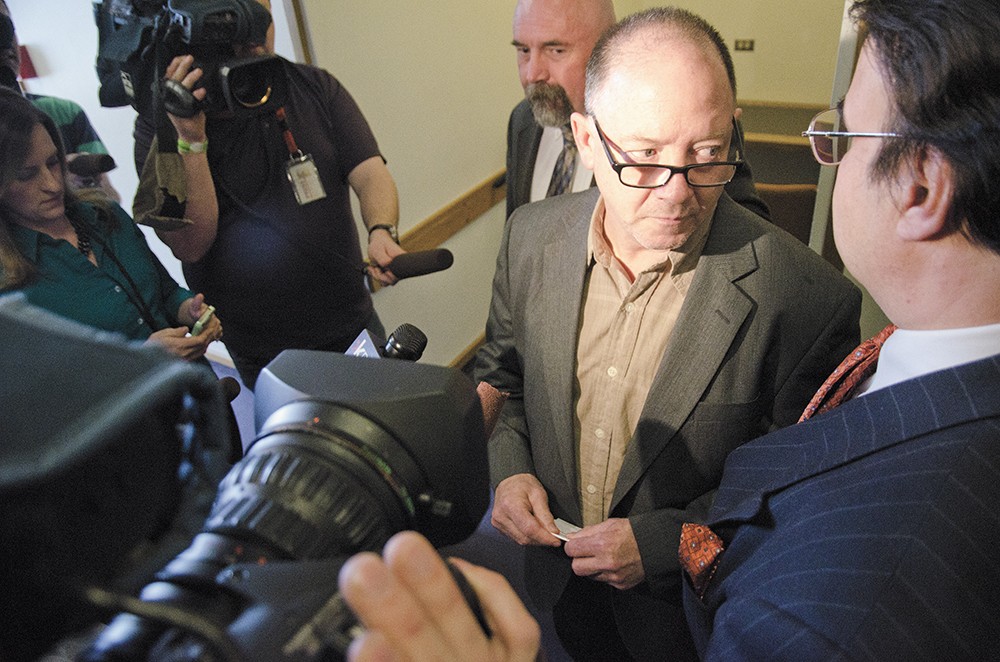 Sitting in the dark wooden box of the witness stand, Gail Gerlach levels an invisible pistol out across the crowded courtroom. He raises his right arm out straight, bracing it with his left hand, sighting down the sleeve of his charcoal sports coat as he continues his testimony.

"It's like a car wreck," he explains. "There's a lot of detail in a very short period of time."

As his stolen SUV pulled away on March 25, 2013, Gerlach chased after it, waving and shouting, he says, when the driver turned back and pointed something at him. Fearing he had seen a gun, Gerlach pulled his own 9mm Springfield XD pistol from a holster on his hip.

Gerlach, 57, says it took him one stride to draw the gun from beneath his shirt. With a second step, he cocks back the slide. Slamming to a stop, he raises the weapon and fires a single shot through the back window of the fleeing SUV.

He snaps his fingers: "Boom."

His bullet smashed out the SUV's rear window, drilled through the driver's seat headrest and struck 25-year-old Brendon Kaluza-Graham in the back of the skull — killing him. The blue-sky spring morning shattered, forever scarring two families, and splitting the Spokane community over how and when a citizen may lawfully take another's life.

A jury of 13 women (including two alternates) and one man listen dutifully on April 9, all eyes turned on Gerlach as he recounts the shooting. It no longer matters that Kaluza-Graham was never armed. Washington self-defense law hinges on how the "slayer" perceives any potential threat.

Gerlach's fate depends on his story, and how these particular jurors hear it. Do they see themselves in his shoes? Do they believe he feared for his life? Did he do what he had to do?

In the age of Trayvon Martin and "Stand Your Ground" laws, self-defense has come to mean many things. It's the last resort of an honest man, a convenient excuse for violent vigilantism, or likely something in between. Attorneys spent nearly two days selecting the Gerlach jury, culling dozens of potential jurors through hours of questioning. They asked jurors about justice and victimization. They asked about gun rights and the NRA. And repeatedly, they asked about frustrations regarding local property crime rates and how far one may go in self-defense.

More than many cases, the Gerlach charges leave room for jury interpretation. One juror may feel deadly force is only justifiable under the narrowest of circumstances while another, fed up with local crime, may believe any car thief deserves to be shot — regardless of the law.

As jurors prepared to deliberate last week on the manslaughter charges against Gerlach, Superior Court Judge Annette Plese urges them to separate personal feelings from the facts of the case and the letter of the law.

"You must not let your emotions overwhelm your rational thought process," she warns.

Legal analysts and armchair attorneys suspected the case would always come down to how the jury interpreted Gerlach's testimony. Did he really feel the fear he described or had he embellished his perception of the threat to excuse his anger and strengthen his legal cover?

"This is a case where it's all about jury selection," says ABC legal expert Dan Abrams in a recent segment. "It's going to be really hard to have found 12 jurors who are willing to put aside the fact that [Gerlach's] car was stolen and just look at this sort of in a vacuum, which makes this a much tougher case for prosecutors."

Dave Workman, a former member of the NRA Board of Directors and self-defense instructor now writing about Northwest gun issues, tells the Inlander the case not only divided Spokane residents, but many regional gun owners. Following news reports and online discussions, Workman found people both celebrating and condemning the shooting.

"There's a lot of support for what he did ... and not a lot of sympathy for [Kaluza-Graham]," Workman says. "[But] the gun community was never of a single mind on this case. ... This is the kind of thing we all hope we never have to face."

The jury took just four hours to return a unanimous verdict last Thursday. They found Gerlach not guilty on all counts. In a special verdict, they decided 10-2 the shooting was "justified," allowing his attorneys to seek reimbursement from the state for close to $300,000 in legal costs.

While both Washington and Idaho do not have explicit "Stand Your Ground" statutes, case law has established nearly identical standards for the use of deadly force. Jury instructions for both states include the right to "stand one's ground" without any "duty to retreat" from a perceived threat of imminent danger. Laws give the surviving slayer significant leeway in defining what he or she considered to be a threat at the time.

In the acquittal of George Zimmerman last summer in the Martin shooting, jurors later indicated that Florida state law left them little choice. Meanwhile, a juror in the Gerlach case says the group collectively agreed not to speak with the media regarding its decision. Its reasons remain unknown.

Friends and family of both Gerlach and Kaluza-Graham pack the pews of the courtroom last Thursday as the verdict comes down. The presiding juror, the only man on the jury, hands up its decision and Judge Plese announces the final "not guilty" verdict.

Gerlach's attorneys pat him on the shoulders triumphantly. A sharp inhale sounds from the row representing Kaluza-Graham's family as supporters on both sides break into tears. Gerlach turns to embrace his wife and accept a barrage of congratulatory handshakes. Stepping out of the courtroom into the glow of TV cameras, he reads a short statement.

"This was a tragedy," he says. "As Christians, we believe in redemption. The greatest tragedy is that Mr. Brendon Kaluza-Graham will not have a chance to turn his life around. We give our condolences."

The family of Kaluza-Graham ducks past, red-eyed and weary. Turning to the cameras, defense attorney David Stevens acknowledges the heavy toll the case has taken on both the families and the community.

"This has been a terrible thing," he says, "for not only [the Gerlachs], but for Kaluza-Graham's family as well. There are no winners here." ♦