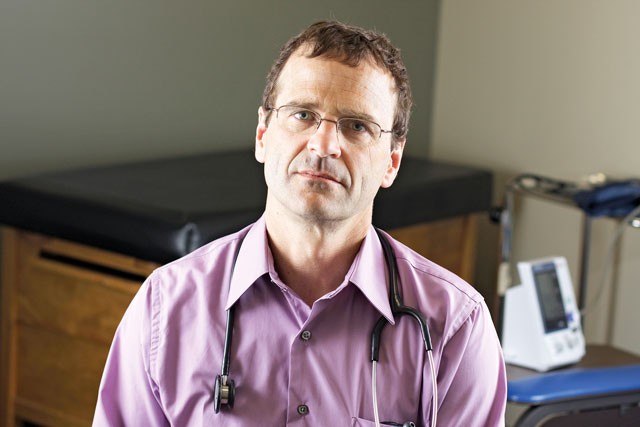 Getting patients to take your advice is one of the toughest parts of medicine, says Dr. John McCarthy. "It's very hard to change behaviors that are ingrained from childhood."

As a family care physician, Dr. John McCarthy will, over the course of visits during your life, tell you a few words you don’t want to hear.

You probably shouldn’t go tanning. You’re overweight. You should eat vegetables, exercise more. Oh, and you should take these pills every six hours.

And yet, on your next visit to Dr. McCarthy again, you haven’t done any of it.

Doctors, dieticians and dentists all give pretty effective advice. And they all can get a little frustrated when you ignore it. A 1987 study in Social Science and Medicine found that, for a majority of the sample, patient non-compliance not only frustrated doctors, it had the potential to become an “ego-threatening event” event for them. It takes a particularly skilled doctor, the study says, to find creative ways to convince the non-compliant patient to take advice instead of simply getting defensive.

Then again, being healthy is hard.

“If it was easy, people would jump on it,” McCarthy says. “We have fast-food advertising hitting us right and left, we have food available all over the place. We’ve built cities designed for automobiles, not bikes and pedestrians. People in poverty can get a lot of cheap but fattening foods readily … [And] it’s very hard to change behaviors that are ingrained from childhood.”

Persuading patients to take their medication, too, can be a challenge. McCarthy gives the example of certain hypertension medications. For some, there are significant side effects — “You can lose erectile function,” McCarthy says. So some will simply stop taking their meds. Hypertension doesn’t hurt — it just kills you, after a while.

Doctors continually have to figure out ways to encourage patients to talk about problems with their medications instead of just abandoning the treatment, McCarthy says.

Then there’s another problem not widely discussed — patients lie. Frankly, it’s a little embarrassing to tell your doctor that yes, you’re still drinking and you haven’t exactly changed you diet or started exercising. McCarthy suspects patient non-compliance has become a little worse over the years. With the abundance of sometimes contradictory medical advice from a variety of sources, doctors’ voices can carry a little less gravitas.

In the end, it simply comes down to patient education and establishing trust — something that can’t be done in the emergency room.

“If I’ve seen this patient for 10 years … They trust me. At times they’ll trust me with their life,” McCarthy says. “Emergency rooms, you don’t have that relationship. A friend is going to be someone you’re going to listen to more readily than someone you met for seven minutes.”

Patient non-compliance is not a simple phenomenon,” says John-Henry Pfifferling. “The simplest intervention is having health educators in your office who are specialists on communication.” These specialists often have advanced degrees in health education. “You can also take your staff and they can develop sub-specialities in patient compliance.”

Patients who receive written instructions may be more likely to comply because the load of information at a doctor visit can overwhelm many people. “If you’ve just told me I’ve got pancreatic cancer, I’m not going to hear the rest of the conversation,” Pfifferling says.

Similarly, encouraging patients to have someone accompany them can be very helpful. “My mother goes to the doctor, and I go with her,” says Pfifferling. He listens for the details. “She’s just so happy they were nice to her,” he laughs.

And then there’s the follow-up call. “No one’s going to pay for that — but it is good medicine,” says Pfifferling. For some conditions, it may just be a pleasantry; there are other areas where it is “incredibly important.”

While there may be no direct compensation for the follow-up call, it might just pay off in the long run. Enhanced communication may reduce the risk that a patient will sue the doctor. “The better the communication,” Pfifferling says, “the better the relationship.”

Shadowfax is a ER doc and administrator in the Pacific Northwest who blogs anonymously about the emotional challenges of his work.

There are patients for whom it’s easy to feel compassion — the children, the dying, the innocent victims of some terrible disease, the ones in acute pain from some accident or sudden illness. They’re suffering, and since it’s not their fault we don’t judge them, but simply feel for them.

But the guy with chronic obstructive pulmonary disease who refuses to stop smoking? The unemployed mom whose teeth are rotten and can’t afford a dentist (though she does have a cell phone and cigarettes)? The fat guy with diabetes, hypertension and a stroke as a result? The chronic migraineur whom everyone suspects is just addicted to narcotics? How much compassion do they get? How much do we judge them and find them wanting? It’s difficult to muster the emotional energy to get past the self-inflicted elements of their illnesses, and it’s so easy to slip into contempt for their weakness and frailties.

I see it in my co-workers, and I am as guilty as any of them. And I see it in the writings of my emergency department colleagues in the medical blogs and comments. On the Net, behind the veil of anonymity, people are more willing to express their darker sides, and the intensity of the contempt and the venom directed toward our patients can be disturbing.

The question is how we avoid falling into the trap of judgment and contempt. … What if you could identify with him? What if you were him, or he was a close relative? I see these poor souls and I remember that once they were 7 years old, like my older son, with their whole lives were ahead of them, full of promise. And I try to see them as they were when they were 7. That works for me, but your mileage may vary. I also try to remember that my children’s lives could easily go wrong and if any of them are someday in the ER, broken and suffering, someone will remember that I loved them and treat them with compassion.

More humbling, I try to remember that physicians are prone to substance abuse, and that I have seen former professionals in the ER, victims of their own self-destruction, and I think, “There but for the grace of God go I.”