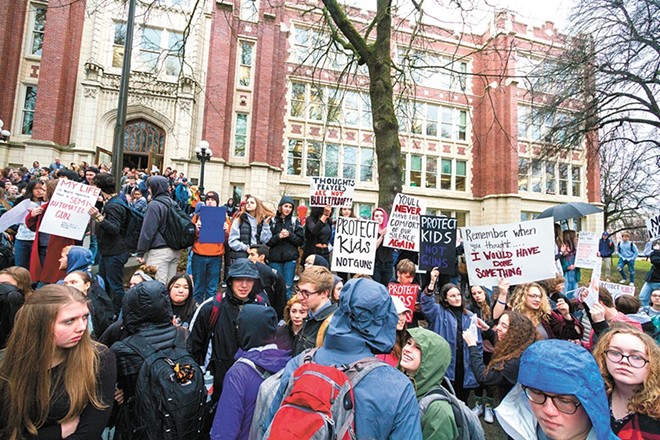 A Lewis and Clark High School student will face felony charges for comments he allegedly made online threatening a school shooting, which prompted more than half of LC students to miss a day of class last week.

Out of around 1,700 students, 982 missed school last Wednesday, with students fearing a potential school shooting. Later that day, the student was detained in connection with the threats made on social media.

Spokane Public Schools spokesman Kevin Morrison says it was one of several school shooting threats this school year. North Central, Shadle and Rogers high schools all had threats against the school at one point. None of them, including the recent threat against LC, were credible, he says. The students did not have the means or the ability to carry the threats out.

"I think some people question — when we say it's not credible — how do we know? There is a myriad of things we may know that we cannot release because of [federal privacy laws] or because of police investigations," Morrison says. "But we don't come to those conclusions lightly."

The missed class by LC students was the strongest reaction to any school threat in Spokane Public Schools yet this year, says Morrison. In previous cases at other high schools, he says, attendance remained normal. Morrison says the district is at a loss in its attempt to understand why the reaction to the most recent school threat prompted a stronger response. He did point out, however, that parents are worried in the wake of other school shootings.

In each threat toward a Spokane high school this school year, Morrison adds, the student was arrested and "appropriately disciplined."

The student who allegedly made threats against LC is an adult, according to Spokane police. The student will be taken into custody on charges of felony harassment and communication with a minor for immoral purposes once he's finished receiving medical care, police say.