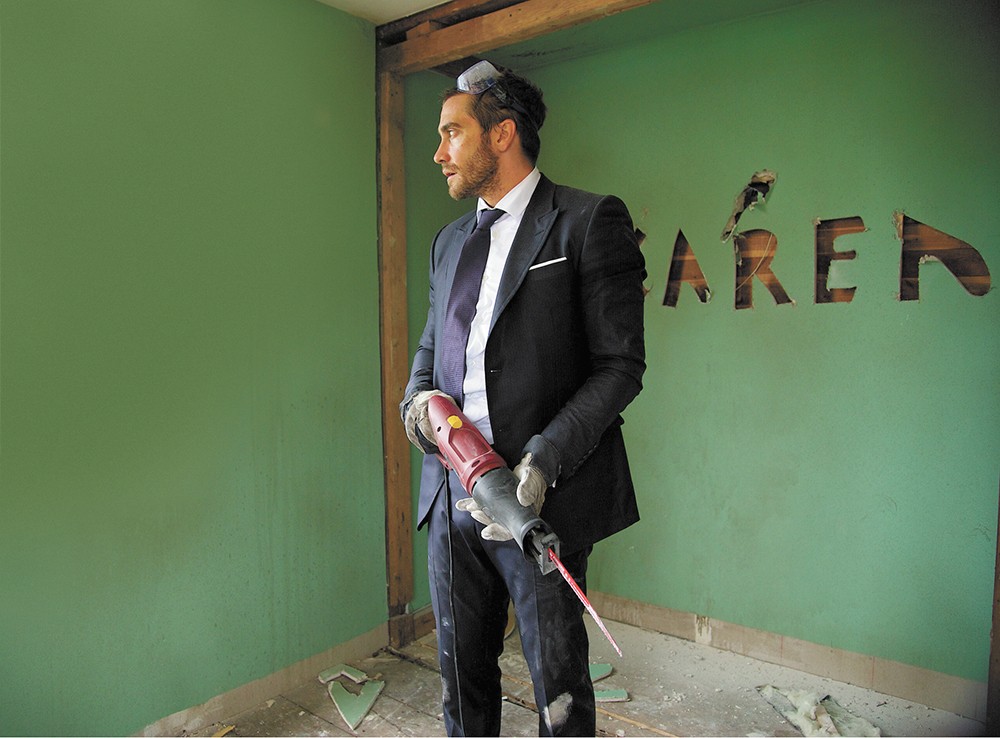 A tale of unprocessed grief that misses its mark.
in some movies — a moment that any real movie-lover hopes never to have — that I will refer to henceforth as The Moment of Nope. It can be large or small, early or late, part of a performance or part of the plot, but it's hard to miss when it happens. In short, it's a moment when a story simply loses you, irretrievably, so that you're never able to reconnect with what's happening on that screen. Authenticity vanishes, and all you're left with as a viewer is a big "Nope. Nope nope nope nope nope. NOPE."

Any one of a dozen individual culprits could be tabbed as Demolition's Moment of Nope; it's a script so steeped in writerly contrivance that its cumulative emotional honesty could be contained in a tweet. The most obvious point would be the one that sets the major portion of the plot in motion. It occurs when Davis Mitchell (Jake Gyllenhaal) — a New York investment banker whose wife has just died in a car accident — responds to his bag of M&Ms getting stuck in a hospital vending machine by writing several letters of complaint to the vending machine company, and including in those letters the story of his marriage.

Demolition is at its core a tale of unprocessed grief, one that sends Davis on an increasingly erratic course that causes his father-in-law/boss (Chris Cooper) great agitation. Some people out there — screenwriter Bryan Sipe apparently among them — would find it plausible that someone as emotionally stunted as Davis might take to an anonymous missive like this as a way to communicate to someone that he isn't feeling what a person is supposed to feel when his wife dies.

But the larger problem is that the letters serve mostly as a plot device to connect Davis with Karen Moreno (Naomi Watts), the customer service representative at the vending machine company. She is touched, Sleepless in Seattle style, by the awareness that this wounded guy is out there, and secretly begins stalking him. This easily could serve as another Moment of Nope, especially since Demolition offers next to no information about Karen's life to explain this behavior — nor her frequent marijuana usage, nor her subsequent insistence that her friendship with Davis must remain chaste — except that she's raising a troubled teen (Judah Lewis) as a single mother. Hey, sometimes a girl just has to pull on a knit cap and follow a stranger through the streets of Manhattan.

The bottom line is that pretty much nothing that any of the characters in Demolition does represents actual human behavior in a way that might make the story resonate. Gyllenhaal's performance feels lost in all the increasingly ridiculous things Davis does as he wanders through his not-exactly-grieving: he impulsively asks the workers at a construction site to let him help demolish a house they're working on; he bounces conspicuously around the city to the beat of the music on his headphones; he takes Karen's son out into the woods and lets the kid shoot at him while he wears a Kevlar vest.

"Everything has become a metaphor," Davis writes at one point, but it winds up feeling like a screenwriter's desperate attempt to justify a story that is nothing but metaphor, without a single genuine-seeming emotion amid all the "nope."

The insufferability meter leaps into the red as Demolition heads towards its climax, including director Jean-Mark Vallée's (Dallas Buyers Club) operatic staging of a crisis event that feels exploitative and unearned. It's certainly an artistic challenge to try to convey someone not feeling something, but Demolition responds to that challenge simply by having its characters do stuff, any stuff — like plowing a backhoe through a living room wall — even if it's only tenuously connected to the way you've ever seen any person you've ever known react to anything. The roles are showy, so actors love to play them. The audience, meanwhile, is stuck waiting around for the inevitable epiphanies, or whatever will happen that might get Davis finally to feel. Nearly two hours is a long time to wait for some hope, especially after a narrative so full of nope. ♦

Demolition is not showing in any theaters in the area.