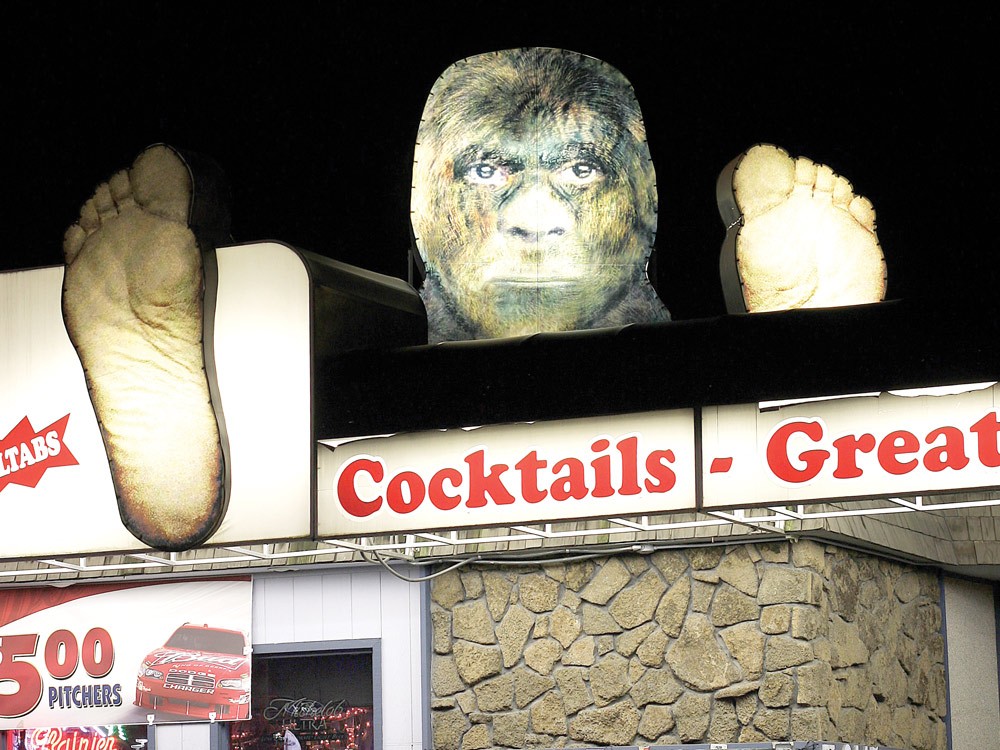 Young Kwak
Find your inner sasquatch at the Bigfoot pub.

Division Street is like Spokane’s zipper, threading up the center of the city and holding the two sides together. But while many may see it as merely a route to somewhere else, when that zipper gets pulled down a bit, there is some fun to be had in the forest of the street’s allegedly-record-setting number of Chinese restaurants, the strip-mall bars, laser tag places, fast-food establishments, pulltab dens and hardy eateries.

Sure, Division isn’t necessarily a “neighborhood,” so to speak, given that, in terms of nightlife, it begins downtown and ends in the north end’s unincorporated suburban sprawl, but if you’re heading out, it might as well be.

A recent Friday night finds us, upon several recommendations, at the Bigfoot Pub & Eatery (9115 N. Division St.). The place is filling up and on a corner stage, a trio called Phoenix is playing “Mustang Sally” with unexpected precision. A man enters, flipping back the hood of his jacket to reveal that he’s wearing headphones, cranking out some sort of hip-hop despite the fact that Phoenix is providing live entertainment on the other side of the room.

“A shot of Fireball and a shot of Jaeger,” he says to the bartender.

She arrives with both, inquiring as to who the other one is for.

“They’re both for me,” he replies, slapping down a $20 on the bar as he fires back the Jaeger.

He slams the Fireball minutes later, motions for the bartender, then he slips her a few ones like he’s Richard Gere and she’s Julia Roberts. The jacket hood comes back up and, as mysteriously as he arrived, he’s gone.

“We get a lot of older people. Right now, we’ve got 70 students from Gonzaga out there,” he says pointing out at the massive disco-ball-lit rink that’s tucked just one block off of Division.

“I think a lot of people come here to reminisce. We do the couples skate and all that, and we’ve got a popular retro night on Sundays,” he says, adding that it’s an alternative for those bored of the bar scene.

Suddenly, an employee arrives and tells Pattison that someone just hurt her arm. He sprints away and we head back onto Division, inquiring about mini golf at Wonderland (10515 N. Division St.) before settling in to O’Doherty’s Irish Grille (10208 N. Division St.), a strip-mall satellite of the downtown stalwart, where we sacrilegiously forgo a Guinness for a Boundary Bay IPA, then make up for it with a Reuben.

A few red lights and drop-ins later, we make one of the only swooping turns needed all night and enter The Cathay Inn, just to get that Division Street Chinese restaurant cliché out of our systems. The bar tends to be full on a weekend night, but if you wait, you can sit at one of the swiveling cockpit-like seats across from the beer taps as you order from a semi-secret bar-top menu of affordable Asian favorites (any three for 10 bucks). And yes, like most establishments on Division, they have pulltabs.

Not to stereotype or anything.

If you’re thirsty and see Flamin’ Joe’s (7015 N. Division St.) fire-emblazoned sign alongside an otherwise mundane stretch of Division, stop immediately. The barbecue-and-hot-wings joint is an unsuspectingly excellent place to find a thorough selection of microbrews, like the rare fresh-hop Mirror Pond Pale Ale that was pouring on a recent Friday night. Really thirsty? They have 24-ounce cans of PBR, too.

A near replica of the famed downtown eatery of the same name, The Onion (7522 N. Divison St.) on the north side is similarly famous in its part of town. The sign is neon. The burgers are huge. The beers cold. And the mozzarella sticks are a perfect soak-up-those-Jaeger-shots snack. They’re open until midnight, too.

Oh yeah, girl. You know how this goes. You and your man are heading back down Division after a night of karaoke, fast food and rollerskating when you realize you want to get weird tonight. Thankfully, within a block of each other you’ll find, Adam and Eve (3609 N. Division St.) and Lovers (3411 N. Division St.). Both of these places sell lingerie, adult videos, and, you know, other stuff. Get weird, girl.

...WORK ON YOUR SHORT GAME WITH A SHORTY

Apparently, there’s this thing called “dating.” It’s kind of like Facebook chatting, but you do it in person with people who you find romantically engaging. It’s supposed to be wild. If you experiment with this medium, think about hitting Wonderland Family Fun Center (10515 N. Division St.). They don’t have a bar, sure, but they do have an awesome indoor/outdoor mini-golf course, which is better than a bar.

...DRINK A TALL CAN IN THE SHADOW OF KEN GRIFFEY, JR.

No, the Greatest Baseball Player of All Time does not hang out at Birdy’s Sports Bar (12908 N. Highway 395), but his signed jersey does. This clean and classy sports bar, located in Division’s most northern strip mall, has a full bar and 15 tap selections, but there’s no shame in ordering a Rainier tall boy for a mere $2 while you watch the game.