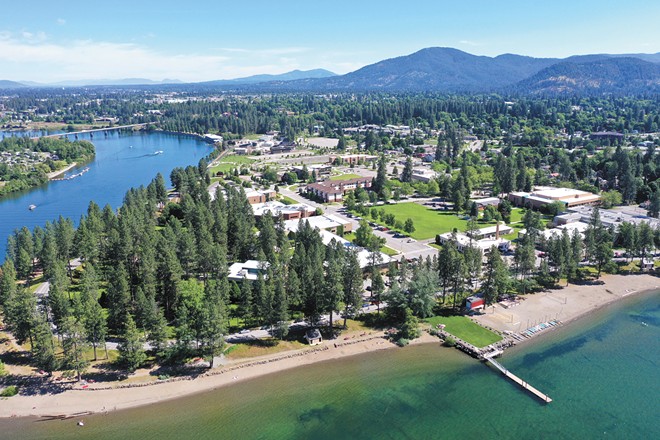 In North Idaho, where the delta variant is ravaging the community and the regional hospital is overflowing with severe COVID-19 patients, masks are a relatively rare sight.

There is no state or regional mask mandate in place. Children in Coeur d'Alene are returning to public schools with no face coverings, no contact tracing and no quarantine protocol.

In the name of individual freedom, government agencies at all levels have declined to impose any measure that could prevent the deadly virus from running free.

North Idaho College, then, was a notable outlier when it announced last month that it would begin the school year with an indoor mask mandate.

"While not the least bit desirable, we know, based on information from state and local health experts, that wearing face coverings improves our chances of being able to stay open this fall," the college's president, Rick MacLennan, wrote to campus.

Just four days into the semester, however, the board of trustees voted 3-2 to rescind the mask mandate. The board's new majority, which gained control in the November 2020 election by riding a wave of right-wing distrust of higher education, took advantage of a new Idaho law that appears to give elected trustee members the authority to dictate operational decisions in response to the pandemic — an authority that previously was held by the college president.

And now, MacLennan's future at the college may be in jeopardy, as the board won't renew his contract and keeps delaying an ominous discussion of MacLennan's employment.

The situation is a shining example of the steep challenges school leaders in deeply conservative areas like North Idaho face in trying to take measures against the delta variant. But at North Idaho College, it's just the latest episode in a tumultuous power struggle between the board's far-right majority, led by board chair Todd Banducci, and the public community college's president, MacLennan.

Longtime trustee Christie Wood — who supports MacLennan — suspects the board majority may fire him.

"It's just complete chaos," says Wood, one of two trustee members who support MacLennan. "There's no sense of good governance going on whatsoever."

For MacLennan, the board taking authority over the college's COVID-19 decisions doesn't come as a huge surprise.

Banducci, a longtime trustee, was appointed board chair as soon as two newcomers, Michael Barnes and Greg McKenzie, won seats. Both are members of Kootenai County's Republican Central Committee, but had little experience in education; Barnes worked in computer security, and McKenzie is a research engineer. They beat out candidates with extensive experience in education.

Immediately, Banducci indicated to MacLennan that he intended to change COVID-19 operating decisions, according to an email MacLennan wrote to the full board in January, reported on by the Coeur d'Alene Press. The college, at the time, had a mask mandate in place.

When MacLennan explained that he as president has authority to make operating decisions, Banducci said, "the board only has one employee — I guess we can go down that road," according to an email MacLennan wrote to the board.

"I understand this to mean that he would seek to terminate my employment if I did not cooperate with him," MacLennan wrote.

The email contained other accusations against Banducci: that MacLennan witnessed Banducci assault a female employee, and that Banducci was "disparaging" MacLennan's wife as a Hillary Clinton supporter. Wood, seeing the email, called for Banducci to resign.

Banducci did not respond to a message seeking comment for this article.

Eventually, the conflict played a role in local human rights task force boards filing a complaint with the Northwest Commission on Colleges and Universities, bringing the college's accreditation eligibility into question. If NIC were to lose accreditation, it could lose federal funding, students may not be able to keep credits when they transfer to another institution, and the college may be unable to offer certain courses.

But on campus, MacLennan says things were going well, considering they were holding in-person classes during a pandemic. He says he's only aware of one case of COVID transmission that occurred at the college last year — and he credits mask buy-in for the success.

"Overall, our students, our faculty and our staff 100 percent bought into this idea that it was a tool we had to get us back to normal as soon as we possibly could," MacLennan tells the Inlander. "I could not be more proud of what this college community did to get us through that."

As the new school year approached this summer, he'd initially hoped that with three-quarters of faculty and staff vaccinated, masks wouldn't be necessary.

The delta variant upended that idea. The local hospital, Kootenai Health, was being hit with a surge in patients and grew concerned that it would soon be unable to provide care for everyone who needed it. Several days before classes began, MacLennan wrote the letter to campus, mandating mask wearing for at least two weeks in campus buildings with multiple people there.

That set the stage for the heated board of trustees meeting on Aug. 26. By then, Banducci, McKenzie and Barnes felt they had the law on their side to seize control of COVID-19 decisions. That's because the state Legislature earlier in the year passed a law calling for college boards to adopt a policy for measures and procedures "to prevent the spread of contagious or infectious disease." Once adopted, the board — not the administration — has the authority to implement shutdowns or other measures to prevent disease spread.

MacLennan and trustees Wood and Ken Howard tried to stop them from shifting COVID authority and rescinding the mandate by arguing that the board had not gone through proper procedure, that the board's action had not been legally vetted and that the board may have violated open public meetings laws.

The policy hadn't gone through a draft process, and it was precisely the kind of problem that the Northwest Commission on Colleges and Universities would consider a governance issue, risking accreditation, MacLennan argued.

It passed on the votes of Banducci, Barnes and McKenzie anyway.

As McKenzie would say during the meeting, it was not just a debate about mask efficacy.

"This is a debate about who gets final say," he said.

Days later, the board had another meeting. This time, the agenda included an action item titled "President's employment." Howard and Wood successfully pushed the item until the next meeting, Sept. 22, but Wood guesses Banducci wants to fire MacLennan. If so, she thinks it's at least in part due to the email back in January.

"Here we are, 10 months later, with it looking like this board, led by this chair, wants to take some sort of action against this president," Wood says.

Rescinding the mask mandate is a decision that health professionals in Kootenai County strongly oppose.


Throughout the entire mask debate at North Idaho College, the COVID-19 situation has only gotten worse at Kootenai Health. One of 20 Department of Defense medical response teams in the nation is being deployed to North Idaho to help handle the surge in patients. This week, Idaho activated "crisis standards of care" at Kootenai Health, warning that the the hospital may not be able to provide patients care they'd normally expect due to all the hospitalized COVID patients.

An open letter signed by 140 medical professionals, printed in the Coeur d'Alene Press, describes a hospital in crisis. The letter asked both the boards for North Idaho College and Coeur d'Alene Public Schools to take steps to make campuses safer.

One of those steps: universal masking.

"It is simply the most important thing we can do right now to ensure our schools and colleges are safe and remain open," the letter says.

The argument that Banducci, McKenzie and Barnes presented against the mask mandate is one that's become standard in conservative circles: People can wear masks if they want, but it's a personal choice.

Barnes is against any government entity mandating masks, even though he had COVID last October and is "still dealing with the aftereffects." McKenzie said he'd heard from students who would drop out if the mask mandate was in place because they apparently had a medical condition preventing them from wearing one. He said rescinding the mask mandate was about "equity" for those students.

Banducci insisted that he does, in fact, want what's best for students and faculty.

"I would hope we would not shame someone for their personal choice, whatever their decision," he said.

The problem is that research shows cloth masks don't protect an individual as much as they protect people around them. In that sense, the personal choice becomes less personal. Molly Michaud, chair of the faculty assembly at North Idaho College, says she's noticed many students and faculty on campus opting out of wearing a mask since the mandate was rescinded.

And just as medical experts are against the board rescinding the mask mandate, the faculty at the college would oppose an ouster of MacLennan. Michaud says the faculty assembly unanimously passed a resolution in support of him last month.

"The college has been very successful during his tenure," she says. "I'm concerned about the student experience and the employee morale."

That support was shown during the public meeting last month. The crowd of college employees raucously cheered at various points when MacLennan spoke in opposition of Banducci, McKenzie and Barnes — and the three trustees were visibly frustrated about it. McKenzie tried to silence the cheers against them at one point by shouting, "I got work to do after this still!"

Banducci, meanwhile, repeatedly pointed out that those in the crowd cheering — often faculty and staff — were not the people who voted for him.

It came to a boiling point when MacLennan asked to read a letter from Kootenai Health urging universal masking. As he started reading, Banducci interrupted, trying to stop it from being read and questioning the motive of Kootenai Health.

An audience member asked for the letter to be read. Banducci fired back at the room.

"If you voted for me, raise your hand," Banducci said. "Because I bet there won't be anyone here." ♦