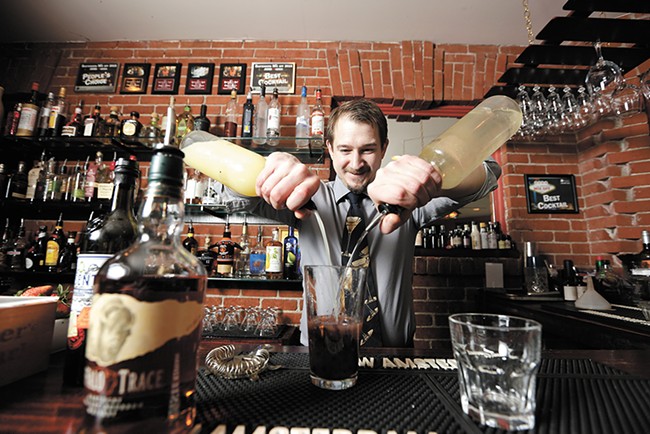 Despite the name, martinis are only a sliver

of what mixologist Ryan Roberge is asked to make at 315 Martinis and Tapas. Sure, he serves wine and beer, but what he makes the most of are cocktails, especially the classics.

"If you really want to get good at something, learn the basics first," says Roberge, who has 13 years under his bartender's belt, more than seven of them at 315.

Ask him for an Old Fashioned and he'll use house-made bitters and 315's own brandied cherries. He can wax rhapsodic over the unusual Absinthe of Reason, which contains not only the titillating absinthe, but also an egg white. Several trays of fresh produce and herbs await muddling, from the basil in their Basil Briar to the strawberries in their La Fresa Picante. Of course, Roberge can also make a martini that would satisfy James Bond.

And if it's something custom you want, Roberge is happy to oblige there too. Although he's competed in flare competitions — picture the bartenders in the movie Cocktail — he's really focused on understanding bartending and alcohol better. That, he says, has enabled him to take his knowledge of the basics and experiment. A lot.

With three bartenders on staff, 315 can afford to participate in competitions, which not only give their bartenders an opportunity to strut their stuff, but also brings some panache to the restaurant.

As numerous plaques and trophies attest, 315 has indeed garnered plenty of awards, most recently at the Bartender's Mixoff, where Roberge and his co-workers earned People's Choice and Judge's Choice.

There's more to bartending than alcohol, however, which is something bar manager Mike Irby commends Roberge on.

"He's got the best memory for drinks and names and faces," says Irby.

Roberge demurs, saying that meeting people and talking with them is one of the best parts of the job.

"It's taught me to listen better," he says.