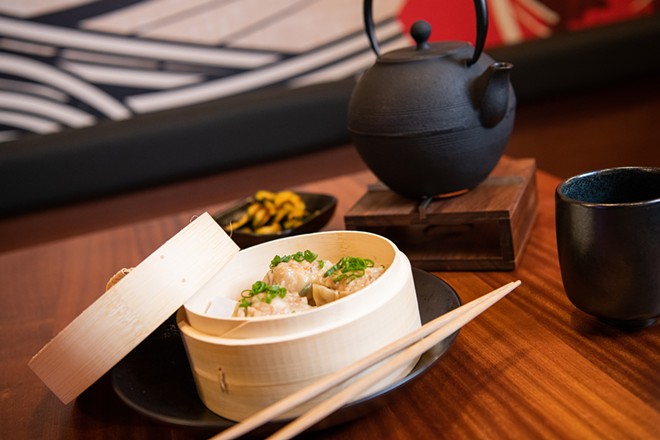 Michael Miho, assistant director of food and beverage, explains how he and Northern Quest General Manager Nick Pierre went to dinner at one of Pierre's favorite restaurants, Momofuku Las Vegas.

For anyone unfamiliar, the Momofuku brand emphasizes innovation, impeccable presentation and service, with a contemporary vibe. Created by world-class chef, restaurateur and media personality David Chang, Momofuku restaurants have earned industry-wide applause, including two Michelin stars, the equivalent of an Emmy and an Oscar in the culinary world.

"[Pierre] said, 'This is the vision for Northern Quest. I want to bring this to Spokane,'" Miho recalls.

Adjacent to East, for example, Neon Pizza is slated to fire up in June, and Highball speakeasy arrives in the fall, with additional revisions to other venues including EPIC Sports Bar, Riverbank Taphouse and Masselow's rolling out over the next year or so.

East channels some of Momofuku's vibe in its overall look, with boldly patterned wallpaper like the red koi or earth-toned underwater scene in one of two tatami rooms. Dark sapele wood seating, table tops and black cushions add aesthetic gravity. Adding contrasting whimsy is a wall of 600 or so stacked, white ceramic "waving cat" sculptures, or maneki-neko in Japanese, that partitions the main dining room.

"The concept was to bring a more playful energy to a traditional Japanese palette," says the project's architect, Michael Mannhard, from the local firm HDG.

The ambitious plan for East required rethinking an existing dining venue, Fai's Noodle House, which offered Chinese, Thai and Vietnamese-inspired dishes. Although Fai's is now closed, some of its dishes have been revamped for East's menu, like honey walnut shrimp ($18), beef and broccoli ($18), and wonton noodle soup ($14).

More Fai's faves might be included on East's express menu, which is slated to open on the casino floor later this year. But East also goes deeper into pan-Asian cuisine than Fai's.

The ramen ($14), for example, is Tokyo style, with wide noodles and a roasted pork-based broth, while one of the six grilled skewer options ($9) is the Japanese version of Berkshire pork known as kurobuta. Shrimp chips ($4) are a popular Japanese snack, similar in texture to Mexican chicharróns or pork rinds.

Korea is represented on East's menu with kimchi pork fried rice ($9) and a Korean chili-infused dressing on quick-pickled vegetables ($4).

In addition to shaved ice ($5) with house-made syrup, Hawaiian foods on the menu include a poke-style salad ($14) with ahi tuna and avocado, and seasonal fresh fruit ($6) served with haupia, Hawaiian coconut pudding.

The pepper beef lumpia ($10) has ties to Filipino and Indonesian culture, and is a variation on the ubiquitous Asian spring roll.

The drink menu features both domestic and imported beer and wine, plus a few canned cocktails, a few whisky options and seven sakes to choose from.

Expect the drink menu to grow, including signature cocktails and shochu, a traditional distilled spirit typically made from sweet potatoes.

"It's probably one of the most popular cocktail spirits in Asia in general," Miho says. 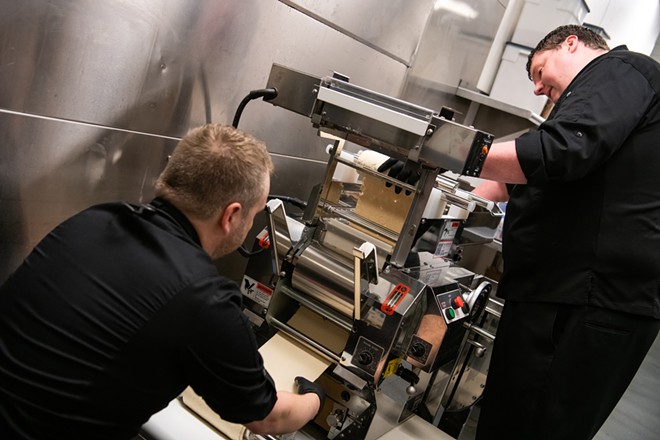 Fresh noodles are integral to the East menu and are made daily on a specialized noodle-making machine imported from Japan that looks like a space age version of a Dr. Seuss contraption.

The shiny 4-and-a-half-foot-tall machine makes the process look easy: mixing the flour and water into a crumbly dough; compressing the dough onto rollers; pulling the rolled dough through the cutting blades under a faint stream of flour to keep the tender noodles from sticking.

Learning how to use the device, however, involved trial and error.

"So that process came on a Post-it note," says Neeson, gesturing with his hand to indicate the note was very small. He and Miho, who's sitting next to him for our interview, both laugh. Miho wrote the note.

Noodle making is less about following steps than it is "the tactile experience behind it that you need to acclimate to and get used to so that you can spot that it's right," Miho says.

"I found it's always best to just dive right in," he adds. "And for it to be fun and communal, because that's how we're all gonna learn."

Miho would know. His more than 30 years of culinary experience includes running a Thai restaurant in Seattle, and creating Miho Izakaya in Portland, which specialized in Japanese and Hawaiian cuisine, as well as sake.

"When I was younger, I worked at a pasta factory for my girlfriend's mother, who is Italian," says Neeson, who's originally from Belfast, Ireland. Prior to Northern Quest, Neeson was a manager at both Tito's Italian Grill and the Davenport Hotels restaurants.

With the aid of the magic noodle-making machine, East can turn out 100 or more portions of noodles per hour, including the gluten-free yam noodles featured in some dishes.

Although the menu doesn't specifically denote allergen-free foods, much of it aligns with current food trends, like vegan and vegetarian eating.

That's inherent to much of Asian cooking, says Miho, who was born in Hawaii and is of Japanese heritage. There's typically little or no dairy, nor eggs, and less of an emphasis on wheat in Asian dishes.

As the management team researched the concept for East across the greater Spokane area, explains Miho, they found that the number of places serving Asian cuisine — versus European — was substantial. And growing.

"It's not as heavy, like classic French, or Italian, sort of heavy pastas or stewed items," Neeson.