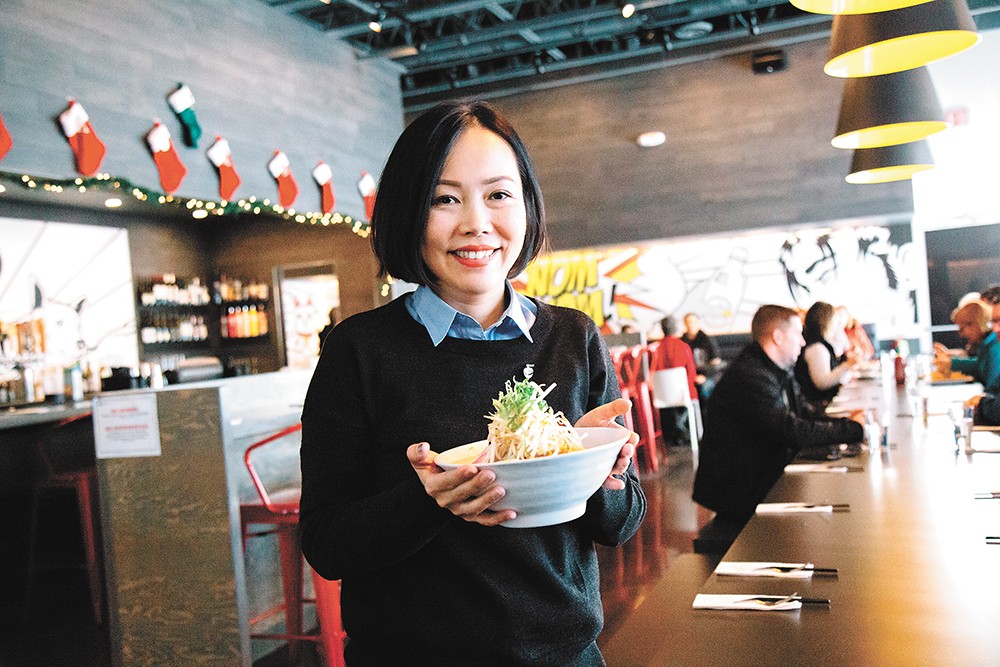 Noodle-loving folks from North Spokane and beyond

can now get their fill of Nudo's brothy bowls in the restaurant's new spot at Northpointe Plaza.

After opening in late September, the second location offers the same menu, familiar to diners who've frequented the ramen house that first opened in downtown Spokane in 2014. Nudo was one of the first Japanese-style ramen restaurants to open in the region, serving bowls of thick egg noodles submerged in a hearty meat (pork or beef) or vegetarian broth, topped with hard-boiled eggs and fresh veggies. This ramen is nothing like the dehydrated packets of noodles regularly consumed by college students and starving artists alike. And while fresh ramen may no longer be a novelty in the Inland Northwest, owner Jingou Hissong says that many customers at her new spot hadn't yet been introduced to the concept.

"A lot of people didn't know how ramen could be, and people really like it. We feel like we're introducing ramen to the north side of Spokane," Hissong says.

For diners looking for something to enjoy alongside — or even in place of — the steaming noodles ($9-$14), Nudo's two Spokane locations continue to offer yakitori ($2-$4), single-serving skewers of grilled meat or veggies, alongside rice bowls ($9-$14), chow mein ($12) and other Asian-style appetizers; gyozas, edamame, calamari, seaweed salad and more. Perhaps the most unusual item on the menu remains the Americanized ramen burger ($12), a beef patty served between two formed "buns" of ramen noodles. Most will want to eat this messy and slippery creation with a knife and fork, which makes for easy dipping in the side of tangy tonkatsu sauce.

Repeat customers of Nudo will notice a consistently sleek, minimalist design at the Northpointe location, designed by Spokane-based HDG Architecture and featuring bold, pop-art graphics by Jesse Scheller along the walls. With more seating than downtown's Nudo, inside capacity is just under 100 seats, with a patio that adds about 50 seats during warmer months.

This new Nudo shares half of a building with the also new Sweeto Burrito, a regional fast-casual chain with a drive-through. The stand-alone building was formerly the home of Shakey's Pizza until early 2015.

Hissong adds that there are plans to continue expanding Nudo across the Inland Northwest, most likely with a restaurant in the Tri-Cities next.

Because of its location in one of the neighborhood's biggest shopping centers, directly visible from Highway 2, Hissong says the new location has been noticeably busy since opening.

"We get a lot of walk-ins and take-out," she says. "We've been really busy with the [holiday] shopping season, and people are like, 'Let's go to Nudo.' A lot of people say, 'We're so glad you're on the Northside now.'"♦