Not a Press Conference 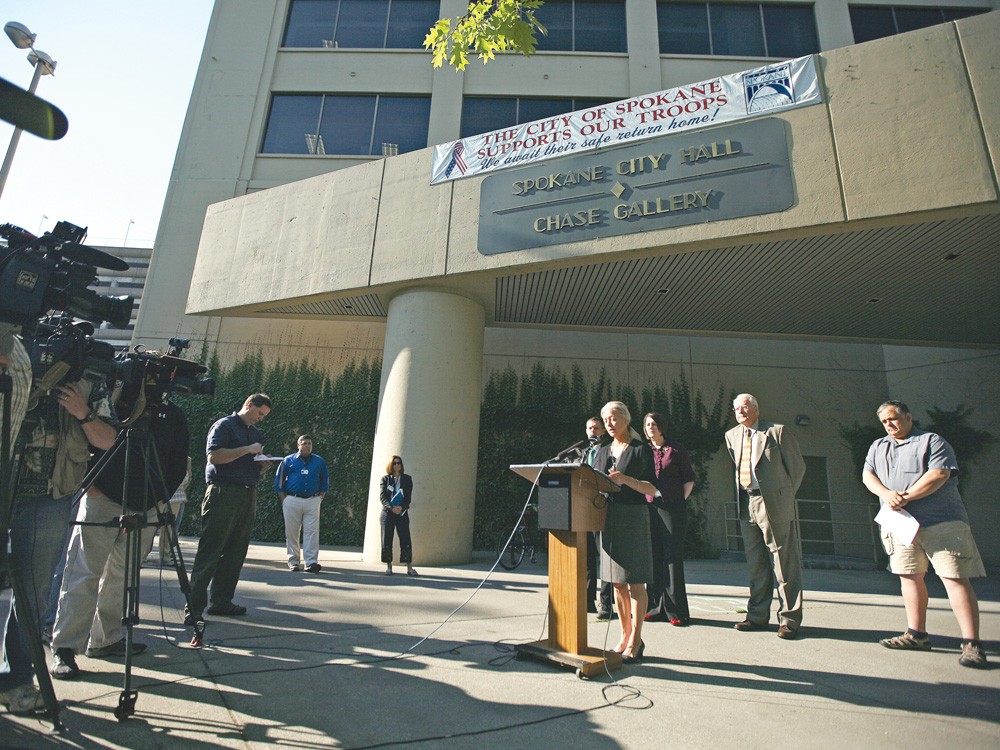 “The mayor of Spokane called reporters to what she said was a news conference this morning,” Shaw said. The mayor took no questions and, according to KREM, “only added to the mystery and speculation of a city cover-up” in the case of Otto Zehm, who died in 2006 after being mistaken for a robber and violently confronted by Officer Karl Thompson in a Spokane Zip Trip.

KHQ tied its coverage of Verner’s briefing to recent criticism by David Condon, who is vying for Verner’s job and who has slammed her handling of the Zehm case.

The Spokesman-Review described the briefing as “hastily arranged.”

“She’s trying to do what she thinks is right,” says Marlene Feist, the city’s spokeswoman, speaking on behalf on Verner, who is traveling on city business in Japan. “It wasn’t to earn points in the media. The media can perceive it as they want.”

In this case, the mayor was outlining a proposal to have an independent, external review of the city’s handling of the Zehm case. But the first to call foul on the mayor was not the media, but Councilman Bob Apple, who showed up uninvited to the briefing and, when Verner refused to field questions, happily talked with reporters.

“Nothing’s been done to correct the problem” that led to Zehm’s death, said Apple, whom Verner has considered a close political ally. “We have now had a number of problems since. And I’m sure they’ll be swept under the carpet. If there’s anything wrong at all, it’ll be covered up.”

It certainly wasn’t Verner’s best week. Condon, her challenger in the election, released a blistering statement on Tuesday. He said she had “wasted taxpayer money and slowed the course of justice by her defense of the city bureaucracy and the mismanagement of this case.”

“Who is to blame?” Condon continued. “Prosecutors, police officers, and city attorneys all contributed to this terrible situation. Ultimately, Mayor Verner is to blame for failing to put on the brakes.”

In response, Verner accused Condon of being naive. “I believe this latest political tactic shows that candidate Condon is not qualified or prepared to be entrusted with large, complex decisions that impact the community, as a whole,” she said in a statement.

Condon is unapologetic. “If it took a political action to make this happen, then OK,” he says about Verner’s decision to review the city’s handling of the Zehm case.

“It just showed me once again that the mayor is not showing leadership or taking accountability on anything. … Right now, it looks like a council-city manager form of government,” he says. “Why not just take the questions [from reporters]? Of course you’re going to get questions. Just think through them a little bit before hand.”

Condon also says Verner has failed to empower the police ombudsman’s office, which was recently stripped of powers by the state.

When the City Council expanded independent investigative powers for the ombudsman in 2010, the Police Guild filed an “unfair labor practice” complaint with the state. After conferring with city attorneys and outside lawyers, the Council agreed to go to arbitration with the matter. During arguments, the Guild provided the state arbitrator with an opening statement, one witness and 16 exhibits. The city provided none of these things and therefore offered no defense. The arbitrator sided with the Guild.

Upset with the decision, the Council asked the state’s Public Employment Relations Commission to reconsider the case. In a letter dated Sept. 1, an official with PERC wrote that the city had agreed to arbitration — and can’t complain about that strategy now.

Part of the official’s criticism was the city’s “unexplained silence at the arbitration hearing.”

“He’s wrong,” says Keller Allen, who was hired by the Council to defend the expanded powers ordinance. There were no witnesses to bring forward who would have had “bearing on this case,” and an opening statement would have been “meaningless.”

Going into arbitration was the best way to ensure an empowered ombudsman, says Allen, but “we were climbing up a steep, difficult mountain to win.”

The surest way to change the policy would be first to change state law stipulating what is subject to bargaining, Allen says, adding that anyone who says otherwise has a “naivete about labor law.”

But there is a third option. “This is a matter of negotiation with the Guild,” Feist says. “Currently.”

“We need an ombudsman that has clear and independent investigative authority,” Condon says. “The Guild has said the investigative power was not something that was off the table. It should have gone into the [labor] contract.”

How the current negotiations are going is only one of many unanswered questions.

Last month, Verner said she was seeking “all courses of action” to resolve the Zehm case: Does this mean the city will settle with the Zehm family? Does it mean a speedier trial? Also, is the city any closer to releasing internal police records, after the state Supreme Court recently affirmed cities’ right to do so?