Washington school districts are preparing for new requirements to teach tribal history and culture, and they're being asked to rebuild bridges that have been burned 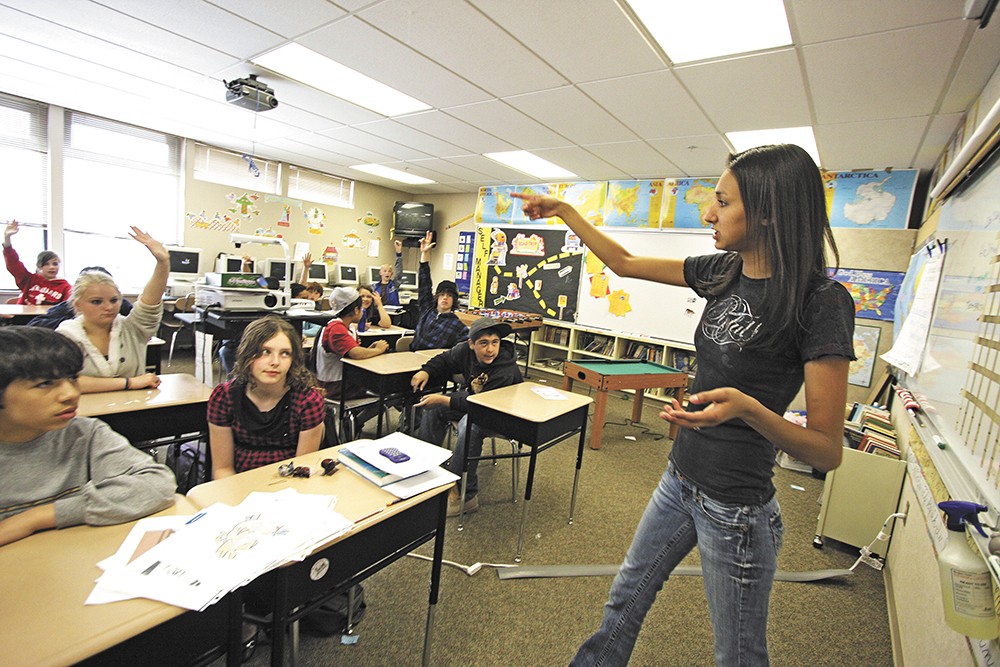 While working as a school counselor in Omak,

Lynn Palmanteer-Holder, an educator and member of the Colville Tribe, recalls attending a Thanksgiving pageant put on by a first-grade teacher.

On the stage in the school's gymnasium, the teacher had set up a table replicating a Thanksgiving feast, complete with pieces of paper cut into the shapes of corn and turkeys. With parents and teachers assembled, the teacher took to the piano and began playing a riff evocative of Indian drumming: dum-duh-duh-duh-dum-duh-duh-duh.

"Reeeeedddmaaaannnn," she sang out as kids wearing paper headdresses and pilgrim hats danced onto the stage.

After the pageant, Palmanteer-Holder had a talk with the well-meaning teacher about what was wrong with the pageant. This Pilgrims-and-Indians approach to teaching, she explained, just plays to stereotypes and leaves students without any meaningful understanding of tribal history or culture. The teacher was receptive, and began bringing in members of the Colville Tribe to teach cultural activities to her students.

"Those are the things we've wanted to do," says Palmanteer-Holder.

Now, Washington could be on the cusp of moving past the Pilgrims-and-Indians approach. In 2015, lawmakers passed legislation requiring each of the state's 295 school districts to teach the tribal history, culture and government of Washington's 29 federally recognized Indian tribes. The new law also has the unprecedented requirement that each district collaborate with the tribe closest to them in teaching the curriculum.

The new law is a milestone for people like Palmanteer-Holder, who say that teaching tribal history this way will benefit not only native students, many of whom lag behind their peers, but those peers as well.

"We're trying to take the concept of sharing tribal knowledge in Washington state, and we want to build the bridge between those tribes and their school districts," says Palmanteer-Holder, who is helping organize a summer teaching institute in Omak to help districts meet the requirements that go into effect for the 2016-17 school year.

But building these bridges won't be easy. The legacy of efforts to deliberately extinguish tribal cultures and languages still lingers. Unlike Montana, the only other state with similar requirements, Washington didn't attach any funding to its law, raising concerns that some districts may treat it as another unfunded mandate.

"We have nothing to really compare this to," says Michael Vendiola, who oversees native education in the state Office of Superintendent of Public Instruction. 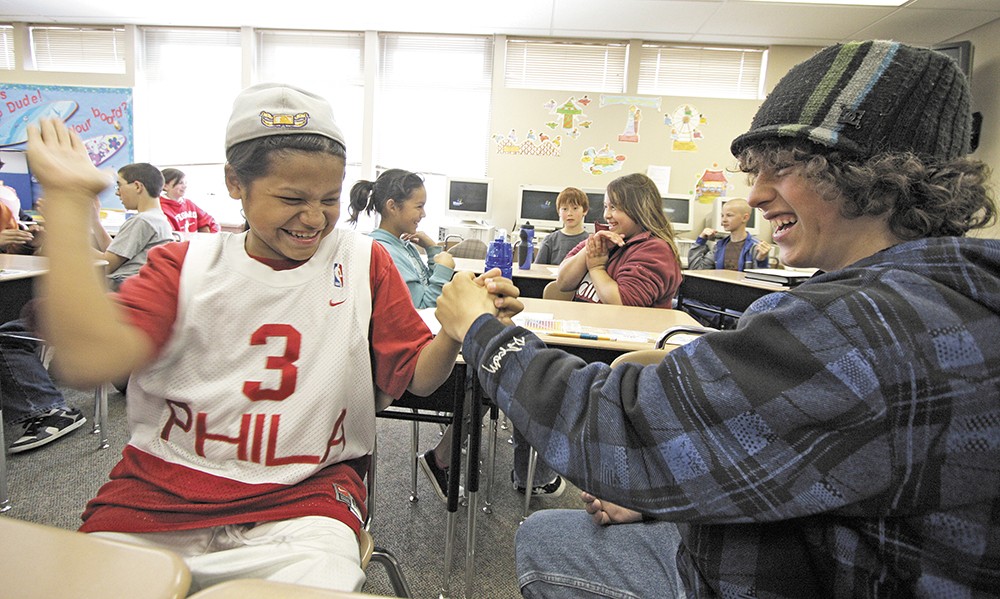 Young Kwak
Chad Browneagle (left) and Eli Peterson share a laugh. Proponents of the new education law say it will benefit both native and non-native students.

As a doctoral student in education

at the University of Missouri, Sarah Shear was the lead researcher in 2011 on a project examining how U.S. schools teach Native American history. After spending two years reviewing 2,000 state standards, she and her colleagues found that in 87 percent of curricula, Native Americans vanished after the year 1900, possibly leaving students with the idea that tribal history is a "long-ago forgotten history."

What's further troubling, she says, about these curricula is that they leave out critical events in the 1900s, such as government policies that sought to extinguish tribal cultures through boarding schools, as well civil rights movements, environmental challenges and tribes in modern society.

"Indigenous people were first presented as cooperative and friendly, like the 'pilgrims' narrative," says Shear. "Then toward the American Revolution, indigenous people are shifted to becoming the enemy, the people who collectively are standing in the way of the U.S. moving west."

Raymond Reyes, associate academic vice president and chief diversity officer for Gonzaga University who has 33 years experience in Indian education, says how tribal history is taught matters, because incomplete or skewed versions can perpetuate stereotypes and racism among non-natives. And how it's taught matters, he says, for native students who are facing an achievement gap.

A recent report on native education from the state Office of Superintendent of Public Instruction found that "Native students' graduation rate has consistently been the lowest" of any ethnic group, and their near-27 percent dropout rate was more than double the average. The problem in Washington mirrors the rest of the nation, and it has caught the attention of President Barack Obama, who issued an executive order in 2011 aimed at improving educational opportunities for American Indians and native Alaskans.

Reyes sees the new law as an opportunity, pointing to research finding that curricula which includes the experiences of previously marginalized ethnic groups can engage and motivate minority students.

Palmanteer-Holder knows firsthand how eager native students are to hear about their own culture. She recalls teaching a room of especially rowdy students. When Palmanteer-Holder began reading from a collection of native folk tales compiled by Christine Quintasket, a native author in the early 20th century who wrote under the name "Mourning Dove," she says she had each student's full attention.

But she's also seen resistance that's come in the form of comments on news websites, asking "What are they going to teach, gaming?" She also remembers being stunned by offhand comments made by other educators. In particular, Palmanteer-Holder recalls talking to a principal in a rural area that was once a native gathering place.

"He told me that we don't have to worry about the [state requirements] because we don't have any Indians around here," she recalls.

Palmanteer-Holder worries that districts will see what could be an opportunity as a burden. Indeed, after the bill creating the requirements was proposed, Ken Kanikeberg, chief of staff to State Superintendent of Public Instruction Randy Dorn, told a legislative panel that implementation would be uneven because some school districts have more resources.

According to a report provided to lawmakers by OSPI, the office has seen an increasing interest from districts. More 300 people from just 93 of the state's 295 school districts have participated in all-day trainings facilitated by OSPI, according to the report.

OSPI's Vendiola says that his office has been busy with inquiries from districts looking for guidance on how to implement the curriculum, and hasn't been monitoring noncompliance.

There's another obstacle, says Palmanteer-Holder, and that's the legacy of boarding schools where Indians were taken, sometimes for years at a time, to forget their ways. The practice continued into the 20th century, and Palmanteer-Holder says, "We have this gap in knowledge."

the bill with the new teaching requirements, Spokane Public Schools began evaluating what it was currently teaching, and began incorporating material from "Since Time Immemorial," a curriculum developed collaboratively by OSPI and the state's 29 federally recognized tribes.

"We don't want it to be check off the box, 'OK, we've done the Indian unit, so therefore we've met the requirements,'" says Wendy Watson, the district's director of secondary curriculum, of how Native American history and culture will be woven into existing social studies courses and taught throughout the year.

A challenge for the district is training hundreds of teachers in the new curriculum, which is complicated by a statewide teacher shortage, says Steven Gering, the district's chief academic officer.

Maybe the biggest undertaking, says Gering, is the law's requirement that each district collaborate with the nearest tribe to teach its history, culture and government. For SPS, that tribe is the Spokanes.

"It's not past tense," he says of the Spokane Tribe's history. "It's rich and alive and right here."

Gering says the district wants to avoid treating the Spokanes as a cultural "monolith" and has been reaching out, trying to build the long-term relationships to incorporate the tribe's voice into the curriculum.

The tribe is working on how to tell its own story.

Last year, the Wellpinit School District, which serves the Spokane Tribe, received a federal grant to develop its own culturally relevant curriculum. Polo Hernandez, the grant coordinator, says that the grant is separate from the state requirements, and is being used on a more ambitious project.

The curriculum was developed with three teachers, four "cultural liaisons" and Hernandez, along with input from tribal members and tribal departments overseeing natural resources, as well as language and culture. Hernandez, sitting at a table at Wellpinit High School with others who helped develop the curriculum, stresses the collaborative nature of the project.

Currently, the Wellpinit School District's tribal history curriculum is in a pilot phase being taught to 28 seventh-graders and 18 fifth-graders, says Hernandez. Students might hear tribal stories about how the plains were created during a geography lesson that includes Salish words for geographic features, he says. They also learn traditional skills, like how to make a tule mat out of reeds. Salmon and rivers, which hold deep cultural significance to the tribe, are already being incorporated into history lessons.

Geri Flett, a social studies teacher, says that a challenge to crafting the curriculum is that there are "different versions of history in the tribe."

Warren Seyler, a tribal member who works for the Department of Natural Resources, chimes in that even the curriculum developed by the state leaves out critical events like the incident at Hangman Creek, where Col. George Wright hanged seven Indians in 1858. He also notes that it's hard to teach culture in schools because "not every family has the same culture."

What further complicates these efforts, says Seyler, is the trauma of having the tribe's history suppressed for so long.

"We weren't taught that stuff," Seyler continues. "But now we want our kids to know that part of their history." ♦