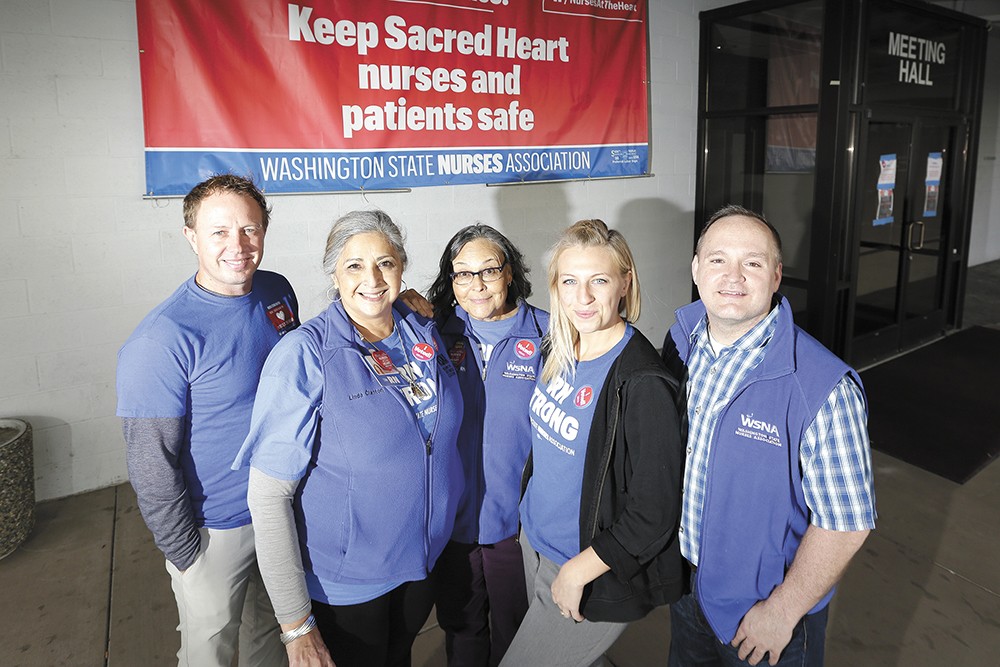 Young Kwak photo
Sacred Heart nurses and members of the negotiation team outside the union hall in October.

Just two weeks ago, labor unions representing both nurses and hospital support staff at Sacred Heart Medical Center were gearing up to strike.

Now, after over a year of contract negotiations with Providence Health and Services — a large nonprofit that runs hospitals across the West Coast — and marathon bargaining sessions that went until the early hours of the morning, both unions have contract agreements, and they're claiming a resounding victory.

"Nurses have been laughing and crying and cheering," says Stevie Lynne Krone, a 28-year-old nurse at Sacred Heart and co-chair of the local branch of the Washington State Nurses Association, the union representing around 1,900 nurses at the hospital. "The nurses and the local Sacred Heart workers, there's a lot of relief and thrill that this is over with."

Negotiators representing the Washington State Nurses Association came to a tentative contract agreement with Providence officials at around 3 am on Jan. 7, according to a news release. The following morning, UFCW 21, the union representing hospital support staff at Sacred Heart, reached an agreement.

"It was a 33-hour marathon essentially," Lynne Krone says. "It was a long couple days. At 3:38 am was when we walked out and I was there when all that happened."

In October, a majority of members of both the Washington State Nurses Association and UFCW 21 voted to authorize strikes, arguing that Providence wasn't budging on key bargaining points, such as scrapping nurses paid time off and sick leave.

However, union officials say that nurses and hospital support staff alike won significant concessions from Providence. For instance, the nonprofit eventually caved on the demand that nurses keep their earned benefits, such as paid time off and sick leave.

"We weren't trying to get more [benefits]," Krone says. "We were trying to keep what we had when Providence was trying to reduce our paid time off, our sick days, and put us on the state plan."

"When you're in a crowd of nurses, you can ask who has been assaulted by a patient and 90 percent of the room will raise their hand," she says.

The new contract also features a wage increase of 10 percent over its three-year term and a ratification bonus of $2,100, according to a Washington State Nurses Association news release.

Members in both unions will vote to ratify the tentative contract agreements on Jan. 16. Krone says that she expects the nurses to approve it.

"I believe we'll be able to ratify the contract," she says. "After all their hard work together after the last 14 months, it feels good."

Providence spokeswoman Jennifer Semenza told the Inlander in an email last week that they would share more information about the contract after it was ratified.

The end in local contract negotiations comes as workers at other Providence-run hospitals across the state have either secured their own agreements or are still at the bargaining table. Within 48 hours after UFCW 21 workers at Sacred Heart reached an agreement, UFCW 21 announced that health care workers at St. Mary Medical Center in Walla Walla, Providence Medical Center in Everett, and Saint Peter in Olympia had all reached tentative agreements with the nonprofit. ♦