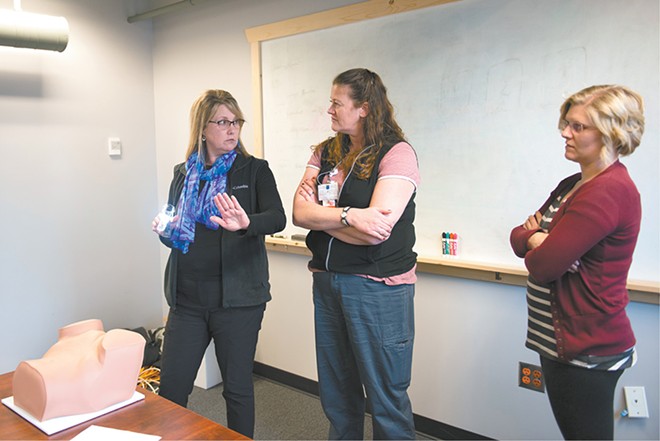 "Any experience with pelvic exams? As far as like a speculum exam or OB stuff?" asks their trainer, Kelly Anderson, a nurse practitioner who conducts sexual assault exams for cases involving children in the tri-county area north of Spokane.

The three shake their heads no.

A couple of them are responsible for training others in their hospitals on how to collect a sexual assault kit from rape victims. But none of them, despite being trained as sexual assault nurse examiners (commonly called SANE nurses), have conducted a pelvic exam; that usually gets left to doctors on duty in their emergency rooms at MultiCare Spokane Valley, MultiCare Deaconess, and Providence Mount Carmel in Colville.

"OK, well, we're going to show you what the normal inside looks like," Anderson says, launching into a slideshow with pictures of cervixes in women who have and haven't had children.

Then each nurse gets a turn using the speculum to inspect the plastic model, which is much stiffer than a real person would be. Anderson notes how to explain each step of the invasive process to a woman as they're going, in an effort to minimize uncomfortable surprises that can be upsetting even during a routine examination.

This type of hands-on training is rare for nurses to receive in Eastern Washington, says Beth Sheeran, a SANE nurse who has worked tirelessly to improve access to training for other nurses in the area.

"When we went to Oregon for a training, our nurses were the only ones who didn't know how to do pelvic exams," Sheeran says.

While many of the nurses in area ERs have received three or five-day trainings in how to collect sexual assault evidence and minimize harm to patients, this type of ongoing and advanced training is key for the nurses to be able to meet national standards and give patients the best care possible, she says.

"Our nurses, because they're working for a good two to three hours one-on-one with a patient, they really do develop that rapport," Sheeran says. "They've been in that room, building that significant trust level. It is nice when the nurse can do the entire kit."

To address the lack of ongoing regional training options, Sheeran worked to offer the 9-to-5 Nov. 1 workshop, which was free to all the nurses who came from Kootenai, Whitman, Spokane and other nearby counties, and was put on in coordination with MultiCare, Kootenai Health, the Washington State Patrol crime lab, Spokane County Sheriff's Office, Praxis Coworking and other companies involved in health care regionally.

In addition to pelvic exams, the nurses learn firsthand how the crime lab hopes to receive evidence, they hear how a specific chemical application can enhance images of injuries, and they practice forensic photography, capturing pictures of mock injuries on nursing student Jarrod Haggard, who lifts his arms and shirt as the nurses document makeup "bruises" and "scratches."

As the state continues to address deficiencies in the medical and criminal justice systems — such as a new program that allows sexual assault victims to track the progress of their rape kit at state crime labs — working to improve disparities in education around the state is just another step toward making things better for everyone, Sheeran says.

"It's scary when you see the layer-on-layer brokenness, but you can chip away at it, and we are chipping away at it," Sheeran says. "We really believe that we can do something within our community that can be beneficial. Every single little piece matters." ♦