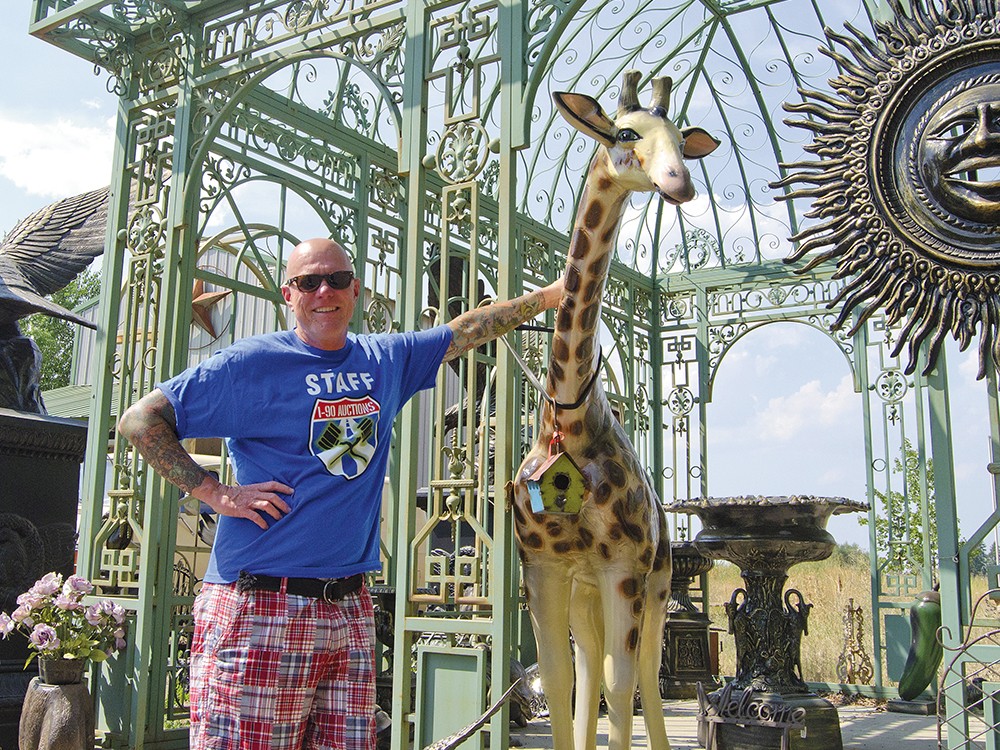 Jacob Jones
Mike Ferguson: "The fun for me is still acquisitions, finding stuff."

Beyond the red double-decker bus, past the marble lions and neon signs, out behind the cast-iron eagles, aluminum buffalo and gargoyles, Mike Ferguson reclines in the shadow of a 30-foot metal palm tree. Shirtless in the afternoon heat, he speaks into his cellphone, placing an order for more flying saucers.

Just off the freeway west of Spokane, Ferguson has established a surreal, park-like sales lot that would make Willy Wonka proud. At I-90 Auctions, he deals in the massive and ridiculous, selling immense statues, rare antiques and wild ideas.

“There’s nothing that scares me,” he says. “Right now, I’d like to buy an airplane, like a 737 size, because I want to turn one into a guest house.”

Ferguson, 53, once operated out of a house along Ruby Street, packing the yard with statues, fountains and cast-iron collectibles. Starting with antiques and sculptures, he eventually took on importing larger pieces personally from China, Mexico and Italy.

“The fun for me is still acquisitions, finding stuff,” he says, adding, “It’s just what I think is cool.”

Ferguson says he invests about 60 percent of his money on his proven winners, customer favorites that always sell well. He spends another 30 percent on new or “cool” stuff he wants to try out.

The last 10 percent he spends on “stupid” things, just gambling on what might sell big.

With his new space, Ferguson created an inviting oasis of weird. Curious travelers pull in for a rest from the road and reality. Children explore the maze of wonders and relics, including playground equipment salvaged from Natatorium Park. Passing bikers picnic under angelic stone sculptures.

In 2010, Ferguson suffered another hit when a routine medical test uncovered prostate cancer. To pay the bills, he returned to his previous career as a nurse with the VA Medical Center. He and his family sold off much of the statue inventory as they prepared for the worst.

Three years later, both Ferguson and the economy have recovered. His prognosis is good and sales are on the rise. Just last week, Ferguson quit his nursing job to go back to the auction house full-time.

It’s time to start thinking big again. Ferguson already has plans for his next trip to China, dreaming up a new inventory of larger statues, stranger pieces and unlimited possibilities.