Can a member of Occupy Spokane join the Legislature? 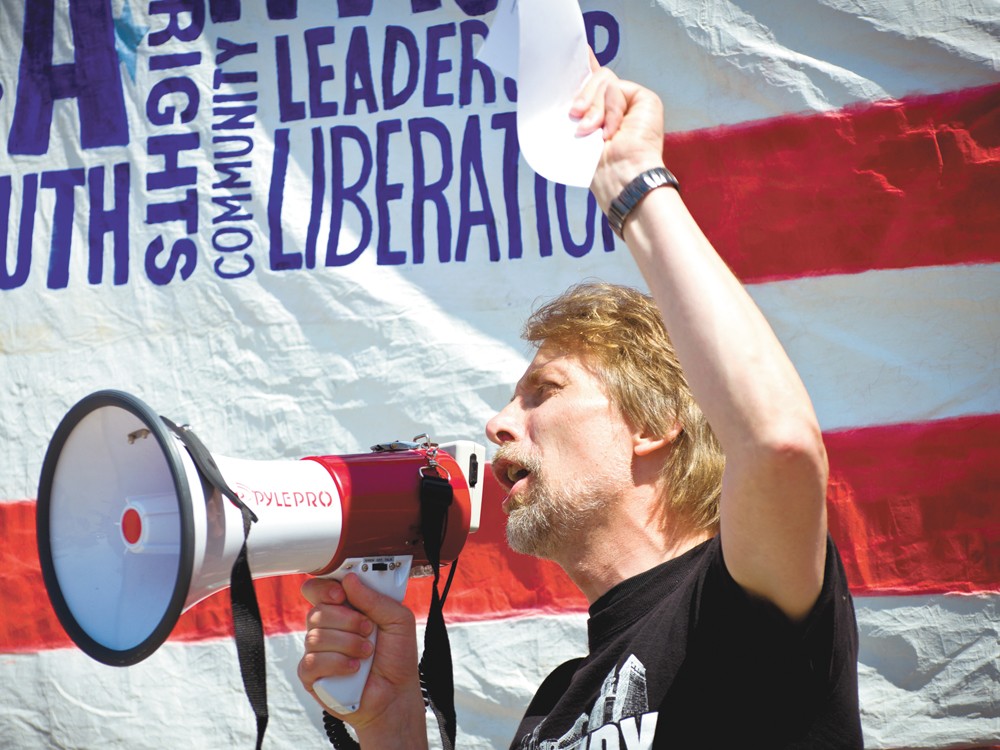 Colin Bishop
Wayne Spitzer, at an Occupy rally last weekend, is making a run for the state Legislature.

It’s the day before Bloomsday, and as he stands by the water fountain in Riverfront Park, Wayne Spitzer checks the levels on his bullhorn.

About a dozen people, members of Occupy Spokane, surround him. One carries a hand drum and hums songs. Another has brought flowers to hand out. Without much hubbub, they thread through the throngs of expectant Bloomsday participants. Slogans are written in chalk on the concrete. The bullhorn isn’t really used and neither are chants — the Occupiers don’t want to drown out the street musicians who came out to play for the Bloomsday crowds.

Still, the bullhorn hangs by his side, and Spitzer has grown comfortable with it. He’d never thought about leading anything like a march until he came to a rally one day and the usual organizer didn’t show. He stepped up, he figured, because somebody had to do it. What a jolt.

“Something awakens in you and you didn’t even know it was there before,” Spitzer says.

Spitzer may be best known to Spokane for his low-budget horror films like Shadows In the Dark or his novel Flashback, which he published when he was 23. Spitzer has recently taken a more academic track, earning a bachelor’s in English in 2006 from Gonzaga University and a master’s degree in 2010 from Eastern Washington University. But now the 45-year-old is trying something different — making a run for the state Legislature.

But can someone so far from the machinery of organized politics wage a successful campaign against a savvy, well-funded politician like his opponent, 6th District Republican Rep. Kevin Parker?

While she doesn’t know Spitzer personally, Cejka says Spitzer has filed to seek the endorsement of the Democrat Party and that a decision on that will come soon.

And then there’s money. Spitzer told The Inlander he has so far raised $350. Parker, according to state records, has raised about $150,000. Spitzer sees that as an advantage — he says he’s not beholden to others and can say whatever he’d like. When The Inlander asked him for an example, Spitzer took issue with Parker’s votes against marriage equality.

When asked about marriage equality, Parker told The Inlander that he’s more focused on figuring out how to create jobs.

“I think right now the majority of people want to know if there’s someplace for them to go to work,” Parker says.

“I’m going to stay focused on those economic issues,” he says, adding that if he’s re-elected, he wants to continue to work on reforming government agencies and education.

If elected, what would a Rep. Spitzer do? He wants to bolster the state’s safety net and spend more to help people in trouble.

Spitzer says he’ll be able to relate to people because he’s experienced financial hardship. As if to burnish his credentials, Spitzer says he’s currently on state health care.

“A lot of working people in Spokane, they don’t own a coffee chain,” Spitzer says, referring to Parker’s ownership of some Dutch Bros. stores. “They have a coffee cup, a refillable one that they probably refill at 7-11 or Starbucks.”