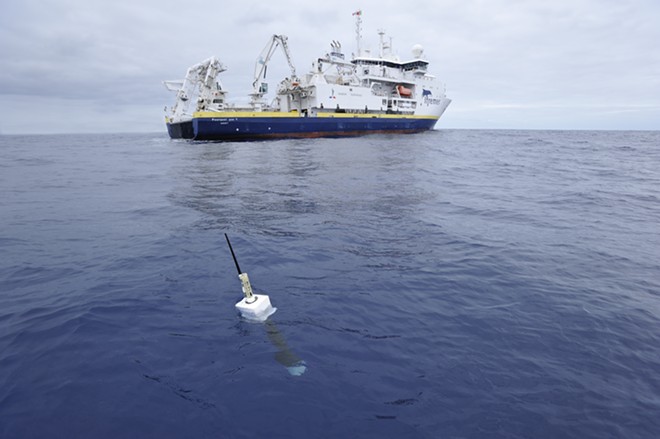 Olivier Dugornay/IFremer/Argo via The New York Times
In an undated photo provided by researchers, the French research ship Pourquoi Pas deploys a sensor as part of the Argo project to monitor ocean temperatures. Scientists say that ocean warming is accelerating more quickly than previously thought, a finding with dire implications because almost all of the heat trapped by greenhouse gases ends up stored in oceans. (Olivier Dugornay/IFremer/Argo via The New York Times)

Scientists say the world’s oceans are warming far more quickly than previously thought, a finding with dire implications for climate change because almost all the excess heat absorbed by the planet ends up stored in their waters.

A new analysis, published Thursday in the journal Science, found that the oceans are heating up 40 percent faster on average than a U.N. panel estimated five years ago. The researchers also concluded that ocean temperatures have broken records for several straight years.

As the planet has warmed, the oceans have provided a critical buffer. They have slowed the effects of climate change by absorbing 93 percent of the heat trapped by the greenhouse gases humans pump into the atmosphere.

As the oceans continue to heat up, those effects will become more catastrophic, scientists say. Coral reefs, whose fish provide key sources of protein to millions of people, will come under increasing stress; a fifth of them have already died in the last three years. Rainier, more powerful storms will become more common, and coastlines around the world will flood more frequently.

Because they play such a critical role in global warming, oceans are one of the most important areas of research for climate scientists. Average ocean temperatures are also a consistent way to track the effects of greenhouse gas emissions because they are not influenced much by short-term weather patterns, Hausfather said.

“Oceans are really the best thermometer we have for changes in the Earth,” he said.

But, historically, understanding ocean temperatures has also been difficult. An authoritative U.N. report, issued in 2014 by the Intergovernmental Panel on Climate Change, presented five different estimates of ocean heat, but they all showed less warming than the levels projected by computer climate models — suggesting that either the ocean heat measurements or the climate models were inaccurate.