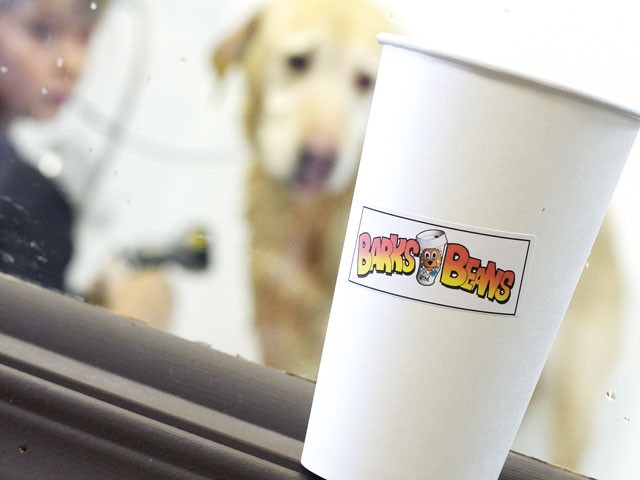 He’s a little panicky, but I’m totally relaxed. I’m always having to take care of him — feeding, watering, cleaning up his feces — and it’s nice to have someone else do it for a change.

The idea of mating a cafe with a dog wash seems odd, but co-owner Roger Villareal says it was natural.

Co-owner Kim Brown “was thinking about opening up a coffee shop, and I just got a dog and was thinking of self-dog wash,” Villareal says. “We started brainstorming, and the name just clicked. Then we found the location and it was a no-brainer.”

Having a groomer on staff so that patrons don’t have to eat their deli sandwiches ($7 for a whole, with choice of soup, salad or chips) with wrinkly fingers, Villareal says, just kind of emerged organically from there.

More and more business owners in the area, it turns out, are thinking along Villareal’s lines. In the last year or so, Spokane has begun to breed curious strains of coffee shop.

ReBOOT (501 S. Thor St.) opened in December, down the hill in East Central, caters both to the under-caffeinated and those in need of a disk defrag.

Divided into two distinct rooms, the spaces are a study in contrasts. The coffee, in custom organic blends from Roast House, was the best of any hybrid shop we went to and is offered in a space painted in comforting tones of slate and chocolate, with industrial fixtures bouncing soft light off accents of lime green. In these comfy confines, (and with your back to the windows), it’s easy to forget you’re on a major arterial with a view of a Fred Meyer.

The computer tech services — everything from data recovery to malware removal to hardware overhauls — happen in a room to the left of the entrance, painted an antiseptic white, with blonde wood tones and hard fluorescent lighting.

They’ve been in the tech business for 15 years. They started coffee operations last December.

ATTICUS (115 N Howard St.), which opened in 2009 and became a staple of coffee drinkers, is a hybrid too, of course, mixing home décor, books and gifts with Four Seasons and Doma coffee and pastries from a variety of area bakeries.

In north Spokane, at the corner of Nevada St. and Lyons Ave., REVIVE COFFEE and THE LAUNDRY ROOM (6704 N. Nevada) aren’t truly hybridized. They’re more like conjoined twins. Maintained as separate businesses, the coffee shop and laundromat are owned by the same family, and Rick Mattson, who manages both, says cross-pollinating customers from one to the other was the point all along.

“The area needed a laundromat, and we thought a little area coffee shop would work well too,” he says. To get people to patronize both, Mattson offers coffee discounts for people who do a load of laundry. While the majority of business comes from the area’s apartment complexes, which flank the little strip mall from all angles, Mattson says Revive and the Laundry Room pull students from as far away as Whitworth University up north and Moody Bible Institute well to the south.

Tiles of lime and peach and turquoise and dusty rose accent a wall-length mural of a bucolic mountainside filled with playing children and donkey-drawn coffee bean carts. They use an organic blend from Seattle’s Café d’Arte to create flavored lattes that downplay the coffee, very much in keeping with the sensibilities of the north side.

Spokane wins in raw numbers of hybrids, but the absolute epitome of local hybridization is out in the Valley.

BRONZED BEANZ (3117 N. Argonne Rd.), in the town of Millwood, is one business with two distinct entrances. The west entrance takes you directly to the coffee. The east leads you past a manicurist, down a hall of tanning beds and past an e-cigarette display before depositing you in front of the Torani syrups and Uccello’s beans.

Mike Brown bought the business last spring with Christa Roberts. The location had been a coffee shop since 1992 and a coffee-shop-tanning-salon hybrid for the last several years, but Roberts and Brown have taken it up several notches. They brought the e-cigarettes in last year. The nail person started on Monday. It seems random, but the mix is intentional.

“Tanning is an addiction,” Brown says. “Coffee is an addiction. Nails are an addiction. We’re a one-stop addiction fix.” He says the Uccello’s coffee is unique in the area because they air pop their beans rather than using traditional roasting methods. It’s a process that gave my double short late ($2.75) a mild flavor and, quite literally, notes of popcorn.

He and Roberts feel that vices are recession proof, but it’s important to stay diversified. “In a down economy it’s good to offer multiple services,” Brown says, “to draw an individual away from other places.” Everybody does coffee. No one else also does nails and tanning and electronic cigarettes.

That isn’t to say that every patron is sating multiple cravings here. The shop has its coffee regulars. “[One guy] is an every day, twice a day customer.” It may just be, though, that Roberts and Brown haven’t yet begun offering that man’s other addictions.

The shop’s catchy, ambiguous slogan, “Get buzzed while you bake,” certainly leaves room for growth into other areas.