Of All the Places

With the world as my oyster, I still chose Spokane 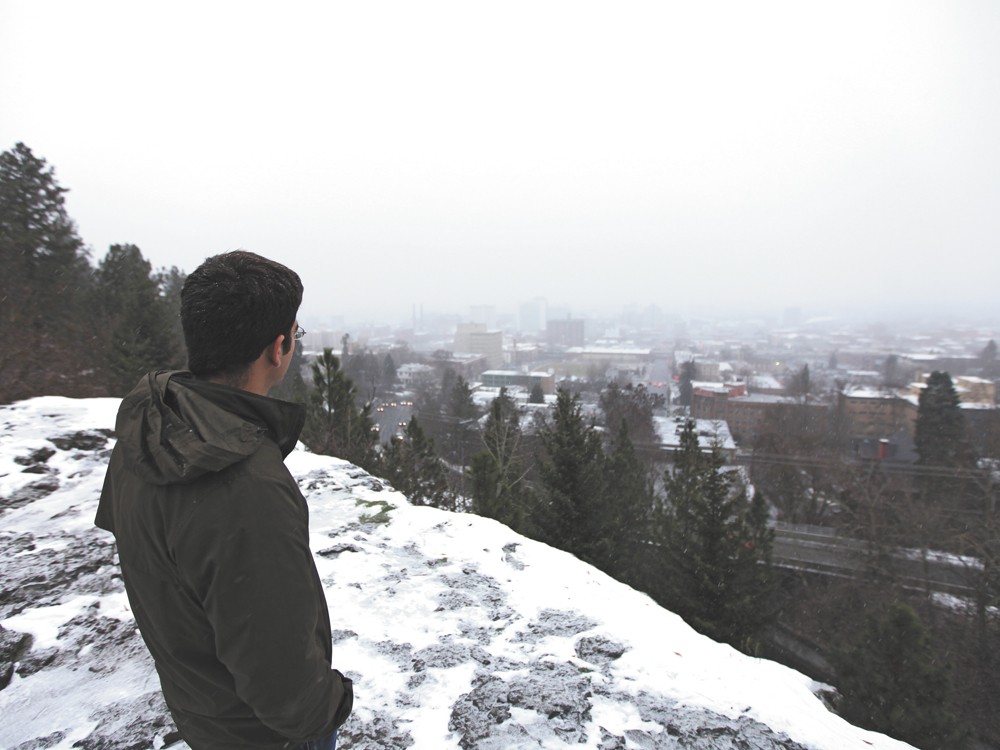 Young Kwak
Scott Leadingham enjoys the view of downtown, his home for the time being.

That’s a question I’ve been asked a lot — and asked of myself — in the past 18 months. When people find out I moved here after having the choice of living anywhere I wanted, they seem surprised.

You do realize it’s Spokane, don’t you? they suggest, not in so many words, but in their inflection. Curiously, the more west of the Cascades they live, the more condescending the delivery.

They appear surprised to learn that not only does Spokane and the larger Inland Northwest have Internet, but roads, bridges and even traffic lights. Starbucks? Yes, Starbucks, too. And even independent coffee shops. The other day I saw someone using an iPhone.

I’m fairly certain the iPhone user wasn’t from the elusive “west side,” that magical pixie land we inland hicks can only dream of one day seeing with our own meth-wearied eyes. Of the people who ask me “Why Spokane?” I’m never surprised to hear many haven’t been here. It is, after all, the “red-headed stepchild” of Seattle.

But, hey, everyone loves a ginger.

Before going forward, a little background: I’m a Washingtonian through and through, born and raised in Grand Coulee and educated at Central Washington University in Ellensburg. Graduate school and work took me to Indiana for five years, where I learned how much I dislike corn and tornadoes. Even though I grew to thoroughly appreciate the Midwest, it wasn’t a long-term proposition. Given the chance to keep my job and work remotely, I took the opportunity and headed back to the only place that could ever truly be home: the Northwest. Plus I already had a Subaru wagon, skis and a mountain bike, so I fit the target demographic.

The decision of where to live was mine: Portland, land of everything hip and the coolest bookstore on Earth. Seattle, technology central, framed on two sides by stunningly beautiful mountains and a water-lover’s paradise. Wenatchee, relatively small, but close to so much, and rich with proximity to snow, arts and wilderness. Bend, Ore., out of the way, but an outdoor junkie’s dream and fond of good beer.

In truth, I didn’t know what to expect. I was exposed to Spokane enough growing up but hadn’t spent any significant time here, other than trips for shopping, movies, birthdays and to shove garbage up a metal goat’s nose. (When you’re from a small town, it doesn’t take much to entertain.)

But Spokane seemingly offered an ideal balance of urban-versus-outdoor proximity. The city’s “near nature, near perfect” slogan may be a little overblown, but it’s appropriate for someone like me: young(ish), desiring of the amenities of city life but in need of accessible outdoor recreation in many forms. I like snow and recreating in it. I like four distinct seasons. And I hate traffic. A lot.

Working from home gives you a unique perspective on the flavor of the city. I’m fortunate to have a panoramic perspective from my lower South Hill apartment and a short walk to Cliff Drive, which overlooks the city and has a great Mt. Spokane view (on which I’ll be skiing in 30 minutes). This isn’t to brag or flaunt my non-existent wealth. The two-bedroom space allows me to have a junk storage room — er, office — for a very affordable price. Could I afford the same space with a view in Seattle? Absolutely not.

Of course, there are tradeoffs to living in this distinctively non-Seattle city. A friend often tells me how vexing it is that a gay person would want to live here when Seattle offers a much more open atmosphere. Perhaps that’s true if your measure of openness is the number of LGBT-friendly bars and the size of its annual Pride parade. So, yes, Spokane is not Seattle. But Seattle is not San Francisco, and San Francisco is not New York.

Rather, each city stands on its own, with its own offerings, appeal, challenges and admitted downsides. I would hate to see Spokane without the few gay-friendly bars, or the Odyssey center for LGBT youth, or other organizations that promote diversity, inclusion and understanding. Those institutions didn’t come about by concentrating themselves in “friendly” neighborhoods in Seattle or San Francisco. Neither do LGBT individuals or any minorities become fully equal parts of society by staying only where it is most comfortable, where everyone is the same as them.

Will I eventually move? Honestly, most likely. That’s the nature of the young, unattached bachelor mindset. But it won’t be out of spite or with ill will. And I’ll gladly come back as often as possible — for Bloomsday, Hoopfest, skiing or whatever excuse. There are too many reasons not to.

2020 tried to drown us with fear and rage and resentment; it also produced this perfect new person

Yet even amid unbearable bleakness, small wonders and commonplaces give life its sparkle